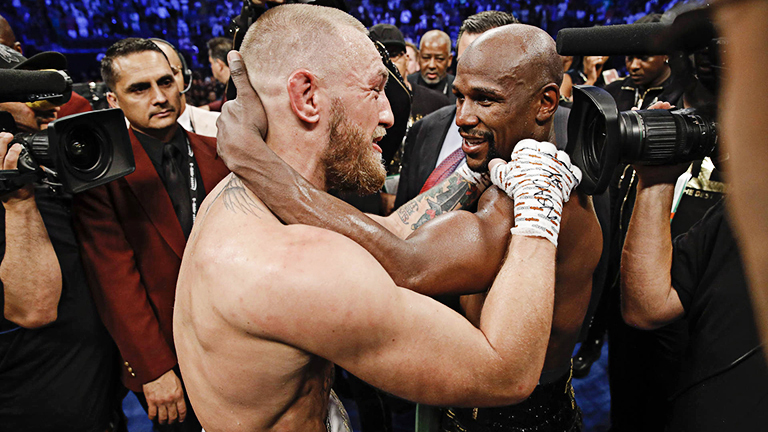 SKY SPORTS today told Boxing News that the Mayweather-McGregor event achieved in excess of 1m buys, and has broken the record set in April by Anthony Joshua’s titanic victory over Wladimir Klitschko. It also trumps the UK audience for Mayweather’s 2015 showdown with Manny Pacquiao.

This news follows reports in the USA that the August 26 contest – which ended when Mayweather stepped on the gas in the 10th round to halt an exhuatsed and outclassed McGregor – generated a massive 6.5m buys to beat the previous best of 4.2m set when Floyd Mayweather defeated Pacquiao. The figure of 6.5m, which came via Dana White, is thought to be on the high side, though; Showtime have not yet released the official sales number.

ROCKING AND ROLLING: As Mayweather attacks, McGregor wobbles back and the end is nigh

In the UK, Sky are still waiting on the counting process to conclude, but if early indications are correct, more than £20m was spent by consumers on the Las Vegas bout. Like it or not, it seems the ‘story’ of the fight, which at its core cast a debutant alongside an all-time great, was of of greater appeal to the public than any other boxing match in the PPV era.

While Mayweather-McGregor could go down in history as the biggest box office event in worldwide broadcasting terms, it failed to break the record for gate receipts. Despite promises from promoters ahead of the contest at the T-Mobile Arena would deliver between $60m and $80m, figures released by the Nevada commission confirmed a final figure of $55,414,865.79, which falls some way short of the $72,198,500 generated by Mayweather-Pacquiao at the MGM Grand two years ago.

It is thought the cost if tickets, which even in the nosebleeds commanded a fee of $2,500, were priced too high and the official 13,094 tickets sold might be deemed disappointing for organisers.

However, it must be said that Mayweather-McGregor – little more than an elaborate exhibition – continues to surprise.