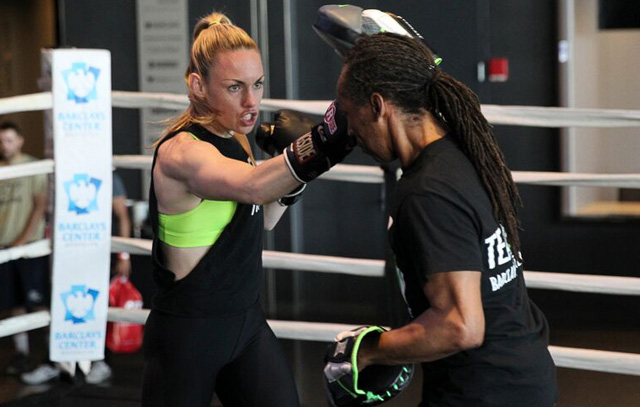 Heather Hardy and Noemi Bosques will box on the Khan-Algieri undercard. James Slater speaks to Bosques ahead of her big opportunity

Noemi Bosques, 32, will engage in what she herself says is definitely the biggest fight of her career on May 29th. Bosques, 8-2-2(2) will face the unbeaten Heather Hardy on the under-card of Amir Khan-Chris Algieri in Hardy’s hometown of Brooklyn, New York.

A big fight for women’s boxing, Bosques is hugely motivated for the challenge.

How familiar are you with Heather Hardy, is she a fighter you have seen lots of and know well?

Noemi Bosques: Oh, absolutely. I have followed her, even from when she was an amateur. She’s a really tough girl. She is in a bigger division than me at super-bantamweight so I never thought we would actually fight, but this is a huge opportunity, one I just had to take.

She told me her toughest opponent to date was Nydia Feliciano, who you lost a split decision to in your last fight back in March. Was that a fair result do you think?

I don’t think she won the fight. I think I won, or at the very least it should have been a draw. But it was my fault, I let it get way too close. I’d definitely love to fight here again and I’m sure I could beat her, hands down. I was actually sick the whole week of the fight (laughs). I would never use that as an excuse, I went ahead with the fight, that was my decision. Sometimes as a fighter you have to suck it up and get through a fight. I had so much invested in the fight; what with ticket sales and everything. But absolutely I’d love a rematch.

I read how you feel you have had the best camp of your career for this fight. Why is that, have you been doing things differently for this fight?

Who trains Willie Monroe Junior, he was very brave against Gennady Golovkin wasn’t he?

Yeah he was, he’s one of my favourite fighters right now. I worked with Tony Morgan for a week in San Francisco and I’ve also been training in White Haven and also in California, at Beautiful Brawlers. Those girls are tough! So I’ve had awesome sparring. This is the first time I’ve actually left my home to train, and I’ve not had to deal with ticket sales, I’ve not had to pick my child up from school, I’ve not had to look after my grandmother at home. I’ve been training twice a day. I’ve been doing lots of running. This week will be an intense week, with lots of sparring, then next week I’ll relax ahead of the fight.”

Is it fair to say this is easily the biggest fight of your career?

Is her WBC international super-bantamweight title on the line?

No, they didn’t put that on the line. Maybe they were too nervous to do that. It doesn’t really bother me. I’m sure they’ll want a rematch [after I win this fight] and I think they’ll offer it to be a title fight then.

How many rounds is the fight scheduled for?

Have you had enough time to get ready? When was the fight offered to you?

I’ve had around five weeks, which is a decent amount of time. Ideally I like to have eight or nine weeks but I always keep myself in good shape. And it’s good that the fight is at a higher weight division [than I usually fight at], as I don’t have to stress about losing weight.

Heather says she can be her own worst enemy in that she takes punishment so well and engages in tough fights. Do you see a war or a slugfest type of fight on May 29?

Not from me, no. That’s not the way I fight. I don’t get into slugfests. I like to fight smart. I know she likes coming forward, throwing bombs and I know I have to be smart and I have to be busy. I can’t let her out-work me. But I will not stand in front of her and trade, that is just stupid, especially with me being the smaller girl.

Your fight is on the Amir Khan-Chris Algieri card of course. How big a star is Khan in America and what do you think of him?

Absolutely he’s a big name. He’s one of the best in his division right now. I’d definitely have him ranked in the top-six at the very least.

And Hardy is fighting at home in New York. Do you expect a hostile crowd?

Yeah, she’s got a huge following. I know the majority of the crowd will be cheering for her. I will have some friends and family there supporting me.

We’ve both supported each other and now it’s time to face each other. It will be a hard fight and we’ll both come out of it having given our best. It’s just a case of may the best woman win.