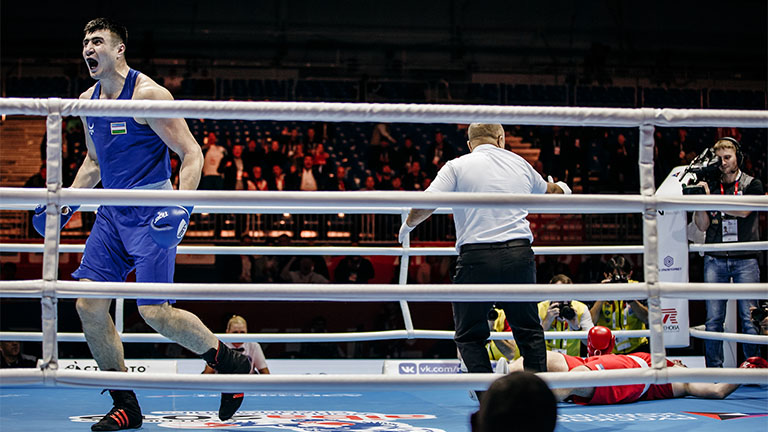 The debate around pros in the Olympic Games restarts. The Amateur Scene this week

AMERICAN super-heavyweight Richard Torrez can feel aggrieved. He is a good boxer but is now known for being the victim of a chilling knockout beneath an almighty cross from Bakhodir Jalolov at the recent World championships. Under normal circumstances Jalolov wouldn’t even have been in the tournament. He had already amassed a 6-0 professional record before returning to AIBA boxing.

The rules did change for the last Olympic Games. It’s up to national federations whether they want to select professionals, although the pros who made it to Rio 2016 made no impression. There has been a new round of criticism since Jalolov’s knockout, although it is hard to say that six pro bouts against humble opposition made the Uzbek any more formidable than, say, a season in the World Series of Boxing or even staying with his national programme would have.

The issue would become more controversial if big names were brought in for an Olympics. The Mexican federation have already called for their national stars, including heavyweight champion Andy Ruiz, to represent the country in an Olympics. That is hard to see happening but the WBC have still responded by threatening to ban any pros who participate in the Olympics for two years.

THE funeral of amateur boxing stalwart Harry Pinkney was held on Friday (September 27).

Meanwood’s Wayne Cunningham stated: “There is nothing I can write that will amount to the selfless dedication of Harrys commitment to Meanwood ABC and the sport of boxing. Harry no doubt has coached hundreds, possibly thousands, who have gone through the doors of Meanwood ABC over the decades, without doubt leaving an inspired impression on each individual to last a life time. Harry’s notable coaching style, gloves up get stuck in and work hard, brought many young individuals tremendous success. His personality and his love for others gave each person a friend for life.

“I would like to offer our condolences to Margaret and Sheila, our club chairman Mike Hall and other family members and friends.”

Denis McCann wrote to Boxing News to say, “Harry was a staunch amateur boxing fan, dedicated coach, friend, adviser and mentor to hundreds of boys in the Leeds area. He was involved with the sport since his only son Michael joined Burley ABC in the sixties and there was no prouder person when Michael won the ABA national championships and went on to box for England.

“When Burley were forced out of their premises (due to redevelopment) Harry along with Vince Flynn formed Meanwood ABC in the local working men’s club in the early seventies and in its earliest years had eight Yorkshire schoolboy champions in one season, which is a record still unbroken to this day. Meanwood went on to have many Yorkshire and national champions.”

“Harry was held in high esteem,” he continued. “He finally succumbed to old age in his 94th year.”

PRECIEUX Noka of Croydon ABC was named Boxer of the Tournament when the London Developmental Championships concluded at the Roundhouse, writes Daniel Herbert.

Noka won four times to lift the Class A 69kgs title – once on each of the three preceding shows at this venue (September 20, 21 and 27), and then against IQ’s Courtney Orr in the decider. Southpaw Orr shaped up well in the opening round, edging it with good lefts before stylish Noka went up a gear to take the next two sessions as Orr tired.

Also winning thrice to reach the finals was East London Boxing Academy’s Samad Fazil at Class A 75kgs – the difference being that his victories all had come inside the limit courtesy of thunderous punching.

But in the final London Community Boxing southpaw Marlon Walker exposed Fazil’s rawness by moving well and countering with jolting lefts for a tight but deserved 3-2 split decision. Fazil did land some solid blows, but too often he was left hitting thin air.

Likewise, New City super-heavyweight (Class A) Johnny Fisher won his semi in quick time only to come up short in the final. Brian Muwenge (All Stars) adopted the right tactics of getting inside to deny him punching room and was rewarded with a 4-1 split victory in a scrappy affair.

West Ham’s Seymour Simpson proved too strong for taller Brandon Lewis (IQ), winning unanimously in a Class A 81kgs bout that ended with both slamming away, to the enjoyment of the crowd.

Fisher flyweight (Class A) Hassam Hasim made good use of his height and reach advantages to take a unanimous win over Abdul Mahdi – the third time he has beaten the Dagenham boxer.

Cuban Academy had consecutive champions in Class A, with Aymane Bouhrfir and Rico Morris triumphing unanimously through stylish performances. Bouhrfir moved and punched smartly to beat Aaron Infante (IQ) at 56kgs before southpaw Morris dropped Claudiu Florin with a right hook in the first en route to a clear victory at 60kgs. A third Cuban Academy entry, southpaw Timon Asiama-Southgate, won the best of six Class B finals as he beat Thomas Hunter. A big left buckled the Finchley boxer for a count in round one but he rallied to lose only 4-1 in an entertaining battle.

Earlsfield had mixed fortunes in Class B. Ahmed Hatim won at 60kgs when Dagenham southpaw Michael Bankole was disqualified in round two for repeated holding, but at 81kgs Raph Brown (Left Hook) dropped Dominik Zieba with a right cross before another right had the Earlsfield boxer out on his feet on the ropes. It was called off immediately and fortunately Zieba recovered after sitting on a stool in the ring while the doctor tended to him.

Closing the show was a decent Class B super-heavy bout that saw Islington’s Odera Okwuosa edge a 4-1 split over Simon Ibekwi from White Hart Lane.

London now host Home Counties in a national pre-quarter-final at the Roundhouse on Sunday (October 6, start 1pm), with the winners then travelling to Southern Counties in the national quarter-finals.

SECOND City ABC held their first show of the season at the Crown social club on Friday September 20 and a full house saw a great night of boxing put together by Second City’s Paddy Farrell.

After four skills bouts the first competitive bout got off to a great start after B. Dyer (Second City) beat K. Everett (Solihull) by a split verdict from the judges. Both boxers gave a sporting and exciting display to the delight of the spectators.

Boxers from West Ham and Wales made the long journey to Birmingham and helped to make the show a success.

The last bout at 64kgs over three-threes between Remi Boxill (Second City) and Will Adams (Wildstar) put the seal on the evening with the strong come-forward Boxill, beating the stylish Adams by a unanimous verdict of all three judges. A return is a must – it was a cracker.