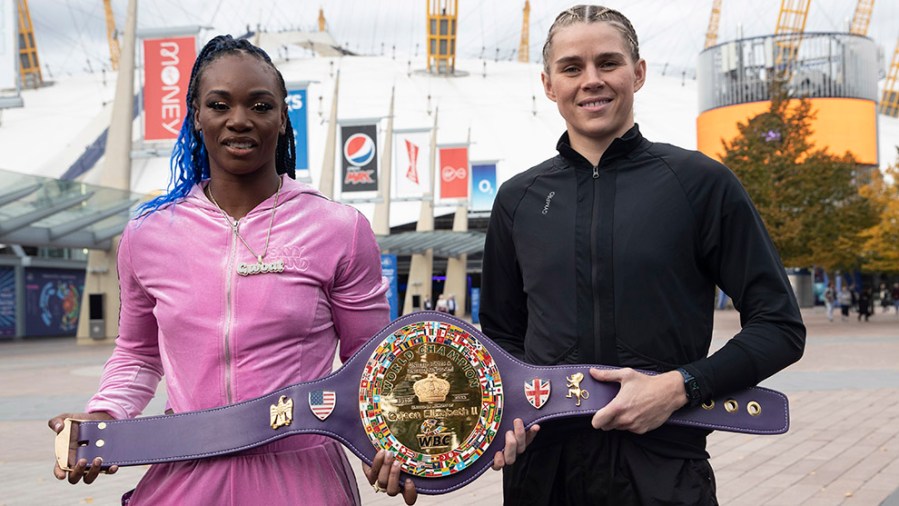 IF Saturday’s world unification middleweight showdown goes the way of the media conference, boxing fans will get full value for money.

Claressa Shields and Savannah Marshall squared up verbally at the Genesis Cinema in London’s East End just 48 hours out from their confrontation at the 02 for the IBF, WBA, WBC, WBO and Ring belts.

As if there was a shortage of titles, the World Boxing Council have chucked in the ‘Elizabethan Belt’.

Claressa’s GWOAT chain is just about the only piece of bling not on the line.

The verbals on the Mile End Road was certainly gripping. It mixed fire and mirth and went on for a long, long time, with neither of the main protagonists taking a single backward step.

With the two undefeated rivals perched on barstools on stage, the supporting cast were significantly fewer in number from the original media bash for this show, with only Claressa’s promoter, Dmitri Salita, joining BOXXER’s Ben Shalom and Sky Sports head of boxing development, Adam Smith, on the comfy chairs to the side of the stage.

Picking a winner from the presser looked as tricky as forecasting the fight itself, in fact, you might have had to score it as a draw, should it go the full 10 rounds.

When asked about the American’s claim that she will stop the Hartlepool girl inside the distance, the ‘Silent Assassin’ was dismissive.

“She can try to knock me out,” said Marshall, who was quick to point out that Shields had stopped only two of her opponents.

Both boxers are 12-0, though Marshall’s 10 stoppages are the most impressive, with each of her four WBO world title contests finished inside schedule.

“I’ve finished two girls and you are going to be the third,” countered the 28-year-old, from Flint, Michigan.

“She’s a bum and I’m going to show everyone on Saturday that there are levels.

“She’s going to get schooled, I am going to Sugar Ray Leonard her.

“I’m going to buy her a necklace after the fight that says ‘Silent Assassin shut your ass up’.”

Marshall also wound up the double Olympic gold medallist by answering, surely tongue in cheek, a question from the floor that suggested the pair might become friends after doing battle.

It was emphatically shot down by Shields who went on another rant, but the last, and most eloquent, word went to Shalom.

“They are both trailblazers, both have achieved so much,” said the promoter. “What Claressa has done is truly remarkable and the fact it is considered a 50-50 fight is testament to Savannah.

“We have an incredible fight on our hands and I think it will be a rivalry the sport remembers forever.”