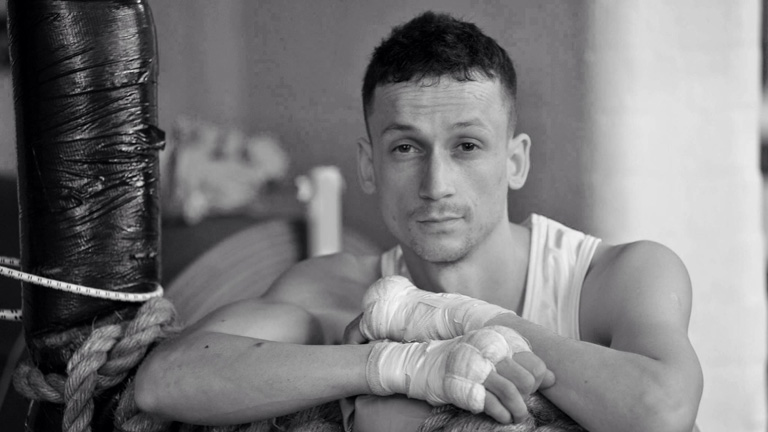 Sheldon Purdy is a boxer doing things his own way. Matt Bozeat on his remarkable progress

His manager, trainer and even his wife wondered what Purdy was doing when he splashed out £5,000 to bring Wicha Phulakhao over from Thailand to fight him in Leicester last November.

Phulakhao had twice challenged for the WBA strawweight title and by contrast, Purdy went into the eight-rounder as a 34 year-old novice of five fights who hadn’t boxed for 20 months.

“Ever since I started putting Sheldon on my shows, he’s never fought who I wanted him to fight,” sighed manager Carl Greaves. “He does it his way.

“His natural weight is around 7st 7lbs and he says there’s nobody really around at his weight in this country, apart from Ross Murray [set to box Kyle Yousaf for the vacant British flyweight title in Barnsley on March 20].

“He knows he hasn’t got long left, so he wants to get up there quickly. Nobody gave him much chance against the Thai…”

As it turned out, Purdy did know what he was doing.

“Sheldon boxed the kid’s head off,” is how Greaves remembers it.

Purdy won six of the eight rounds on the referee’s scorecard and next is an even more ambitious – and expensive – match. His opponent in a 10-rounder at Leicester City FC’s King Power Stadium on Saturday, March 14 is Alexis Diaz, a 32-year-old from Venezuela ranked No 10 by the WBA at strawweight.

Again, it is a fight Purdy has arranged – and paid for – himself. He says negotiations were lengthy.

“His representatives don’t speak any English,” said Purdy, “and every time they sent me a message, I had to go on Google to find what it meant and what Spanish words I needed to reply.

“I’ve got to pay out for a translator when they get here.”

On top of all his other costs. “It’s going to be £8,000 for his purse, flights and hotels,” said Purdy. “I’m hoping to sell more tickets than I’ve ever sold before and I should get some sponsors to help cover the cost.”

Purdy explained his thinking. “I could fight flyweights over here who are 10-0 and beat them,” he said. “I know I’m good enough to do that, but I won’t be remembered for doing that. If I beat this guy, I will get so much more recognition. I haven’t got that long left in boxing, so I might as well see how far I can get.”

To pay for the Diaz fight, Purdy is working seven days a week as an electrician and should he win, he then plans to reopen e-mail negotiations with WBA champion Thammanoon Niyomtrong.

“I will go back to them after the next one.”

It’s hard though to make a case for Purdy winning his next one. Only Niyomtrong and former IBF strawweight champion Jose Argumendo have beaten Diaz in his 27-fight career – and he has 17 inside-the-distance wins on his record. Unlike most of Purdy’s opponents, Diaz is, at 5ft 4 1/2ins, a similar size.

“This is another step up,” said Purdy, who stands around 5ft 6ins tall. “He’s a really good fighter. My opponents are usually a lot smaller than me and I look to control the distance, but he’s a similar height and reach.

“This is a completely different fight to the ones I’m used to.

“He has a high workrate and I will definitely know I’ve been in a fight afterwards.

“But he’s beatable. I will look to make him think, make him hesitate and then the gaps will appear.

“I know he’s only lost to world champions and I expect to beat him as well.

“I’m going to shock everyone.”

Should that happen, Purdy then plans to take the WBA title off Niyomtrong and target WBC champion Chayphon Moonsri, who’s won all 54 fights and is on course to rub Floyd Mayweather Jnr out of the record books if he keeps winning until he retires.

“I believe I can beat anyone at my weight and if you’re a boxer, you have to believe that,” he said. “The goal is a unification fight with Moonsri – and I know I can beat him.

“He’s 5ft 1ins tall, has a good double jab and works the body well. But he has to get to me – and that’s not going to be easy for him.

“I’m around six inches taller and I can make it difficult for him. He would probably think it’s an easy fight for him, but he won’t know anything about me because there’s not much footage of me on the internet.”

To fill in the gaps in Purdy’s story, he was born in Zimbabwe and moved with his family to Leicester when he was two years old. He only took up boxing after watching the Floyd Mayweather-Oscar De La Hoya fight and as an amateur with Belgrave ABC, he won the ABA Novice light-flyweight title in Class A in 2011, outpointing Sam Cantwell in the final.

Purdy turned pro with Clifton Mitchell, who was concerned he was too light.  In a good publicity stunt, Mitchell organised a sponsorship with a curry house to enable Purdy to eat his way up to 8st (112lbs).

He still lost his professional debut, to Kevin Coglan, and disappeared for four years to concentrate on work. The itch to box wouldn’t go away and Purdy got his licence back after convincing the Board he wasn’t returning at 30 for the wrong reasons. “How ironic is that?” smiled Purdy. “The Board thought I was coming back for money – and boxing has cost me thousands.

“Perhaps it’s not the smartest thing to do when I have a wife [Tammy] and young son [Romeo] at home, but I believe I can compete at this level.

“Anyway, what’s the point fighting journeyman at my age? I may as well go for it and see how far I can go.”