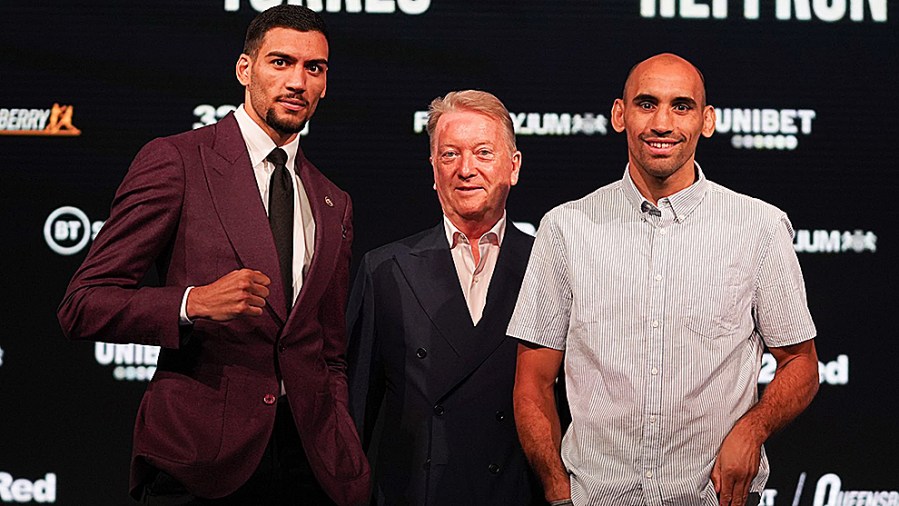 Sheeraz returns to the Copper Box after his infamous win over Bradley Skeete but Clarke-Heffron could steal the show, writes Declan Taylor

HAMZAH SHEERAZ returns to the Copper Box Arena for the first time since his infamous victory over Bradley Skeete – and this time he’s the headline act.

Just over eight months have passed since the Ilford youngster maintained his perfect record by stopping Skeete in the penultimate round of their 10x3s contest but it is a fight that is remembered mainly for what happened in round eight.

Sheeraz had legitimately dropped Skeete but unloaded with three further shots while his opponent was on the canvas. Steve Gray decided against disqualifying Sheeraz, who then went on to close the show a few minutes later.

He has since beaten Jez Smith, in just 3-38 of what was his debut up at middleweight, back in March, and he has now been given top billing by promoter Frank Warren for this showdown with Francisco Torres on a deep card live on BT Sport.

The Argentinean’s last outing was a 10-round draw with Jose Benavidez so this could be a decent yardstick of 23-year-old Sheeraz’s world level aspirations. It is worth noting, however, that Benavidez was facing Torres up at middleweight in his first outing since getting stopped by Terence Crawford at welterweight three years earlier.

Even so, the 17-3-1 Torres is durable and knows how to frustrate and survive. That means Sheeraz may have to show patience here before finding a finish in the late rounds.

“It has felt different preparing for a main event fight, most people would say it doesn’t but it does,” Sheeraz said. “I’m the centre of attention so I can’t afford any dodgy performances. You’ve got an Argentinean on a 15-fight unbeaten streak who just drew with Benavidez. His confidence will be through the roof. He will be thinking ‘who’s this skinny 23-year-old thinking he’s the shit?’ He will try and take it away from me which is a good thing. He will leave openings and it will make for a great fight.”

In what will likely be fight of the night, however, Lennox Clarke finally puts his British and Commonwealth titles on the line against Mark Heffron in a fight which was supposed to take place on the cancelled Demetrius Andrade-Zach Parker card in May.

Clarke won the belts by stopping Willy Hutchinson in March of last year but has not boxed since. Heffron, meanwhile, has chalked up two low-key wins at the Oldham Leisure Centre since he was stopped in the fourth round of his last British title challenge, against Denzel Bentley, in November 2020.

Both of Heffron’s previous defeats have come inside the distance and Clarke demonstrated his punching power against Hutchinson. And, although some of the momentum picked up that night may have subsided, Clarke by late stoppage seems a logical pick.

The other British title clash on the bill, between featherweights Nick Ball and Nathaniel Collins, fell through when the latter withdrew due to injury. Ball will still box though, with Nathaneal Kakololo of Namibia stepping in at late notice. Liverpool livewire Ball looks like one to watch and should become the first man to stop Kakololo.

Elsewhere, 12-0 (6) Dennis McCann steps up the 10-round level for the first time and may need all of them against James Beech Jnr.

McCann is still just 21 but his rapid progress has been checked slightly in his last two outings, distance wins over eight against Juan Jose Jurado and Charles Tondo. Beech has lost twice in his career, against Brad Foster and Chris Bourke down at super-bantamweight, but his best wins have all come up at feather or above. Again, this will be a good barometer of where McCann fits in on the domestic featherweight scene. He should win on points but it won’t be easy.

McCann’s gym-mate at the iBox Gym, Pierce O’Leary, makes his Queensberry Promotions debut on the stacked card over a potential eight rounds against 17-14 Robin Zamora, but don’t expect him to need many of them. The 22-year-old nicknamed “Big Bang” looks like a serious prospect with genuine power and could end this one at any point.

Another man who was also once described in a similar way, Ryan Garner, is also in action for the first time this year. Garner, now 24, has had his fair share of problems outside the ring and has boxed just twice in the last 30 months. The “Piranha” takes on Christian Lopez Flores and is desperate to show that he still has all the talent that marked him as one of Britain’s best young boxers a few years ago. It is hoped that an emphatic win here may put him in the frame for some kind of title fight in his next outing.

Islington’s Masood Abdulah takes part in the final eight-rounder of the night, against Tinko Banabanov, while highly touted Karol Itauma faces Michael Gazdik over six. There are also six rounders for Umar Khan, Sonny Liston Ali and Kahlid Ali while 1-0 Sean Noakes, 27, will want to be starting something against MJ Hall over four threes.

All of those men are currently undefeated and, in fact, all the 12 fighters in the home corner have just one defeat between them – Clarke’s split decision loss to Lerrone Richards in November 2019.