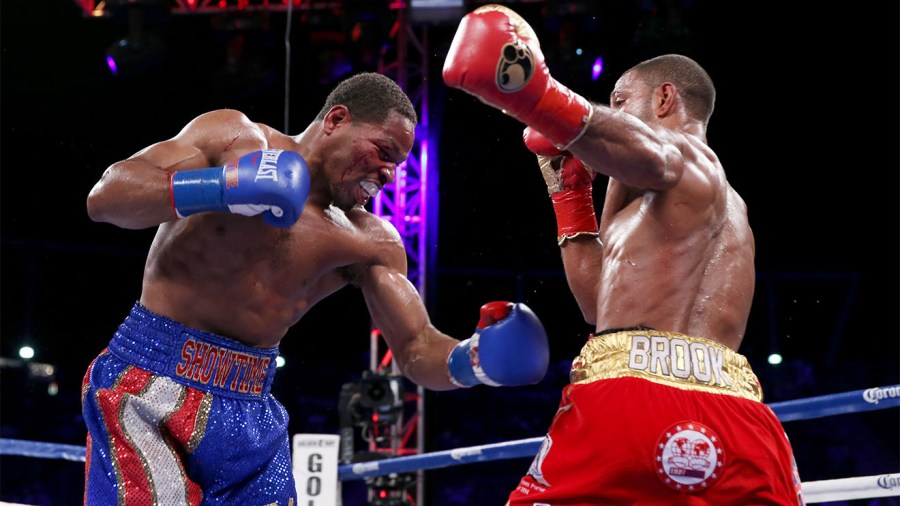 Shawn Porter has lost his two biggest fights. He tells Chris Walker how those cruel losses made him feel and explains why defeat will never define him

SHAWN PORTER sought comfort in his father’s arms. For the previous 10 weeks, the man now holding him close had been anything but gentle. He drove his son through physical and mental torture in preparation for another fight. But the early morning runs, the barely tolerable diet and relentless sparring had all been for nothing. Porter’s world title was now the property of Kell Brook and his undefeated record gone. The 2014 defeat was hard to take. The journey that came before had been far from easy. Today, Shawn Porter is a prominent member of the sport’s superstar-laden welterweight division but for so long he had been an anonymous figure. Sitting at the back of the boxing’s classroom while other pupils vied for the teacher’s attention, Porter preferred to wait patiently for the end of term exams.

In December 2013 he outpointed the highly rated Devon Alexander to become the IBF champion. Suddenly, people started to take notice. His subsequent mauling of Paulie Malignaggi raised further eyebrows considering the Brooklynite had proved himself to be one of the most durable fighters. Porter became known as the “Monster” after halting Malignaggi in four rounds. A monster who was expected to be too strong for Kell Brook.

“I don’t like to lose,” Porter tells Boxing News. Looking back on his first defeat is perhaps not a conversation he wants to have as he prepares for Saturday night’s unification showdown with Errol Spence Jnr. But the Ohioan draws inspiration from how defeat made him feel.

“Waiting for that [Brook] result to be announced felt like a long time and the longer it took for the scores to be read out, the more I thought I hadn’t done enough,” he continues. “I believed during the fight I was winning, but anything can happen when it’s down to the judges. There were big plans for me if I won that fight, but I just had to seek out my dad once it came out that I’d lost, and I knew he’d be there for me.”

The first setback of Porter’s career could’ve been the catalyst to derail the current WBC champion but he – in a way that Brook hasn’t – has remained in the spotlight. Confidence, which Porter claims was never lost, was boosted with a resounding stoppage over Erick Bone, and then came Adrien Broner, boxing’s constant opportunist, and a fighter able to restore some of Porter’s tarnished credibility. Porter ran out a wide winner on the scorecards in June 2015 despite a last round scare where he was momentarily dropped by the only meaningful shot landed by the reckless Cincinnatian.

“Too many put too much on that Broner fight,” Porter recalls. “It was like we were both fighting for our careers, but in reality, I was always going to be alright. A loss to me is a lesson and the Kell fight was a lesson. I ain’t going to be like one of those fighters who has one defeat then all type of craziness goes on in their life and they’re never the same again. It ain’t nice to lose and I don’t like being around people when I lose, but I’ve put too much into boxing and into my life to be a success for me and my family, so I keep going until get where I want to be.

“Against Broner, I didn’t look at it as a ‘must win’ fight because it meant I had nowhere to go afterwards, I looked at it as a must win fight because that’s how I treat every fight. One loss in boxing has taught us in the past that there’s no way back, but I wasn’t going out like that. I approached Broner the way I approach every single one of my fights and that’s to win. I’ve wanted to be the best welterweight in the world for a long time. Brook put that on hold for me, but I resumed immediately afterwards.”

Success against Broner didn’t bring Porter a world title, but it did provide a platform for a lucrative fight with Keith Thurman in 2016 as the 147lbs landscape altered following Floyd Mayweather’s brief retirement the previous year. Thurman, along with Spence and Terence Crawford, were identified as the three men to hoist the famed division forward. Standing in his way was Porter.

Their clash in Brooklyn, a ferocious battle that frequently seesawed, could’ve gone either way, but it was Florida’s Thurman who squeezed the 12-round verdict by the narrowest of margins. Accused of not doing enough against Brook, Porter was impressively industrious in his approach against Thurman. He was unfortunate not to get the nod. But in another high-profile meeting, Porter had fallen short once more. Was he concerned that a major win was out of his reach?

“I can’t think like that,” laughs Porter, somewhat bemused by the question. “I’m going to say that my effort against Thurman wouldn’t have happened if it wasn’t for the Brook fight. What I took from the Brook fight allowed me to improve and become much better and I think you seen some of that against Broner, and then you seen it against Thurman.”

“I’m at a level in boxing where I want to be fighting the best and I think you’d agree that I’ve been in with some good names over the years. I’ve had two losses, two very closes losses, and on different nights they may well be wins. I know I’m at the very top level. There’s no doubting that.”

Like Brook, Thurman failed to build on defeating Porter. He spent the bulk of the following three years nursing multiple injuries before falling to the evergreen Manny Pacquaio in July this year. In that time, Porter has once again demonstrated a superb ability to rebound from adversity with a number of notable wins over Andre Berto, Danny Garcia, and most recently, Yordenis Ugas.

Next up, the unbeaten Errol Spence Jnr who is many experts’ choice as the best welterweight on the planet. The extent of the task ahead is not lost on 31-year-old Porter.

“Errol is going to be my biggest test. He’s big, he’s young, and he’s fresh. It also helps that he can fight like crazy too. The thing is though, he’s facing me when I pretty much know all there is to know. The Shawn Porter you saw against Brook may not have beaten Danny Garcia. The Shawn Porter against Keith Thurman might not even have been good enough. I promise everybody that watches this fight, you are getting the best version of Shawn Porter you’ve ever seen, and I know that’s good enough to beat Errol Spence.”

A third defeat for Porter on boxing’s grandest stage, like any major loss, is certain to prompt inquest into his legacy when analysing his credentials against leading champions and contenders. A two-time sanctioning body champion with a respectable victim list, Porter has flirted with the top five in a red-hot welterweight division for several years. But those nights facing Brook and Porter stand out when observing his ledger. A further loss to Spence could mean, in a nod to the cruel way that boxers are judged, he’s remembered more for losing his biggest fights than winning all the rest.

“The public can label me whatever they want as they have that choice, but there’s no way I’ll ever look at myself as anything but a success,” Porter argues. “My goal was to become world champion and go on this crazy journey where my family got to see everything, and they shared every bit of success that boxing gave me.

“Granted, they’ve had to endure a couple of bad moments along the way, but we happy and we still got a long way to go. I’ve been hurt by boxing a few times, but I’ve never refused to give up on my dream just because I’ve lost a fight or two.

“The fact I’m still here now after everything I’ve been through with this sport tells me that I’m doing just fine so hopefully that continues.”