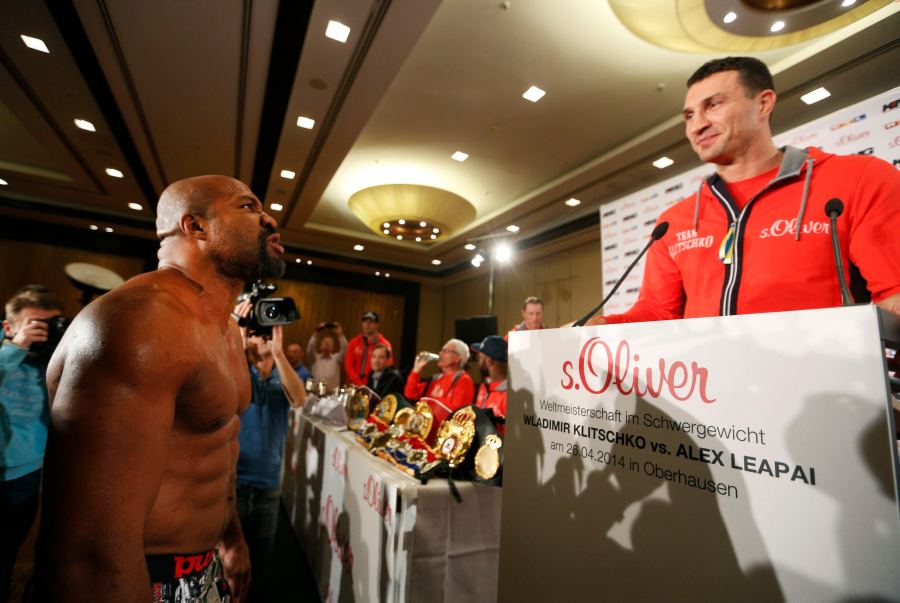 BRACE yourself for the Shannon Briggs show because it might be coming to a town near you, and if not you can catch all the fun by going to YouTube.

Understand this about Shannon, he is not the crazy maniac he sometimes makes himself appear. All his antics are designed with one purpose in mind, to coax heavyweight champion Wladimir Klitschko into giving him a shot at the title. Heaven forbid Briggs should be asked to earn his opportunity the old fashioned way by beating contenders inside of the ring. A well orchestrated gimmick will do just fine, thank you.

Briggs’ goal of bringing attention to himself is working, whether it is bringing him any closer to a fight with Klitschko is another matter. As the Klitschko saga continues, so has the perception of Briggs. He has gone from endearing, to amusing, to annoying, to downright embarrassing.

There is an air of familiarity to Briggs’ act because we have been down this road before. After losing to Sultan Ibragimov in June 2007, in an unsuccessful bid to lift the WBO heavyweight title, Briggs took off two and a half years. When Briggs returned he had four fights against a series of no hopers in three different cities, winning each via first-round stoppage. One though, was called back and ruled a No Contest when Briggs tested positive for an illegal substance.

The sight of the four men crumbling at his feet jump-started Briggs’ career. Shannon started making noise on how he would destroy WBC heavyweight champion Vitali Klitschko. Briggs’ gift for marketing himself resulted in a shot at Klitschko’s title in October 2010, in Germany. Briggs’ lottery punch never materialised, but he showed enormous courage in absorbing a terrible beating over the 12-round distance. Briggs was hospitalised and reports emanated that his life was in danger. Fortunately he recovered. Which brings us to another issue that no one has raised, given the damage that Briggs sustained in that fight should he even be licensed to box?

Briggs’ career appeared over, but then last April he emerged three years after the loss to one Klitschko with hopes of fighting the other. History then repeated itself. The carnival started in Tampa and then moved to Minnesota, West Virginia, and Oklahoma City. The first three ended in one-round blowouts to make Briggs appear like the monster he is not. The fourth fight was a slight blip as Briggs was taken the full 12 rounds by Brazilian Raphael Zumbano Love, a durable but mediocre journeyman.

Make no mistake about one point, Shannon Briggs is an extremely bright individual. He knows that the road to any big-money fight goes through Wladimir Klitschko, the true heavyweight champion of the world, not some silly belt holder. At 42, the chances of him earning an opportunity on merit are slim. In all likelihood he would get beat for short money if he tried. A fight with Klitschko would pay enough that even if Shannon lost, he still would win. And of course he has probably convinced himself that he can somehow tag Klitschko and get him out of there. Because Klitschko has been stopped three times there is a perception that he is vulnerable against a hard puncher. Perhaps that is correct, but the evidence does not really support it. The stoppage losses to Ross Purrity and Lamont Brewster were a result of exhaustion, not durability. Hard-punching Corrie Sanders did stretch Wladimir in two rounds, but that loss and the other two were many moons ago.

To move to the front of the line, to bring attention to himself Briggs needed to do something drastic. Hence this latest campaign in madness.

It all started with Briggs showing up at Klitschko’s camp in Florida, challenging him, and throwing a shoe in the champion’s direction from outside of the ring. Klitschko, who thought that he and Briggs were friendly, seemed amused. So did the rest of us who understood what Briggs was trying to do and did not think he was really trying to hit Wladimir with the shoe.

The next time Briggs invaded the champion’s training quarters he edged a bit closer. As Klitschko was once again shadow-boxing, Briggs came into the ring and joined him. Shannon mumbled something designed to upset Klitschko and then started to shadow-box beside him. Although there was no more than mock anger from Briggs, Michael Moorer sensing things could escalate, quickly climbed into the ring and moved Briggs into a corner away from Klitschko, who calmly stepped forward letting Shannon know that he would knock him out if he got out of line. Briggs was once again escorted out of the gym yelling that Klitschko was ducking him.

The third encounter took place in a restaurant as Klitschko was having his meal. Briggs sat down at his table, grabbed his plate and started to help himself to the champion’s food. Very calmly, Klitschko asked Briggs if would he like to have a drink with the meal, then proceeded to pour a glass of water over his head. Briggs went crazy, grabbed the glass, cutting his hand and was dragged out. Notice that at no point, then or at any of their encounters did he attempt to hit Klitschko. My sense was that beyond the histrionics, Briggs was fearful of what Klitschko might do to him if they started to throw.

Briggs likes to take off his shirt and show off his physique as proof that this is no publicity gimmick, that he is in great shape and ready to rumble. And he does deserve credit for at least training like an athlete, even if he is a somewhat diminished one. At 55-6-1 (48), Briggs’ career numbers are impressive. He won a WBO heavyweight title, and the lineal one off of an ancient George Foreman in one of the worst decisions in heavyweight history. Lennox Lewis stopped Briggs in five rounds, but Shannon hurt Lewis pretty badly in the opening round. Lewis’ trainer Emanuel Lewis would later say that his man was close to being stopped. So despite his antics, Briggs has had a successful career, even though it never did reach its full potential

I remember Briggs chatting with people in the lobby of the Turning Stone Casino, in Verona, New York, in June 2005. Earlier in the evening he had won his ESPN telecast bout. Mike Tyson had boxed the same night at Washington, D.C, being halted by Kevin McBride. Tyson then announced his retirement. Briggs was philosophical when he amicably chatted with fans afterward. “It’s bad for business,” he said, doubtless seeing a huge potential payday evaporate. Briggs was still a real fighter at that point, something he either feels he can’t be or does not want to anymore.

Maybe Briggs will continue this charade by following Klitschko to Germany for the champion’s next fight. Let’s hope not. One Mitch “Blood” Green was enough, we don’t need another.