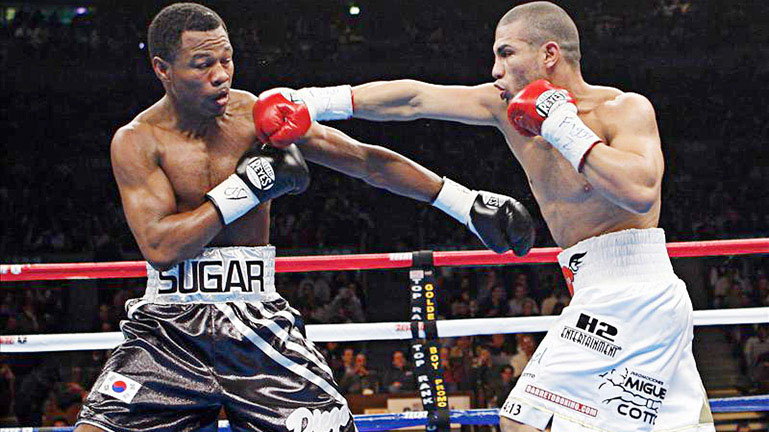 Former world welterweight champion 'Sugar' Shane Mosley assesses the division he ruled and left behind and makes his Spence vs. Porter pick

‘SUGAR’ Shane Mosley acknowledges he was probably at his best as a lightweight yet ventured to super-welterweight for big-money fights and is best known for his exploits as a welterweight.

At lightweight he won the IBF title and defended it eight times, all by stoppage, while at welterweight he defeated Oscar De La Hoya in 2000 to take the WBC title and then defended that belt three times.

Now, three years after he left, the division is headed up by Americans Errol Spence Jnr, Terence Crawford and Shawn Porter, as well as Manny Pacquiao, a legend Mosley knows only too well.

This Saturday (September 28) at Staples Center, Los Angeles, the scene of Mosley vs. De La Hoya 1, Spence and Porter will put their IBF and WBC titles on the line in a unification fight, and Mosley, one-time ruler of their weight class, will be watching with interest.

“I lean towards Spence,” Mosley told Boxing News. “He’s not really bigger but he’s longer and that’s going to give Shawn Porter a lot of problems. He’s going to have to jump in to try and get to him. He’s a southpaw as well.

“Shawn Porter doesn’t seem to have one-punch power. He’s got punching power but it’s not extreme punching power. He has great strength, though, and he knows how to use it well to his advantage.

“I’m not sure how Errol Spence deals with somebody inside who is crowding him the whole time, but I know that he’s longer and that is going to make it hard for Shawn to jump in without taking something back. He needs to smother him and rule the fight that way, but that isn’t going to be as easy as it sounds.

“That seems to be the only way he can fight Errol Spence if he wants to win. He needs to get on his chest and bang away. I can’t see him outboxing Spence.

“But you never know. It could be a funny style and Porter could just end up being all over Spence, hitting him with all kinds of shots. We’ll find out.”

Mosley is reluctant to call Spence vs. Porter a fight for the number one spot at welterweight but concedes Spence, his favourite, could end up emerging as the best of the bunch.

It has to be proved, though, the Californian is quick to stress, and it can only be proven in fights against Crawford, the WBO champion, and Pacquiao, the WBA champion.

“I think Errol Spence, on paper, looks like the best welterweight, but they have to fight it out to see,” said Mosley, 49-10-1 (41). “It’s another of those situations where it’s hard to say until these guys have fought each other.

“Spence might have a style that makes him look bad. He might have an opponent whose style gives him trouble and the guy ends up beating him.

“Spence against Crawford would be a ‘Sugar’ Ray Leonard and Tommy Hearns type of fight. Hearns was winning the whole fight but ‘Sugar’ Ray came back and knocked him out. That’s how closely matched they were. These two might be similar.

“I rate Crawford near the top. I also rate Pacquiao near the top. Even though I think Pacquiao should be coming to the end, he has had so many big fights and been knocked out more than once. I still wouldn’t write him off.”

Mosley retired in 2016 at the ripe old age of 45 and says had it not been for an arm injury he would likely still be fighting now at 48.

Coming to the end? Written off?

Forty-year-old Pacquiao, when compared to Mosley, is brimming with freshness at this stage. “True,” said Mosley, laughing. “I can’t argue with that.”

“Now he comes up to welterweight and he’s fighting these younger guys who know how to fight but I don’t really know if they have it like we had it. You know, in our heart, to go out there and bang it out. They’re good and they’re doing good stuff, but I don’t know if they’re showing the same type of grit that we had coming up.

“Sometimes they go for it. You’ll have some guys who try. Errol Spence will try. Even Keith Thurman fought really good, I thought. He did better than I expected when he got hit and knocked down.

“I was actually impressed by him. I thought he did a great job of fighting back. He was trying to knock Pacquiao out and that’s great. I didn’t think he was going to be that gritty.

“But a lot of the fighters of this era are not really gritty like that. That’s why Keith Thurman was champion. He had more grit than most of them.”

Gritty or not, it wasn’t enough. Thurman fought well but failed.

It’s now up to the likes of Spence, Porter and Crawford to make Pacquiao feel his age. It’s up to them, the new breed, to provide reminders.