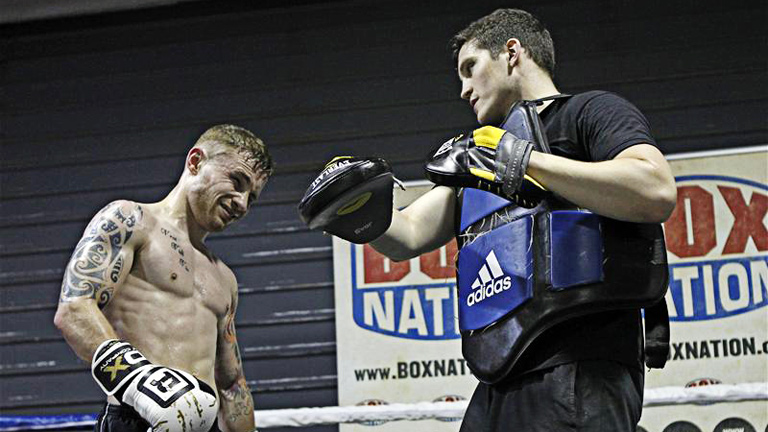 CARL FRAMPTON’S trainer – Shane McGuigan – has slammed Scott Quigg’s team for ‘clutching at straws’ ahead of their super-bantamweight unification clash on February 27.

Frampton and Quigg will put their unbeaten records on the line for the IBF and WBA world titles at the Manchester Arena and the build-up has been surprisingly fiery so far.

Quigg and his team have made several claims that Frampton has been knocked out in sparring but McGuigan points to Carl’s unblemished CV as proof of his class.

“They keep talking about sparring, we’ve had 21 fights. They’ve had so many chances to see Carl vulnerable in the flesh but he hasn’t shown that. If you look at Carl’s fights he’s always either won by knockout or unanimous decision whereas Quigg’s had draws and close fights.”

Quigg has also highlighted Frampton’s last fight – a unanimous decision over Alejandro Gonzalez Jnr in El Paso, Texas – as an example of his supposed weaknesses.

The Ulsterman was dropped twice in the opening round, the first time he has met the canvas as a professional, before going on to claim the decision and McGuigan warned Quigg from taking too much from that fight.

“You can never take confidence or a game plan from one fight,” he said.

“Carl wasn’t up for that fight, I’ll openly admit that. He thought he’d win it easily, he was out of his comfort zone in El Paso [Texas] but at the same time, it’s something that will help him in this fight because he’s going to Manchester. Scott Quigg doesn’t know how to deal with that, he’s never been out of his comfort zone.”

Indeed, Quigg has only fought outside of North West England once as a professional – a 12 round draw with Yoandris Salinas in London in 2013.

His trainer, Joe Gallagher, has also gotten involved in the pre-fight verbal sparring though McGuigan takes pride in the relationship he has with his man.

“Joe Gallagher is a good coach, but they don’t gel as well as me and Carl,” he said.

“I’m relishing the chance to go up against Joe because I’ve never done it before. I’m working with a legitimate world champion as my first fighter, that’s something Joe can never say.

“I believe Quigg is improving from his sparring with Anthony Crolla and Stephen Smith, not from pads and advice from Joe.

“I’m very good friends with Carl Frampton, we are a team. We work really hard every day and there’s more to life than money and business and boxing, we’re friends at the end of the day and that’s what will get us through this fight.”

The 27-year-old also claimed Quigg will be ‘out of his depth’ against Frampton and questioned the Bury man’s ability to deal with powerful fighters.

“Quigg looks great against non-punchers, but he doesn’t look good against punchers, he gets terrified.

“Carl’s a ballsy bastard, he believes in himself. Quigg got rocked a few times by Salinas from jabs and tucked up and gave away far too many rounds – if he does that against Carl, he’s getting smashed up.”