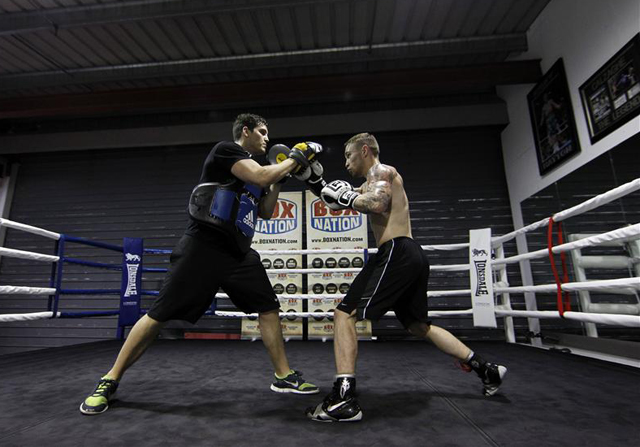 CARL FRAMPTON did not dazzle on his American debut. He had unexpectedly trying afternoon’s work with Alejandro Gonzalez but carved out a points victory in what was ultimately an exciting fight.

Frampton was coming off the back of two excellent performances in the cauldron-like atmosphere of his Belfast hometown, most recently against Chris Avalos. “We want someone to get him switched on but it takes a special fighter to get him switched on,” his trainer Shane McGuigan said. “I thought Avalos was a perfect performance. You can’t pick holes in that. It was exactly what was needed for that night. One of the things we found was Avalos was slow. [Carl] finds them easier to hit because they train at a slightly slow intensity. They might do longer rounds and longer hours but they don’t have the gears to go through.”

McGuigan explains the key elements to Frampton’s success, “He’s got very good distance control and he’s extremely explosive, he’s got good feet and feet are I think what speeds everything up and make people fall short. Good fighters they’ve got that, they can creep back and they can make you miss by a little bit and then they can come in with their shots. Domestic level fighters make you miss but they try and throw slightly too far back out and they miss the next phase. That’s what having a good amateur pedigree and having good schooling can do for you. What I find with a lot of good amateurs making the adjustment into the pros, they completely forget all their schooling.

“With the small gloves on, you don’t have to hit guys hard. All you have to do is make them miss and chip away and the next thing you know you’ve busted them up. As long as you hit them with half decent power and you’re hitting them clean, then they’ll go. That’s one of our theories. We don’t go loading up, take your time and when the level of opposition steps up, especially for prospects, they’ll show their real class because they get quality sparring in the gym.”

“Every time Avalos went to open up he just hit him with three or four punches,” he noted. “He’s so quick, he lets guys start and he throws with them and that’s when they’re most vulnerable.

“Top quality amateurs they can do that. They’ve just got that edge. Having that amateur background is just key. It’s so key. Because slipping and sliding and staying in the pocket and rolling and blocking, it’s easy to teach. But it’s not easy to teach ‘when he opens up, throw with him’ because it takes belief to do that, schooling and sparring at a top level to do that. That’s why we always look at quality amateurs because they’ve got that background, it’ll be easier to teach the rest of it. Carl had it, Conrad [Cummings] had it, Anto [Cacace] had it, Josh Taylor’s got it. The only person that didn’t is Josh Pritchard but he’s only 20. Whereas Carl is a world champion in 19 fights, Josh Pritchard will be more like Scott Quigg, where he’ll have to have 25, 30 fights before he gets on to the world stage. He’ll get there.”

Frampton tends to do long camps, between 13 and 14 weeks of training for his last fight and he started sparring eight to 10 weeks out from the fight. “He does six rounds, six rounds, six, rounds, then it’s seven, seven, seven, eight, eight, eight, then he’s does two weeks of eights, then he’ll go to nines, then go to 10s, about three weeks out he’ll do 10 on a Monday, 12 on a Wednesday, then 10 on a Friday, then eight on a Monday, six, six and that’ll be his sparring, so it keeps it up and then we drop it back down. He does two sixes and then he’ll finish his last spar on the Friday a week before the weigh in. It means you’re easing the body into taking punishment,” Shane said.

There are exciting fights out there for Frampton, Scott Quigg being one of the most appealing. “I still have hope that it’s going to get made. I think it will. I think it’ll be a shame for it not to get made,” McGuigan said. “I think he’s a really good fighter, I actually do. But I just think he can easily be outboxed and it won’t take a Sugar Ray Leonard to outbox him.”

He considers Nonito Donaire a dangerous choice for Frampton’s rival, if that is next. “He’s past it but he still can punch, he’s a really hard puncher. You don’t lose that. [Guillermo] Rigondeaux, I can’t see Quigg getting close to him, where I can see Frampton definitely getting close to him and giving him a really hard fight. Quigg-Santa Cruz, that would be a tough fight but I think Quigg can beat [Leo] Santa Cruz. But that fight won’t happen at all,” Shane said. “Carl wants to fight Rigondeaux but he’s not going to fight Rigondeaux for nothing and that’s just the way it is. It doesn’t make any business sense and if you’re going to fight a guy like Rigondeaux, you want to get paid. If we can do that later on, that’ll be ideal.