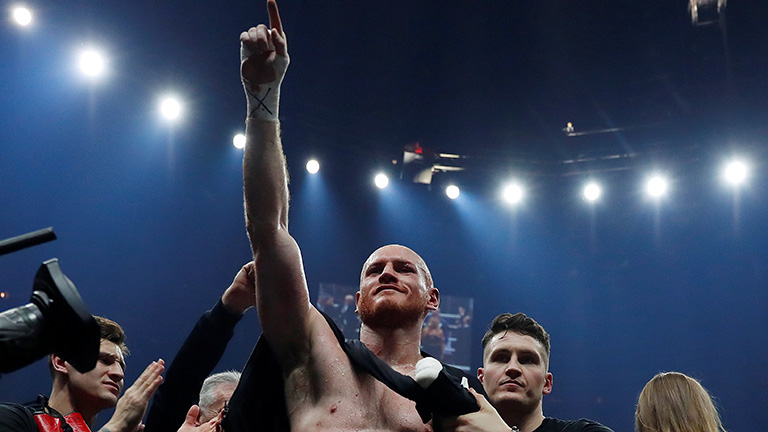 GEORGE GROVES’ team is taking travelling out to Saudia Arabia for the World Boxing Super Series final against Callum Smith in their stride.

Their major concern would be having to fight outdoors but the exact venue for their WBA super-middleweight title fight is still to be confirmed, although the date will be September 28. “Jeddah’s paying a big sum, it’s covering all the risk. We’re getting guaranteed money so we’ve just got to go with it,” Shane McGuigan, George Groves’ trainer told Boxing News.

Groves dislocated his left shoulder at the end of his semi-final with Chris Eubank Jnr. But McGuigan is adamant that it will not be a problem for the champion in Saudi Arabia and is confident the same injury won’t re-occur. “I just wouldn’t let him go in [if he wasn’t fit],” Shane said. “The percentage of it coming out it is like 0.2% because he’s got two bolts in.

“We’ve got it put back in, put bolts in so it’s stronger than the other one. There’s less chance of that coming out. There’s more chance of the right one coming out so that’s good for us.”

He does however believe that Smith will put up a sterner challenge than Eubank Jnr. “I think it’s going to be a tactical fight more than a gruelling fight. I just don’t think he’s tough enough to walk into George all day long, getting hit by a real big puncher like that. It’ll take the confidence away from him. But he’s the best Smith brother out there, in terms of he’s got that relaxed mindset but he’s also probably the sharpest out of the lot. I don’t think it’s going to be a typical Gallagher tactic, just put your hands up and walk in, try and get us to tire out. He’s just not tough enough. He’s from the same DNA as his brother and his brother got chinned. I think he’ll try and punch long with George and he’ll be dangerous early. Both of them will be dangerous early,” McGuigan said.

“I thought Eubank would probably be a more physical fight but he was a bit of a rabbit in the headlights anyway so it’ll be interesting to see. It’s the pedigree [of Callum Smith], someone who’s boxed at that level as an amateur as well. The pedigree’s in his favour so it’s definitely going to be a harder fight [than Eubank].”