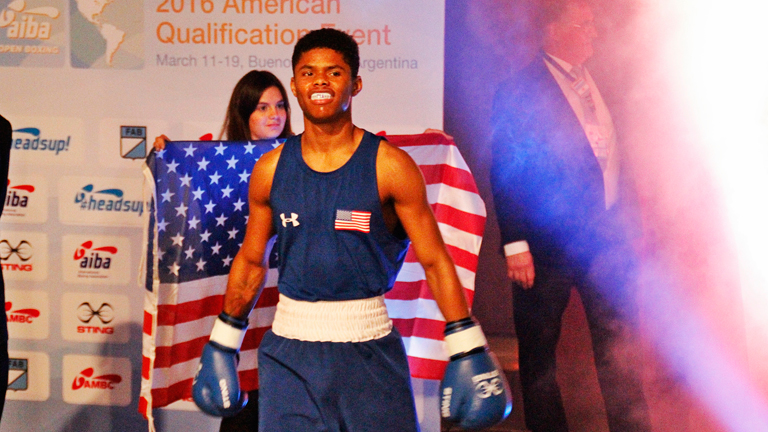 Alongside Ward, James Prince and Josh Dubin will co-manage the talented 19-year-old, who looks set to make his professional debut in April, though a date and venue have not yet been nailed down.

Details of the promotional contract were not disclosed, but Stevenson will box at featherweight as veteran promoter Bob Arum seeks to turn him into boxing’s next superstar.

.@ShakurStevenson is a great signing for @TRBoxing. We are going to make history together on his road to superstardom.

Stevenson came close to becoming America’s first gold medallist since Ward in 2004 when he made it to the bantamweight final in Rio last year, though he was edged out by Cuba’s Robeisy Ramirez.

Fans missed out on an amateur blockbuster between Stevenson and Belfast’s Michael Conlan, who was notoriously defeated by Russia’s Vladimir Nikitin at the bantamweight quarterfinal stage.

Conlan has also turned professional with Top Rank and will make his debut in New York on March 17 – an inevitable fight between he and Stevenson in a few years could be huge.

Arum and Top Rank have helped develop other Olympians like Oscar De La Hoya, Floyd Mayweather and Miguel Cotto into international megastars, and hope to do the same with the highly decorated Stevenson.

No problem and goodluck mate, see you at the top v https://t.co/DeGmhN52sm

While Ward is still an active fighter, his move of becoming Stevenson’s co-manager backs up his previous suggestions at retirement. In November, he outpointed unified light-heavyweight champion Sergey Kovalev on a razor-thin decision. He maintains that a rematch is the only fight he is interested in.