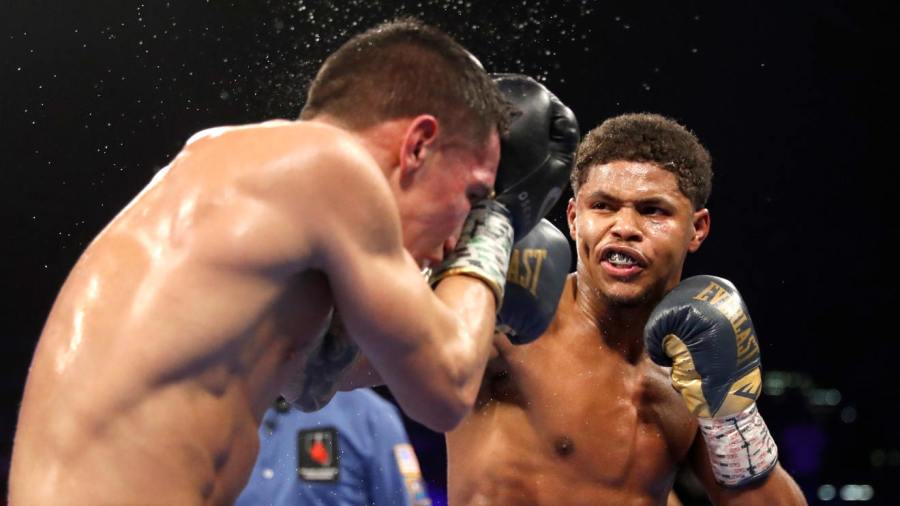 Shakur Stevenson appears to have that special something as he dominates Oscar Valdez, writes Declan Warrington from Las Vegas

IF OCTOBER’S victory over Jamel Herring was the night the talented Shakur Stevenson matured into a convincing world-level fighter, Saturday’s, over Oscar Valdez, was when he blossomed into one of the elite.

He had long been recognised as one of the world’s most promising fighters, but at Las Vegas’ MGM Grand, where so many other greats furthered their reputations before him, the world super-featherweight champion so convincingly outboxed his strongest divisional rival that he demonstrated that for the coming years he will remain one of the very best.

At 24 Stevenson, whose significant advantage in size over a titlist seven years his senior unquestionably contributed much to his dominance, boxed with a maturity beyond his years, complementing the athleticism that will no doubt take him up to lightweight and potentially beyond with a composure and ringcraft that showed the extent of his gifts.

The 10,102-strong crowd was not only mostly comprised of those there to support the previously undefeated Mexican, from Sonora, it was also the Mexicans present who were determined to make themselves heard. Stevenson, from New Jersey, therefore made his way to the ring as would the away fighter at a hostile venue, and yet shrugged off the atmosphere as effectively as he did Valdez from almost the opening bell.

Valdez’s greatest chance of success came in forcing Stevenson into the kind of attritional, physical affair he typically relishes, imposing a high tempo, and fighting at close range. He instead consistently found himself struggling to close the distance between them, and therefore also to pick his punches.

As early as the first round there was an exchange that effectively captured much of what was to follow. Already struggling with Stevenson’s dimensions and his southpaw stance, Valdez clumsily lunged forwards and was punished when countered with a sharp left hand. He resumed unconvincingly attempting to cut off the ring, but Stevenson remained comfortable, occasionally landing single shots before an eye-catching combination, and in return swallowing only a left hand that was followed by an ineffective flurry.

That same focus meant successive left-right combinations landing in the second, in addition to equally accurate single shots that discouraged Valdez from advancing even after he landed with a right. Though there was little doubt he would ask questions of Stevenson, by the end of the second the younger fighter already appeared to have figured him out.

While on the back foot during the third, Stevenson watched Valdez wildly swing and miss, and responded by landing a strong right hand; when successive lefts forced him back towards the ropes where he could have been vulnerable, he countered with a right and a sharp left.

By then a further pattern had emerged – one evoking a trait shown against Herring, and increasingly key to the fighter Stevenson has become. Well before required to he left his stool, stood tall, and stalked Valdez until the Mexican was also ready; when he was, Stevenson resumed punishing him with the jab and, if Valdez dared attempt to find a way past it, authoritative left hands.

It was in the sixth when another familiar pattern led to the fight’s only knockdown. Stevenson’s speed meant he landed a right hand just before Valdez swung with a left and missed to such an extent the combination of his loss of balance and the punch he had just taken sent him into the ropes and down. When he then took a left to the body just before the round’s end, his unhappiness revealed how disheartened he had become.

He would therefore have taken encouragement from the seventh when, for the first time, Stevenson showed signs of being hurt. The American’s confidence was such that he was almost treating the slowing Valdez with disdain, but he eventually got caught by the ropes, where the Mexican started landing, after which Stevenson’s attempts to celebrate winning the round when it ended only served to confirm his opponent’s success.

Valdez continued to mostly neglect his jab and to an extent Stevenson, also warned by referee Kenny Bayless for a headbutt in the 11th, had the freedom to coast. When most of those present rose to their feet towards the fight’s conclusion, whether in anticipation of one last futile assault from Valdez or in appreciation of what they had seen, the showman in Stevenson, who afterwards took a knee on the canvas to propose to his girlfriend, chose to stop fighting and do a victory lap of the ring.

Judges Tim Cheatham, Dave Moretti and David Sutherland respectively awarded him scores of 117-110, 118-109 and 118-109. Boxing News, incidentally, scored him the winner via a score of 119-109, having struggled to reward Valdez for much beyond his improved seventh round.

On the undercard, Keyshawn Davis also showed significant potential throughout the course of five one-sided rounds before stopping Esteban Sanchez in the sixth at super lightweight. Not unlike in the main event, Davis, of Norfolk, Virginia, used the aggression of Enseneda’s Sanchez against him, making him miss while landing with admirable timing and precision, and in the third rocking his head back with a powerful left uppercut. The fifth round was so one-sided the referee Robert Hoyle considered intervening; he acted after 2-44 of the sixth, when the Mexican’s bravery meant he remained on his feet, despite Davis freely landing to both head and body.

Muhammad Ali’s grandson, Nico Ali Walsh, required only two minutes and 50 seconds to record the evening’s most explosive stoppage, when after some unremarkable exchanges a powerful left-right combination dropped Denver’s Alejandro Ibarra so heavily that referee Russell Mora instantly waved their middleweight fight over. The 21-year-old Ali Walsh, from Chicago, had been trained by none other than the great artist Richard T. Slone.

There was a second-round victory for Troy Isley, the middleweight from Washington, over Augusta’s Anthony Hannah. He had already dropped Hannah with a body punch earlier in the second when another aggressive assault forced another knockdown. When Hannah considered returning to his feet, his corner read the mind of Hoyle and intervened to rescue him at 2-33.

New Orleans’ Jeremy Hill required oxygen after suffering a third-round knockout by Raymond Muratalla of Fontana, California. After a right hand to the chin in the first round, referee Tony Weeks ruled a knockdown as Hill’s knees buckled sufficiently for his backside to essentially touch the canvas before he regained his balance; another strong right hand forced the knockdown in the third, and though Hill sought to fight on, Weeks rescued him after 2-27, whereupon he received treatment.

Weeks also intervened after 2-32 of the opening round at super-lightweight, where Bedford, Ohio’s exciting Abdullah Mason beat Luciano Ramos of Buenos Aires. At lightweight and under the observation of referee Celestino Ruiz, Andres Cortes of Vegas won via knockout after 43 seconds of the sixth round against Mexican Alexis del Bosque, who trains in Dallas.

BN considered Chicago welterweight Antoine Cobb fortunate to emerge from his four-round fight against Jaylan Phillips of Atlanta with a majority draw. Bayless was the referee; judges Cheatham and Lisa Giampa both recorded scores of 38-38; Richard Ocasio scored 39-37 in favour of Phillips.