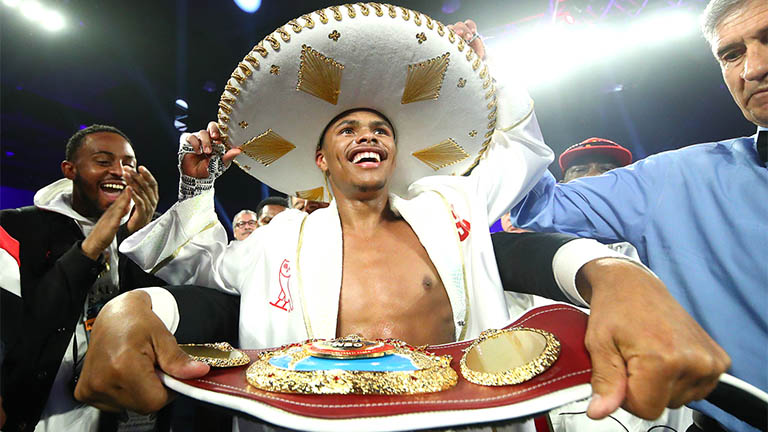 IT had all the elements of a Shakespearean tragedy — love, rancour, betrayal — brewing noxiously in the background, but in the end, the highly hyped featherweight title fight between Shakur Stevenson and Joet Gonzalez at the Reno-Sparks Convention Center was nothing more than a lopsided, cardboard rout.

Stevenson, the ace southpaw from Newark — and reputed boyfriend of Gonzalez’s sister — was responsible for sapping the drama out of the ring, bringing to bear instead the cold, antiseptic sheen of his superior boxing technique.

Working behind nothing more complicated than a hair-trigger right jab and stiff straight left to the body, Stevenson bedevilled Gonzalez, reducing the undefeated Mexican-American to a puppet en route to a unanimous 12-round decision victory and earning the WBO featherweight title vacated by former champion Oscar Valdez.

Stevenson, 22, never let the bad blood get to his head in what is otherwise a sad familial situation: Gonzalez, along with his brothers and father/trainer, has been estranged from his sister Jajaira because of her relationship with Stevenson. None of that concerned the Newark native, though.

“All that was business,” Stevenson said after the fight. “Like, it was personal to [Joet], but it was business to me.”

Judges Eric Cheek, Glenn Feldman and Dave Moretti all tabulated a 119-109 scorecard, giving Gonzalez only one round.

The speed differential between the two was evident from the start, with Gonzalez, from Glendora, California, employing more wasted feints and jittery movement than consequential punches.

Gonzalez had no idea how to wade inside like a tactical pressure fighter. As a result, Stevenson, a gifted neutraliser, toyed with his prey, keeping Gonzalez at bay with the jab, and when the opportunity presented itself, ramming home an array of solid combinations that froze Gonzalez in his tracks. The dog fight that Gonzalez promised never materialised.

Post-fight, Stevenson called out Leeds’ Josh Warrington for a unification match. ”Josh Warrington!” he said. “You are a champion, now I am a champion. Let’s do this! I want to unify titles.”

On the undercard of this Top Rank show, super-featherweight Mikaela Mayer battered and stopped Alejandra Soledad Zamora, who quit on her stool after the sixth round.

In the first round, Mayer, a 2016 U.S. Olympian from Los Angeles, came out firing, landing a right hand that deposited Zamora on the mat. While Argentina’ Zamora would recover, her night wouldn’t get any easier. Mayer chipped away patiently at Zamora, before ramping up the pace in the sixth round. During the break, Zamora’s corner gestured to referee Russell Mora to stop the fight.

Joshua Greer Jr. continues to get the benefit of the doubt. The Chicagoan bantamweight notched a highly suspect 10-round points win over Cleveland’s Antonio Nieves, even overcoming a knockdown in the 10th round.

When it was announced that judges Max DeLuca and Lisa Giampa had scored the fight 95-94, and Cheek 96-93, all for Greer, the crowd broke out in a chorus of boos. It was a deja vu all over again for Greer, who was coming off a hotly disputed points win against Russian Nikolai Potapov in the summer.

Nieves appeared to outwork Greer early on in the fight. In the fourth round, he landed a left hook that stunned Greer, sending him into the ropes. But Greer would rally in the second half, landing the cleaner blows, especially to the body.

In the eighth round, Greer struck Nieves with a low blow, forcing referee Robert Byrd to stop the action in order give Nieves some time to recover. Nieves would mount a powerful 10th round, scoring a knockdown courtesy of a right hand that landed on the top of Nieves’ head. It wasn’t enough.

Xander Zayas — remember that name. The 17-year-old Puerto Rican welterweight made his professional debut a successful one, scoring two quick knockdowns en route to a first-round stoppage of Genesis Wynn at 1-24.

Zayas, the youngest fighter signed to a promotional contract in Top Rank’s history, scored the first knockdown with a left jab to the body-straight right to the head combination. He followed it up with a hard right to the chin and body that sent Wynn crashing to the canvas once more, as referee Nady came over to wave off the bout.

The Verdict Stevenson leaves no doubt that he is a special talent.