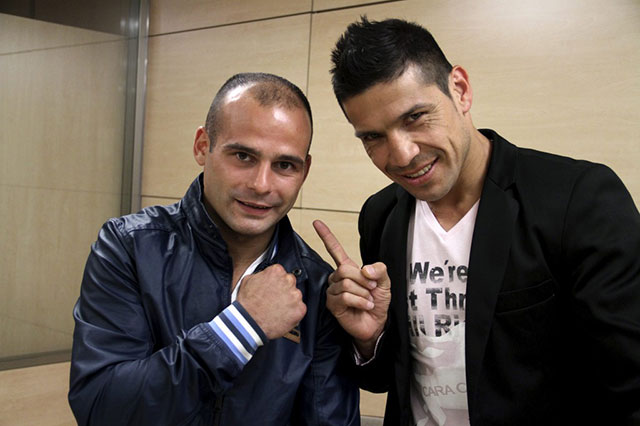 Sergio Martinez is in Belfast and expecting his namesake to keep his title and upset Frampton, writes Steve Wellings

FORMER world middleweight champion Sergio Martinez is confidently backing his namesake Kiko Martinez to retain the IBF super-bantamweight title on Saturday night. Speaking in Belfast ahead of Kiko’s defence against local favourite Carl Frampton at the Titanic Quarter, Sergio reckons his charge can end the fight inside the distance.

“I think that Kiko will put on a great show, keep the title and win by knockout,” said the head of Maravilla Box.

“I’ve fought in Belfast before and it is always a great atmosphere here. Both Kiko and Frampton are very experienced boxers and I don’t believe they will be disturbed by that pressure.”

Sergio boxed at Belfast’s King’s Hall in 2004 beating Richard Williams in a defence of the IBO light-middleweight title that he had taken from Williams two fights earlier. The 39-year-old now resides in Spain and says that “La Sensacion” was beset by personal issues in the lead-up to his ninth-round stoppage loss to “The Jackal” in February 2013.

“It was great work by Frampton last time but Kiko is just not the same boxer these days. Kiko is high on confidence after just knocking out three world champions. That brings him more drive to throw lots of punches. We are friends and big fans of each other and we do business together so it’s a complete relationship that works well.”

Martinez now believes that Kiko will be more accustomed to life under new trainer Gabriel Sarmiento and prove that the form displayed against the likes of Romero, Mathebula and Hasegawa is the result of an athlete reinvigorated.

Sergio later reinforced the point that even though he respects the talents of 122 lb rivals Guillermo Rigondeaux and Leo Santa Cruz he is only focusing on the threat of Belfast’s Frampton in the short term.

“I respect them a lot and they are great fighters but for now in my mind it is about Carl Frampton and once that stage is done then we can think about somebody else,” concluded Martinez.