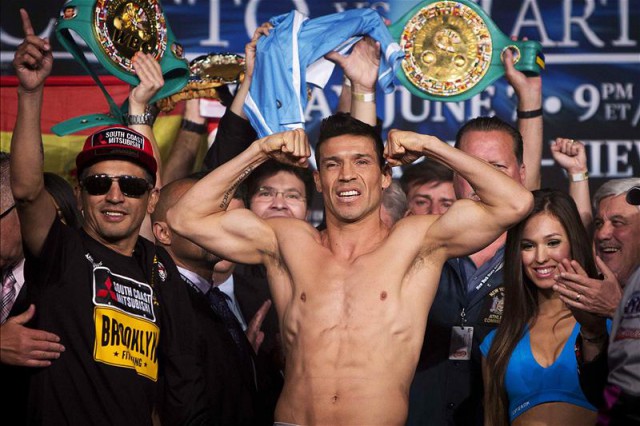 Julio Cesar Chavez Jnr wasn’t the best opponent Sergio Martinez ever fought but it was a key victory for the Argentine, catapulting him to a new level of stardom and hugely satisfying personally. The WBC had made Sergio a ‘Diamond’ champion and he reclaimed the proper WBC middleweight title against Chavez in Las Vegas.

The fight that would eventually bring Martinez’s glittering career to an end, after more surgery on his knees it was clear that he was no longer the force of old, no longer able to quickly dart out of trouble when needed, he was knocked to the floor four times by Cotto.

Martinez really made a name for himself in this fight, trading shot for shot with Williams in his trademark athletic style in what was one of the fights of the year in 2009, losing a debatable majority decision but enhancing his reputation.

Martinez stripped the WBO and WBC belts off Pavlik in Atlantic City, where Martinez dethroned the champion with a unanimous decision, leaving a trail of destruction on Pavlik’s face causing multiple cuts around both eyes which bleed profusely throughout the fight, leaving him looking very much the defeated champion.

After their thrilling contest back in 2009, the two faced each other again giving Martinez a chance to revenge his narrow loss the previous year and he did so in spectacular fashion. Williams walked on to a sensational left hook from Martinez leaving him completely knocked out and motionless. Promoter Lou DiBella added “That it was one of the great knockout punches of another great fighter I’ve ever seen.”

Having not boxed in his native Argentina in over ten years, Martinez fought Murray in the Amalfitani Jose football stadium, Buenos Aires. Returning from a knee injury Martinez just saw off the challenge of Murray in who dropped him before losing a narrow decision, much to the delight of the 50,000 fans in attendance.