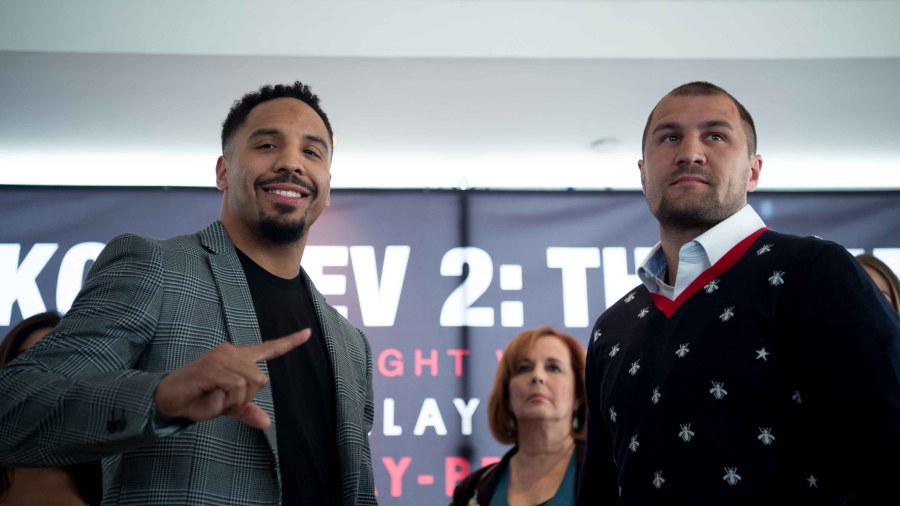 'I hope is a week or two before the fight, Andre Ward does not get injured and has enough balls to fight me,' says Sergey Kovalev

SERGEY KOVALEV is relieved that he is getting his rematch with Andre Ward, after disputing the decision in their first fight. But he feared that Ward could still back out.

“I am thankful the fight will take place on June 17. Well, will take place on paper for now. I’m appreciative of my team and Team Ward that this fight will actually happen. I want to apologize to my fans for my performance the last time but we’re going to get this squared either way. We’re going to see who is the best fighter. I’m very excited for June 17,” Kovalev said. “The only thing I hope is that a week or two before the fight, Andre Ward does not get injured and he has enough balls to come out and fight me on June 17.”

Ward dismissed the criticisms. “Unfortunately, there’s perception and there’s reality. Perception is every one thing that’s written, every opinion but as you grow and learn this business, it’s not about perception. Nobody can point to a fight where I turned. Not one point. That’s not in my track record. So, I don’t mind the perception. I don’t care about Instagram. This is chess, not checkers. You can make all the rules you want to make, but it’s about the checkmate. That’s when the game is over,” the American said. “They have to understand, there’s nothing scary about this man. You realize we just fought 12 rounds four months ago? Everyone wants to highlight the knockdown, that’s probably one of the most beautiful moments of my career. And did you guys see the other 10 rounds? Nobody’s talking about that. But that’s what makes us who we are. It’s hard concrete down there, we don’t want to fall. We’ve got another drive, we’ve got another gear we’ve got to tap into when we hit adversity and hit the cannons. You guys saw that, in the biggest moment of my career.

“I didn’t get to where I’m at because there’s something unique about me. I didn’t get to this point by happenstance. Some may not like it, but you got to respect it. You don’t have to, but we’ve earned the position that we have. We don’t mind being understated. The fight is academic. When my team green-lighted it, I said go ahead and announce it. The reality is, you’ve got to see me on June 17. That’s the reality of the situation. I love to talk, it’s all good. We knocked heads for 12 rounds, that’s the reality of the situation. He felt me, he knows. On June 17, that’s how we’re going to do. We’re going to get started a little early. Whether you’re with me, or whether you’re against me, tune in. Appreciate everybody’s time. Don’t miss this fight, June 17. You got what you asked for.”