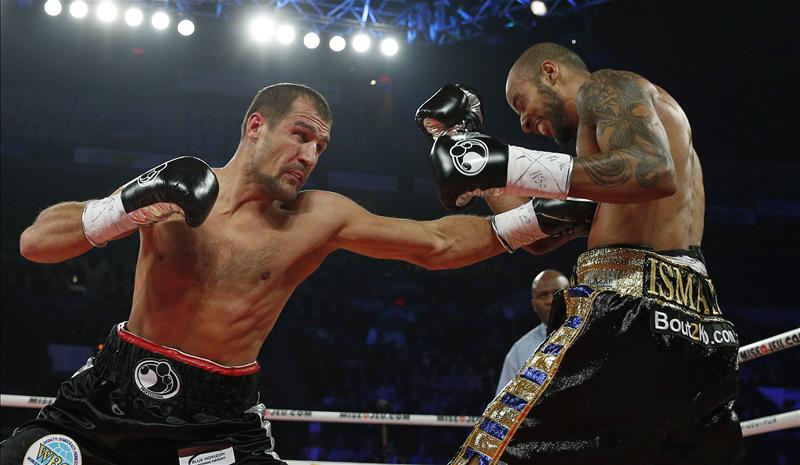 AS well as abruptly departing the final press conference, Sergey Kovalev also declined to join a scheduled briefing with reporters on Thursday.

His manager Egis Klimas explained the sources of his frustration. “He doesn’t feel like Ward is doing enough to promote. He has a sugar daddy who pays him seven million dollars for this fight. Sergey is earning every single penny. He is promoting this fight as much as he can. Every single penny comes from the fans, from the ticket sales, from the pay-per-view Sergey is earning, nobody is giving to him and for Ward doing things like not showing up to the [HBO] Face Off, which is a very important thing to promote the fight and he’s not come. Yesterday I took him on a satellite tour we said it would take 30 minutes, max 40 minutes, we spent an hour and 20 minutes with an ear plug in his ear, people asking him questions he is stressed out. It’s not in his native language,” Klimas said. “He came to fight here, not to talk.”

Kovalev’s promoter added, “He’s mean as a snake at this point and we’re not going to ask him to do any more.”

She contrasted Ward and Kovalev, describing the clash as an athlete versus a fighter. “There’s a story Sergey tells about when he fought in the street one time,” Duva related. “He talks about how when his car got stuck in snow, he walked into a little convenience store and two guys came up and tried to mug him. He told them, ‘Walk away, what am I, an ATM?’ And then they attacked, he got one of the guys, they came back with 10 friends, then Sergey proceeded to have this moment where he decided what to do. He said, ‘I could have run because I’m an athlete I can run, or I could fight? I thought to myself if I run then I had to live with the fact that I did this for the rest of my life.’ Which I think is an amazing statement about his character. ‘Or if I stay I might get hurt and I’m scared. I said okay let’s go.’ And he talks about how he knocks out four guys, ‘I turned around I remember I had a hammer in my car, I turned around I tell them I’m going to f***ing kill you, so I turn around, I got the hammer, I turn around and I’m about to do something’ and he says, ‘And I look at their backs and they’re all running away from me.’ And he said, ‘Then I looked down at these guys sleeping in the snow and I pick up the hammer and then I stop said this is a bad decision.’

“He was 18 and I’m telling you this story because I’m willing to bet nothing like this happened to Andre Ward. Sergey’s life, his fighting started in the street. He did fight in the gym, he’s not an Olympic gold medal winner. He’s not this guy who had his path paved with gold medals and premium TV deals. He started fighting in the street. It does come from anger.

“I think where you have Ward who’s an athlete, who thinks like an athlete and always in this very protected programme.”