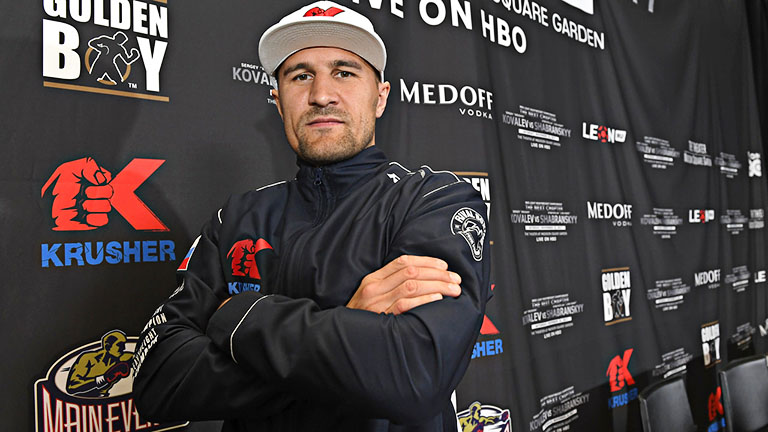 IT’S already been compared to Rocky IV but the much discussed fight between Anthony Yarde and Sergey Kovalev isn’t completely signed off just yet.

“Bob Arum gave an interview a few days ago and he says Yarde vs Kovalev is done,” continued Ajayi. “Me personally? I’m not saying it yet but we’re excited.

“This time round I don’t want to put a jinx on it. The first time the fight was mentioned I was very vocal. Uncharacteristically I started speaking about another fighter and I’ve never done that. I don’t usually put the opponents face on any of my social media.

Yarde himself has made well-documented claims that the Russian’s team ‘fear’ the clash. Similarly, Ajayi believes his man will stop the WBO light-heavyweight world champion.

Kovalev 33-3 (28) looks to have the advantage of home soil, if the fight is finalised. They’re not worried about fighting on foreign soil though, says trainer, Ajayi: “I was in the corner of Dereck Chisora and Vitali Klitschko, I was in the corner when Dereck fought for the European title. I’ve been in big events. I’ve always known Anthony was going to be where is now, so I’ve prepared him for this. In his eighth fight he fought on the undercard of Canelo Alvarez versus Liam Smith, in one of the biggest stadiums in the world.

“Some sports arena in Russia isn’t going to be bigger than the AT&T Stadium in Dallas Texas. I knew what I was doing when Frank got us on the bill. It was all part of the journey.”

“Krusher” Kovalev’s last outing was a unanimous decision win over Colombia’s Eleider Alvarez, who had stopped Kovalev just six months earlier. Yarde and Ajayi were ringside for the defeat.

“Everything is timing,” said Ajayi, firing off his well-worn motto. “Frank Warren asked me about this fight in 2017 when we won the WBO European and I said no way it’s too early.

“Then last year Frank said, ‘Listen son, I’m telling you he’s ready.’ Having all the respect I do for Frank, I still needed to see. We went all the way to Atlantic City for Kovalev vs Alvarez. I was going on my own but Anthony said he wanted to come with me. He got stopped and Frank said, ‘I told you so.’ But I said, ‘Don’t worry Frank, the opportunity will come again.’”

Yarde and Ajayi have many critics, some argue this opportunity has come too soon. To those who say Yarde’s rise has been more meteoric than meritocratic, his coach has a message. Ajayi hails his charge’s patience and claims Yarde’s best asset, natural power aside, is his ability to soak up information and learn.

“He’s a strong minded individual,” said Ajayi. “The great thing about Anthony is that he listens. He’s not as vocal as me. He takes information on better than I’ve ever seen.”

Yarde will have to have been a fast learner too, to go from a 12-bout amateur career to beating Sergey Kovalev on foreign soil. There are questions about the Russian’s growing fragilities though and Ajayi argues that his man can capitalise on any weakness. “Anthony Yarde is born to punch,” he says. “He just knows how to knock you out.

“We’re not talking about a washed up fighter here. Kovalev was beating Alvarez handily and then lost concentration and got stopped. Let’s get that right. In the re-match he boxed his ears off! I want the full credit when we stop him. Kovalev is getting knocked out.

“Go watch the first ever interview I did on BT Sport. I said, ‘I can’t wait for the whole of the UK, the whole world, to see this kid, because he’s going to be something.’”