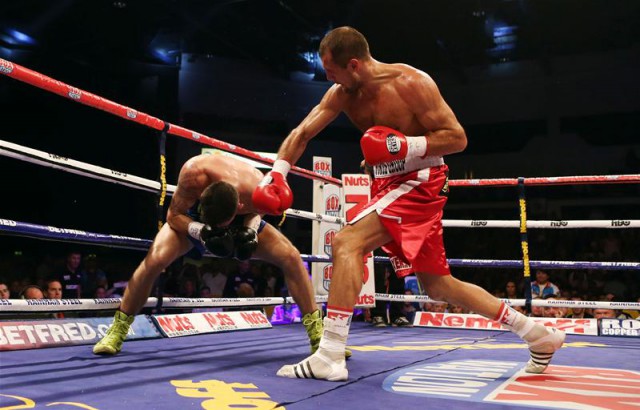 Sergey Kovalev breaks down his clash with Andre Ward

SERGEY KOVALEV, rather than focusing on a more awkward than anticipated win over Isaac Chilemba, believes his victory over Bernard Hopkins will stand him in good stead to defeat Andre Ward in their November 19 showdown.

“I got some experience from my fight against Bernard Hopkins. He showed that never give up. That you should to fight all 12 rounds and hope for your win,” Kovalev said. “I think my last fight against Chilemba, it was like a similar fight you know, because Chilemba’s [style is] a little bit like Andre Ward. But Andre Ward is Andre Ward, a little bit different and stronger, smarter, undefeated and more motivated than Chilemba. I’m interested what he will bring November 19 to the ring.”

Kovalev is also going to be watching out for Ward’s head. “Yes I think he will use it and I am ready for this too. It will be wrestling and not fight,” he laughed.

But the WBA, WBO and IBF light-heavyweight champion continued, “John [David Jackson, his trainer] just gives me freedom to do what I want, what I would like to do. You know, just like adjust some things and advice between rounds about technique. Working a lot with mitts. I like working with him and feel comfortable.

“I don’t think that Andre Ward [will] let me use a lot of body shots because he has great legs and a lot of movements. You know he’s very smart. And I think first part of this fight is going to be a lot mentally, but I should prove that I’m Krusher and that I’m going to do my job. He’s going to do his job, me to do my job.

“I don’t have anything personal about him. I should win this fight, I only have to prove [to] myself who I am. I am fighting for me first of all, and after this really for boxing fans. This is my boxing career since 11 years old and right now Andre Ward [is] in my way. And he wants to get my titles but I’m still alive.”