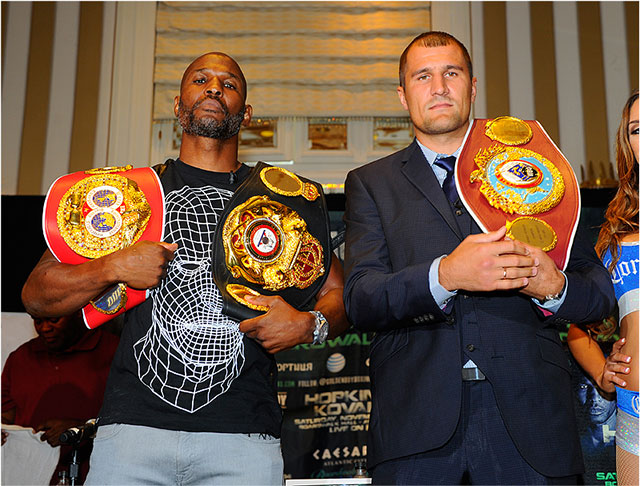 Check out what the fighters and promoters had to say below:

“When fighters want to fight, this is what happens. When we really want to do it and our promoters do as well, we get it done.

“I take everything I do extremely seriously. But people ask me, how can I continue to do this? I have no plan or timetable when I put my mind to something.

“I bloomed late. I didn’t bloom by the timing of the experts. I want to make it as difficult as possible for you to come up with a headline for me. I don’t want to be on the pound-for-pound list because that would make me human.

“What I’m doing now is making a new legacy and a new list and a new way to judge. ‘Where do we put this man? We can’t put him in the top 10. He’s doing things no one has done!’

“Enjoy this while you can and come see it. Don’t worry about when or how I’m going to leave or break down. You guys are all humans, I understand you, but you don’t understand me.

“The last time I heard, he [Kovalev] can box. He’s shown that he can box…People are traumatized by the punch and the knockout.

“I’ve been in the game for almost three decades. I look for more of what a guy brings to a gunfight other than bullets…The sweet science is not based on only one thing you can do particularly well.

“If he comes in the game thinking a punch is all he’ll need, he might be right, so you should watch.

“I’m walking a tightrope hundreds of feet in the air. He crushes people. Only three or four people survive his hammer.

“Come November 8 on HBO you get to watch artwork. You’re watching Miles Davis and Louis Armstrong with gloves on.

“It’s such a testimony to see a 50-year-old man – less than 100 days from now – go 30 plus minutes with a young strong Russian puncher and not get a scratch on him.

“I understand humans have a timeline of when they are supposed to go. Age 35 and you’re done – I don’t care what sport you’re in. It’s a fact. I don’t know what type of evidence I need to show I’m an alien other than what is there.”

“It is not easy to overlook Hopkins. I think when he’s 60 years old he’ll be in the same condition. He’s an alien, but I have to send him to the moon and maybe from there he’ll go by himself to Mars.

“I want to say that one day in Big Bear when I trained, I met Oscar De La Hoya and asked him to sign me and he turned me down, but now here we are on different sides.

“I am not a talker, I am a fighter and I am sure Bernard will promote the fight for both of us.

“I don’t really understand what Bernard is saying. It doesn’t matter what he says. Even if I understood, I wouldn’t care. I don’t worry about him. I’ll go into the ring and do my job.

“I can’t say what the fight will be like. This is boxing and anything can happen.

“It is my secret what I will do on fight night. I will give it my all and come out with the win.”

“This fight is the best against the best in the light heavyweight division.

“I really do feel that this is not just a fight, but an event. I am glad that it’s on HBO and I’m glad its not on pay-per-view, which it easily could have been, but you have to give credit to the fighters who are doing it for the fans.

“I believe that many people over the years have doubted Bernard Hopkins. He’s over 40-years-old, how can he win? All of those questions are no longer being asked. Everything that he does, he deserves.

“At 49-years-old, being the oldest champion in any sport, he deserves tons of respect. The fact that he’s facing the ‘Krusher,’ is just another of the many dangerous fighters that Bernard has faced.

“Being the best middleweight in the history of this sport, with 20 defenses and now to be 49 at light heavyweight, he’s still going strong. I’m now convinced he is an Alien.”

“This fight is going to be the most anticipated fight of 2014. It’s so much fun putting together a fight like this that everyone wants to see. Its great to see the excitement level and the anticipation, you can feel it in the air.

“This is going to be a tremendous event. It’s one of those fights that when the bell rings you really won’t know what is going to happen. It’s not about finding out who’s best, its about who is going to win the fight, because both are great.

“This is what boxing is supposed to be and we look forward to November 8.

“The first person I thought of when I saw Sergey Kovalev in the ring was Ray Leonard. I saw the look in his eye and I could tell he was different. I believe he is the most electrifying boxer in the world of boxing and he will prove it on November 8.”

“This is an Atlantic City fight, it’s in Bernard’s backyard and this is where the fight belongs.

“Sergey has also developed a great following from his last two fights in Atlantic City.

“Caesar’s stepped up to the plate and continued its tradition of great championship boxing in Atlantic City. We believe in the future of Atlantic City and we believe in boxing. We expect a sellout on November 8.”

“November 8 is going to be a nice fight with premier fighters and premier promoters. We want to keep on the legacy that we have created in New Jersey.”