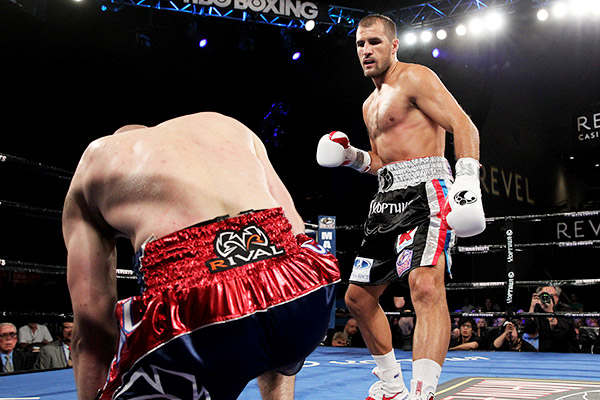 PROUD new dad  Sergey Kovalev isn’t in the mood for any niceties after vowing to ‘kick ass’ when he faces  Bernard Hopkins this weekend.

The pair clash in what is one of the most eagerly anticipated fights of the year, with both men putting their world titles on the line when they lock horns in an historic battle at the Boardwalk Hall in Atlantic City this Saturday night, live on BoxNation.

Despite having become a father for the first time, the feared Russian knockout artist has not softened from his characteristic steely disposition and has stated he is prepared to win the fight with Philadelphian Hopkins in any way possible.

“This is a huge fight for me and this is the fight of my life. It’s a very important fight. I’m focused on this. Yes, my baby was just born and I remember this, and my son has pushed me more and is a big motivation for me. Now I understand who I’m doing everything in my career for. I’m doing it now not for me. I’m doing this for my family,” said Kovalev.

“I go into the ring and I get my victory at any cost. If I need to fight, I will fight. If I need to box, I’m going to box. This is a fight. You can keep in your mind one strategy but these fighters can change.

“I don’t have any strategy for the fight, just to go into the ring and fight like a street fight. I’m going to kick his ass because he’s my opponent. Any of my opponents want to beat me. If I’m not going to beat him he will beat me,” he said.

The reigning WBO light-heavyweight champion has made it clear that he is even prepared to push the boundaries if need be.

The journey to this point in his career has been a long and arduous one for the big-hitting Kovalev, who has scored 23 knockouts in his 25 wins.

Having moved over to the USA to fulfil a childhood ambition of establishing himself among the elite of the sport, the 31-year-old Kovalev’s road to stardom wasn’t easy.

“You never know what will be tomorrow, but if you believe in it, it can happen, if you trust and believe in yourself and you have a goal and you’re working to this goal, then yes, this can happen,” said Kovalev, speaking on his rise to the top.

“When we fought three, four years ago with Egis [Kovalev’s manager], and we were travelling all over the country in America and fighting anyone who was ready, I didn’t think that this fight would be possible.

“But I believed that I can to do it, and I tried to do it, and some very big thanks to my promoter, Kathy Duva and to Egis that they, from their conversations led me to sign a contract with the promoter – that is when my fight began.

One secret weapon that Kovalev has in his armoury going into this fight is trainer John David Jackson, who was in camp with Hopkins for four years under the tutelage of the WBA and IBF champion’s trainer Naazim Richardson.

Kovalev, however, is keeping his cards close to his chest ahead of the bout.

“The most important thing for the team and for me is just to keep going systematically, and keep disciplined, and keep working. What John David Jackson said is that it’s a secret between me and him, he has the keys to my victory.

“I understand that everybody wants to hear what happened in my training camp with John David Jackson, but everything you will see on November 8th in Atlantic City,” Kovalev said.