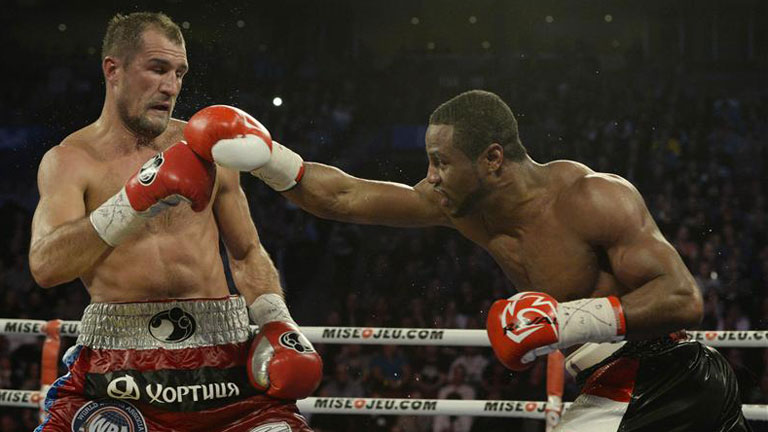 SERGEY KOVALEV is full of respect for his November 19 opponent, Andre Ward. Speaking inside a small conference room at the Gaylord Resort in Texas, the Russian light-heavyweight – one of the most fearsome fighters in boxing today – admitted to both nerves and excitement going into the biggest fight of his life, and the most appealing showdown the sport has produced this year.

“I don’t think this fight will be easy,” said the affable Kovalev. “It’s hardest test of my career. I have never fought a boxer at the level of Andre Ward. He’s never lost. If I win I will break his zero, and that is my motivation.”

Like Kovalev, former super-middleweight king Ward is regarded among the best active fighters today. As Kovalev’s promoter Kathy Duva pointed out, such a collision has been all too rare in the current era. Refreshingly, this bout was made almost as soon as the fans started to call for it. Slick and intelligent, Ward has only been on the Russian’s radar since announcing his intention to move up to light-heavyweight one year ago.

“I hadn’t really seen him fight before,” Kovalev said of his rival. “I saw a couple of rounds of his fights against Carl Froch and Mikkel Kessler. I never thought that one day I would face him. I had enough attention in my division, I didn’t need him. But now he’s at light-heavyweight I need to fight him. I must be ready for anything. This is the hugest test of my boxing career.”

Kovalev – who spoke of his 2014 thrashing of Bernard Hopkins as a huge confidence booster – has already began training in California with John David Jackson. “A couple of guys” have been employed as sparring partners – fighters, Kovalev says, who are similar to Ward in style. They remained nameless, though.

What is clear is Kovalev’s pride at competing in such a battle, to be broadcast in the US by HBO PPV.

“It means a lot to me [to be fighting on PPV],” he explained. “Everything this new, this is all new. I’m excited, and I’m a little bit nervous. It’s a test for me to get to the next level in my career. I’m really, really happy. I never thought I could get to this level when I started as a professional.

“I will try on November 19 to fight how I want, how I decide. I am ready for a long fight, a short fight, whatever. He is good on the inside and outside, he is a universal fighter. We will not be trying anything new – there’s no time. I will be ready for 12 rounds, it looks like it will go 12 rounds, 99 per cent. But we don’t know.”

To prepare for Ward’s elusive, difficult style, Kovalev endured 12 rounds against the slippery Isaac Chilemba. It was a tougher than expected victory for the 175lb leader, and one that has convinced many observers that Ward will be too slick for Sergey. In contrast, though, Ward took on the outclassed Alexander Brand – a fighter with no resemblance whatsoever to Kovalev.

“Alexander Brand is a different level to Andre Ward,” Kovalev observed. “Ward looked very good. Chilemba was much better than Brand. Chilemba was a similar style to Ward, and maybe at times I looked no good, but I showed what I could. I knew I must get victory over Chilemba to get the fight over Andre Ward. I did it, and now I prepare for Ward. Against me he [Ward] will be much better than he was against Alexander Brand.

“This victory will put me on another level in Russia and worldwide,” Kovalev continued. “But my goal is not fame. My goal is to win, I don’t like losing, I will not be a loser.”

Rumours have swirled in recent months, with some substance, that Kovalev was dropped in sparring by his friend Gennady Golovkin several years ago. Sergey addressed the claims with a smile.

“Did you see it for yourself? Don’t believe it then,” he said before explaining, “In sparring, sparring happens. We are not swimmers, we are boxers. Anything can happen.”

As Golovkin’s name threatened to overshadow proceedings, Duva stepped in.

“Sergey used to spar with Gennady all the time. At the time, Sergey was an eight-round fighter, and Gennady was a world champion.

“Let’s just leave it at that.”