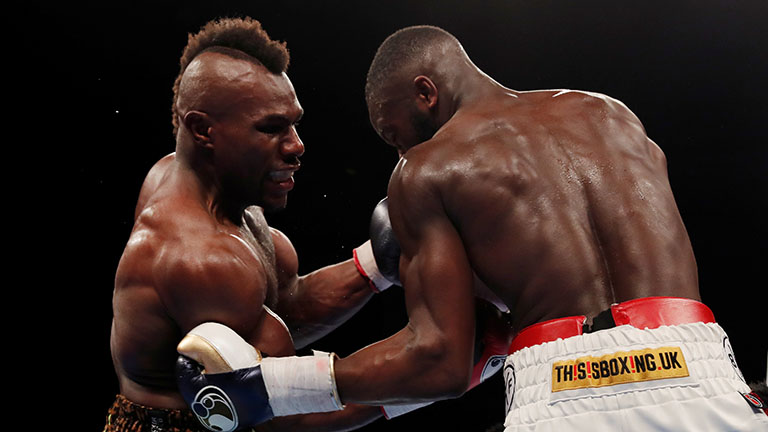 WATERFORD’S Rohan Date made a winning London debut, despatching southpaw Jan Balog of the Czech Republic in the second of a scheduled eight-rounder at York Hall.

A well-timed right counter to the chin dropped Balog by the ropes – he struggled to get up, but was counted out by referee Chas Coakley after 55 seconds of the round. And Balog stumbled as he walked back to his corner. It had been scheduled for eight.

Date won the first round – he was more on target, and got in some fair body shots. But the one-punch ending came as a surprise. It was Date’s ninth win (seventh inside) against one draw.

Without a win in his last 11, Sheffield’s Serge Ambomo shocked Balham’s unbeaten Ramon Perez, flooring him twice and stopping him in the third of a scheduled four.

Ambomo pressed forward but Perez moved and countered well, switching briefly to southpaw in the second. But in the third Ambomo started connecting with rights to the head, and three successive shots put Perez down (Ambomo landing one when he was on the floor). Perez was up at “five,” but another burst put him down in his rival’s corner – and Ambomo’s follow-up attack convinced referee Kieran McCann to call a halt after one minute 46 seconds.

Bulgarian Ivanka Ivanova caused a surprise by clearly outscoring Ilford’s Ruqsana Begum over four-twos, referee McCann scoring 39-37. They had drawn over the same distance here in March last year – since when Ivanova had had nine contests, Begum none.

Ivanova didn’t have the best start – initially she came into the ring without her protector, and when the bout began she was getting caught as she came forward. But she made a big effort towards the end of the first, scoring with rights – and at the start of the second Begum had a badly-swollen right eye, and was allowed to continue only after a careful inspection by the doctor.

Ivanova kept ploughing forward, landing with both hands, and a right to the head had Begum holding in the last. At the bell, Begum threw up her arms – but there was only one winner.

Southpaw Eric Donovan (Athy) made it 10 straight wins with a third-round stoppage of Barcelona-based Moises Mojica. It was scheduled for six.

Nicaragua-born Mojica tried to get close but was floored by a right in the second. By the third Mojica’s left eye was nearly closed, and there was a bump below the right – and a burst from Donovan had him down on his hands and knees for seven. Referee Mark Bates completed the compulsory count, and told Mojica to walk towards him – not happy with what he saw, he signalled the end at 2-42.

Germaine Brown (Kingston) scored his sixth straight win (the first inside-schedule), knocking out York’s Harry Matthews in the second of a scheduled six.

Brown was on target in the first, landing stiff jabs and picking his shots effectively. In the second Matthews was shaken by a right to the head, finally going down on one knee in a neutral corner. Another right had Matthews holding – he tried to counter but was caught by a big right that sent him down on his knees in the opposite neutral corner. Referee Coakley completed the count after 2-25.

Kingsley “Obi” Egbunike halted Kristaps Zulgis, a Latvian based in Peterborough, in the fourth of a scheduled six.

Egbunike scored well with jabs in the early stages, and Zulgis took some stick on the ropes in the third. In the fourth three successive lefts, followed by a left-right to the chin, had Zulgis down. On resuming Zulgis moved, and tried to cover up, but a right to the body put him down by the ropes for eight. Then a burst to the head, and finishing right to the body, dropped him again, and referee McCann waved it off at 1-24.

In other sixes on this Hellraiser promotion there were 60-54 wins for Alex Ananivi (Edgware via Ghana) over Braintree’s Dylan Draper and Rylan Charlton (Norwich) over Barcelona-based Nicaraguan Lesther Castillano (both Coakley).

The Verdict Prospects move on, but a couple of surprises.