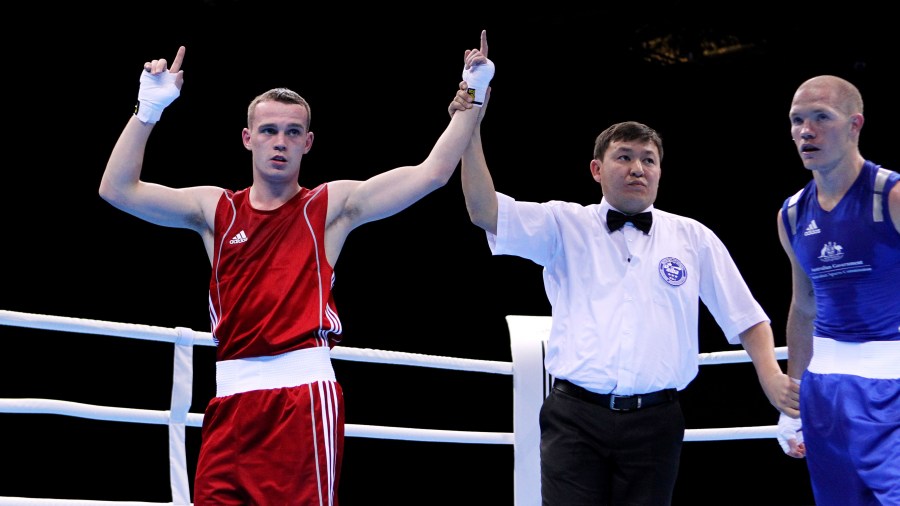 FORMER GB amateur star Sean McGoldrick is aiming to make an instant impact when he makes his professional debut on the undercard of Anthony Crolla’s lightweight world title rematch against champion Jorge Linares in Manchester.

The Welshman recently joined up with Eddie Hearn’s Matchroom promotional stable after an impressive amateur career, and he will make his bow in the paid ranks on March 25 at the Manchester Arena.

McGoldrick rallied to a gold medal at the 2010 Commonwealth Games and earned bronze in the same tournament four years later, but making the pro switch was in the works for some time as he desired a fresh challenge.

“So I turned professional just before Christmas with MTK. As my management they sorted me a deal with Matchroom, so it has been in the pipeline for a few months.” McGoldrick told Boxing News.

“I’ve always wanted to turn pro, it’s just finding that right time and being confident that it’s the right decision. As soon as I missed out on the last qualification event to go to the Olympics I left the GB squad and knew it was time to turn over.”

The 24-year-old becomes the latest amateur talent from Britain and Ireland to be snapped up by Hearn at Matchroom, following in the recent footsteps of the likes of Katie Taylor, Josh Kelly, Joe Cordina, Lawrence Okolie and Nicola Adams.

Irish boxing queen Taylor is being groomed for success at the highest level in the women’s game and will also feature again on the Crolla versus Linares card too, on a night McGoldrick is seeking to start his new career chapter off in style.

“Every boxer dreams to start the career with such a huge stable so I feel lucky to be a part of it and I plan on making my own name amongst all the great names they already have in the team,” continued the Welshman.

“Yes to see my former GB teammates in the pros and what Matchroom has done with them it was easy for me to choose this path.”

Having gained plenty of admirable achievements as an amateur already, McGoldrick is hoping that successful background can be a strong platform on which to build upon as a professional.

“I hope my amateur background will help, amateurs isn’t so different from the pro game now especially with WSB etc, so I think it will help,” he said.

“I’ll always work hard to make any adjustments that need to be made, so any changes that I’ll need to adapt to I’ll work hard to do that.”

The Tony Borg trained fighter will kick things off at bantamweight, a division in which he claimed his Commonwealth medals in 2010 and 2014, on what is set to be another big night on Manchester soil.

“I know it’s an amazing opportunity – one of the biggest shows this year and I’m making my debut, it’s incredible.

“I’m so excited and I really want to put on a special performance to add my bit to the card for the people watching.

“I’ve got a few bus loads of people coming up to support me so I want to make it a great night for them to remember as well as me.”

Despite a great spell for British and Irish boxing of late, McGoldrick isn’t looking towards any particular fighters to emulate but is keen to learn from those already at the top of the sport. “I don’t want to emulate a style, just work on my strong points and try and be the best I can be,” he added. “Obviously if I see a boxer doing something I like and I can do it then I’ll work on that. I find all boxers inspiring and could probably name hundreds that inspire me. I watch boxing all the time for inspiration and to learn.”

Matchroom boss Hearn has been busy acquiring the best young prospects from around Britain and Ireland in the last few months, and Newport-born talent McGoldrick is one such fighter that will aim to make an immediate impact on March 25.