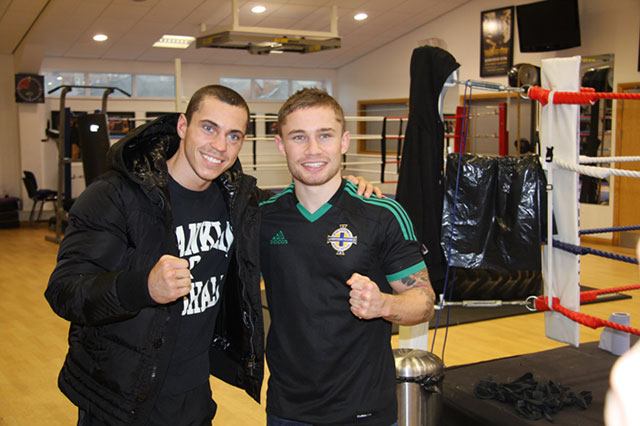 Quigg hopes to tempt Frampton to Manchester for super-bantamweight showdown

SCOTT QUIGG has fired a warning to Carl Frampton: “after I beat Stephane Jamoye, I’m taking your world title.”

Quigg defends his WBA ‘world’ super-bantamweight title against the Belgian live on Sky Sports from the Phones 4u Arena in Manchester, and the Bury star is targeting a unification clash with the newly-crowned IBF champion from Belfast after he does the business on Saturday night.

The 25-year-old is hunting a hat-trick of stoppage wins in his fourth defence of the title, and believes that the time is right for him and Frampton to get in the ring and settle their brewing rivalry.

“I was pleased to see Carl win the title on Saturday and now it makes perfect sense for us to fight,” said Quigg. “I’ll fight him in Belfast, no problem – but 9,000 in Belfast versus 20,000 in Manchester, it makes more sense to do it there. But if they can find somewhere in Belfast with 20,000 then I can go there, I don’t care. It’s one of the biggest fights in British boxing alongside Amir Khan and Kell Brook – it’s that big, everyone has an opinion. We both think we can win so there’s no reason why we shouldn’t fight – and I know that I will come out with both belts.”

Jamoye is a potent obstacle in the way of Quigg’s quest to face ‘The Jackal’ and the hometown hero expects the 24-year-old to put everything he has into upsetting the odds having replaced Paulus Ambunda for the fight.

“Jamoye is a very good fighter,” said Quigg. “He’s only 24 but he’s been around at a good level for a long time. He’s boxed for a World title in Japan, he is prepared to travel and travels well, he comes forward and he’s got some good names on his CV. He has fallen short at the top level but he would have gained experience from that and will have learned from it.

“To have a late change of opponent again is a shame, no-one was expecting me to do the job I did on Tshifhiwa Munyai. We approached nearly every fighter in the division so I give Jamoye plenty of respect for stepping up. Boxing always throws up surprises and you have to expect the unexpected, so as long as I am 100 per cent ready, focused and sharp, all I have to do is take care of the guy in the opposite corner, that’s the only thing on my mind. This hasn’t affected me at all, I am in the best shape ever and you’re going to see the best of me in there at the weekend.”

Quigg’s clash with Jamoye is part of a great line-up of action in Manchester, with Anthony Crolla defending his WBO Inter-Continental lightweight title against Gamaliel Diaz.