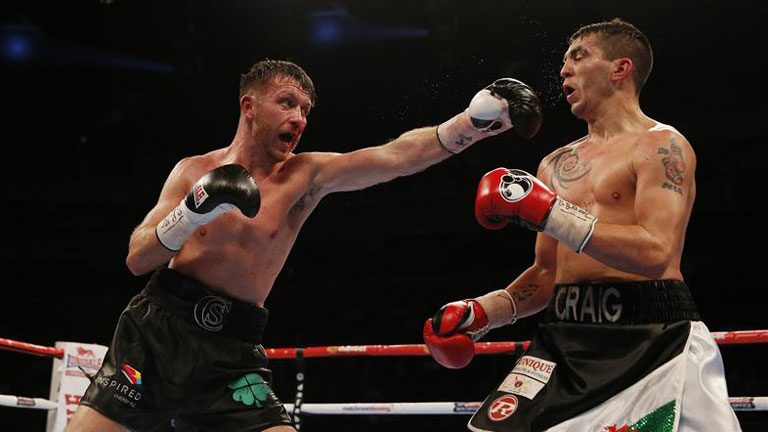 BRITISH lightweight champion Scott Cardle insists he will beat Sean Dodd more convincingly when the pair meet in a rematch for Cardle’s belt on April 2.

Cardle stopped Dodd in the final round of their barnburner back in November, though Dodd had pushed the Scot hard all night.

Cardle was keen to secure the rematch, despite having won the first fight, in order to clarify who the better fighter is.

“Straight after the first fight I mentioned the rematch to Sean Dodd, but the reason I’ve taken the rematch is not for his sake, it’s not to give him another chance,” he told Boxing News.

“It’s more to do with redeeming myself and exorcising the demons of my last performance.

“Sean Dodd did well, don’t get me wrong, but he still lost to me in my worst performance yet as a professional. The next fight will be a lot different.”

The pair will once again meet at the Echo Arena in Liverpool but Cardle insists the vociferous support for the Merseysider will not distract him this time around.

“I had a good game plan for the fight and I got a reception I’ve never got before, I think that played its part, going into the lion’s den and I’m not used to it,” he admitted.

“I’m used to having good support behind me, it was a bit of a shock. But mentally I didn’t think that worried me, once I got in the ring.

“I got caught early on, there were a few things but I’m not using them as excuses – it’s all experience. I got through it. I can say I’ve learnt from it.

“I wasn’t too surprised by his performance, I was more surprised about mine. I’m not expecting much different from him. He’s probably hungrier now and he’s obviously much more confident, I think he believes it now. I’m looking forward to it.”

Cardle is of course a part of Joe Gallagher’s excellent stable of fighters and is spurred on by those training around him, including Callum Smith, who tops the bill in April in a world title eliminator.

He has also been keeping a close eye on Scott Quigg, who is finalising his preparation for Carl Frampton on February 27.

“Everyone’s in the gym now. We’re coming into the last week of the Quigg-Frampton preparation. It’s very important for everyone.

“Joe’s been put under a lot of pressure training all the boys but Quigg’s looking the best I’ve ever seen him – I’m very confident he’ll win by knockout.

“A lot of pressure will be taken off of Joe’s shoulders once that fight’s done and then Joe can focus more on the rest of us lads again, we’ve all got a big year. We’re all helping each other to that end result.”