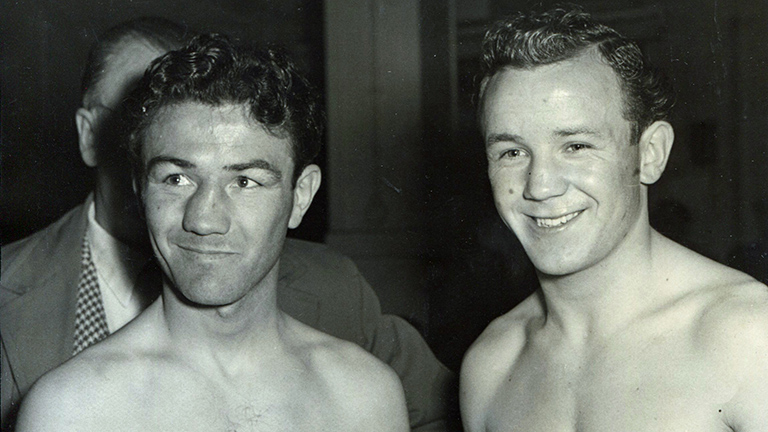 SAMMY McCARTHY, who has died of cancer at 88, was a big amateur talent who became British featherweight champion as a pro in an era when there was tough competition in both codes of the sport.

Yet there was always the feeling that, if not for bad luck or bad choices, the man from Stepney in London’s East End might have done even better.
He was British champion for just six months, and had his last fight aged just 25 years old.

But if his peak proved short, he had certainly found fame: his 1956 wedding photo made the front page of the Daily Mirror and his retirement announcement came live on television’s hugely popular This Is Your Life programme.

In part that was due to a cheerful, winning personality that earned him the nickname “Smilin’ Sammy”. Even when he turned up to functions in his 80s, he was always smartly dressed and happy to chat with anyone.

Sammy’s career was long before my time but I remember meeting him at a Board of Control/BN dinner. He said that while Britain’s boxers were good, their American counterparts were that much better – realism rather than defeatism from a man who never got close to a world title shot (at a time when there was only one champion, in only eight weight divisions).

He was inspired to box by the success of older brother Freddie (an ABA Junior champion in 1938), and by the late 1940s was dazzling amateur fans with his classical left-hand skills. Yet the biggest prizes eluded him – when he turned pro in April 1951, this publication called him “surely one of the most brilliant post-war amateurs never to win a senior crown.”

Sammy had just been eliminated from that year’s ABA Championships on a very close decision in the North East London Divs against Ron Hinson – who went all the way to the national title. And in the two years before that, injury had prevented Sammy from even boxing in the championships.

But he regrouped and in June 1954 became British champion when forcing Ronnie Clayton to retire after eight rounds at White City Stadium. Clayton had held the crown since 1947.

The 15-rounder in Belfast saw McCarthy defend his British title and Kelly his Empire crown, with the Northern Irishman winning clearly on points.
Famed boxing writer Terry Leigh-Lye, in his book From The Ringside, explained the background to an unusually poor performance from the Stepney man.

Apparently, McCarthy had intended to fly over to Belfast the day before the fight – remember, in that era weigh-ins happened on the day of the bout. But heavy fog grounded all flights, so Sammy had to travel to Scotland and take a ferry to Northern Ireland, where he arrived at 7am on fight day having had virtually no sleep.

Leigh-Lye gave Sammy just two rounds with one even and called the McCarthy camp’s travel plans “a grave error of judgement”.

Sammy took a break but upon his return weight-making woes forced a move up to lightweight. He lost again to Sneyers and also to future champ Dave Charnley, but in June 1956 was given a shot at British 135lbs champ Joe Lucy.

A 13th-round stoppage defeat heralded the end of his glory days and when Sammy lost to quality Frenchman Guy Gracia in January 1957 the ride was over.

He stayed in boxing for a while, initially managing 1956 Olympic gold medallist Terry Spinks, and he also ran a pub. But eventually life took a bad turn and by 1979 he was doing time in Maidstone Prison. Reg Gutteridge, there accompanying ex-champions on a visit, wrote in his BN column, “It is incomprehensible to me that good-natured Sammy (“Angel with Gloves On” they headlined) should be jailed a villain.”

He endured some dark times, but once again Smilin’ Sammy battled back and in his later years he was often a welcome presence at boxing shows and ex-boxers’ functions. That’s the best way to remember him.