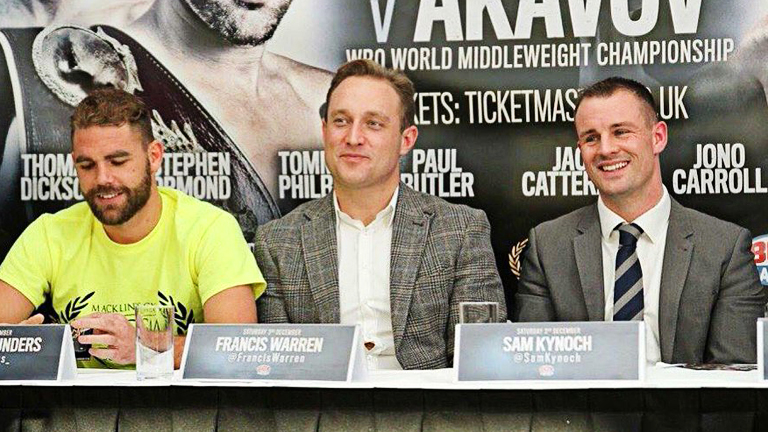 George Storr speaks to Sam Kynoch, who has established his own managerial and promotional outfit after leaving MTK Global

PROMOTER Sam Kynoch split from MTK Global this month. Setting out on his own and replacing the label ‘MTK Scotland’ with that of ‘Kynoch Boxing’ is a big step, but Kynoch has big plans. The Scot hopes the change of direction, and some new signings, can give Scottish boxing a new lease of life.

What led to your recent split from MTK and your decision to establish Kynoch Boxing?

I had a very enjoyable three years under the MTK banner. I took the first ever team to train at the gym in Marbella and the relationship grew from there. When we first started working together we did not envisage just how big MTK would become and it was a real privilege to be their first sister-gym and promotional business. It is fantastic to see how prevalent the MTK brand now is in the boxing world and to see the volume of top-quality boxers under the MTK banner.

For me, the timing is just right for me to start my own managerial and promotional outfit – hence the Kynoch Boxing brand being established. My intention is to do business with both MTK and everyone else in the boxing world, as I believe should always be the case because, as managers and promoters, we work for the boxers and should forge whatever relationships are best for their careers.

What do you think the growth of the MTK label has done for the small hall boxing scene, and how will Kynoch Boxing add to that in Scotland?

Without small hall shows boxing would not be where it is – this is where many will ply their trade for the duration of their careers, but also where some of the stars of the sport start out. A recent example is Lewis Ritson, who started his professional career on the small hall circuit in Scotland and sparred in my gym. It was clear from seeing him spar that he had the ability to make it to the top and it is great to see him on board with Matchroom now and competing on the big stage.

MTK have shown a great commitment to running small hall promotions and I have been involved with many of these promotions, both in Scotland and elsewhere. Since I started promoting under the MTK Scotland banner in June 2015 I have been running around 10-12 promotions each year in Scotland. Given the size of Scotland and the pool of boxers up here it is a lot, but it has served the boxers well – they have always known when they will next be competing and they have been able to build their records up to put them into positions to challenge for titles.

Going forward, I will be continuing with this commitment to regular promotions in Scotland. I run a Boxing Dinner Club at the Crowne Plaza in Glasgow which meets four times each year and I will also run six to eight public shows each year. There are plans to take Kynoch Boxing to new territories within Scotland in the first half of 2019. Our stable spans across the whole country – from Dumfries up to Inverness – so we have lots of options open to us.

What can fans expect to see at a typical Kynoch Boxing show?

Fans will see every facet of professional boxing on Kynoch Boxing promotions. From those making their debuts and targeting Scottish titles down the line to lively 50-50 title fights and boxers who have their sights set on world title glory.

I feel that my next two promotions make my intention to provide Scottish boxing fans with real value-for-money events clear. On Friday September 14, my Boxing Dinner Club will play host to a five-fight bill consisting of two professional debuts, a Scottish title fight between two unbeaten boxers, a Celtic title fight and a Commonwealth title fight. On Saturday October 13, I will promote a 10-fight public show which has two Scottish title fights confirmed and may have a third title fight added.

I think that providing engaging and competitive matchups, such as the Scottish title fights I am promoting, is key. In terms of the event itself, it provides value for money and excitement for fans. And from a management perspective we are assuring that boxers have engaged in competitive matchups on their way up and won’t be found wanting when they step up further.

I want to see an end to boxers amassing extensive records against the usual suspects, only to then get exposed when they step up. Boxers need to be getting the right fights at the right time. Nobody will be rushed, but educated risks will be taken and I don’t want to be working with boxers who do not have ambitions beyond boxing journeymen.

Marc Kerr, Jordan McCorry and Paul Kean stand out in your newly revealed roster. How do you see their careers progressing under your new banner?

I am very close to Marc Kerr, as he started boxing with me. He started coming to classes I was running in order to lose weight and get fit. He soon started sparring and at the time I was operating on the white-collar/‘unlicensed’ circuit – and it wasn’t long before he was competing. He ended up having almost 50 contests on this circuit, including some international contests, the last of which was in Athens in what was by some margin the hottest arena we had ever been in! Since turning pro he has compiled a 12-1 record, avenged the sole loss on his record [which was a contentious one] and won the Scottish middleweight title. Next up is a Celtic super-welterweight title challenge against Jay Byrne on Friday September 14. We are taking it one step at a time, but if all goes to plan in September we will be looking to make a defence of the Celtic title before stepping up to challenge some of the big boys in the top 10.

Jordan McCorry is firmly in the UK top 10 at super-featherweight and he is the reigning Scottish champion. We are now at the stage where I feel he is beyond Scottish title level and that he is ready to challenge for major titles. The Board put him forward for a British title eliminator recently but his opponent withdrew, so we are looking at a few different options now. Jordan could not be easier to manage as he really will fight anyone. He is boxing on October 6 to stay busy and he will be ready when his shot at a major title comes.

Paul Kean is developing very well as a professional. He has had the right tests at the right time and he will face a step up in his next contest – a clash with fellow unbeaten Scotsman Stefan Sanderson for the Scottish super-welterweight Title. Paul’s plan is to claim the Scottish title, defend it and then look towards the Celtic title and beyond. But he cannot look beyond Sanderson, who is also part of the Kynoch Boxing team and also sees this fight as a springboard on to bigger and better things.

Another one of your signings, Jay Carrigan McFarlane, recently got his hands on the Scottish Cruiserweight title after a turbulent start to his pro career. What are your plans for the young Glaswegian?

Jay proved a lot of people wrong in his last outing – not just in winning a title but also proving that he can make cruiserweight and that he can complete the 10-round duration. It is easy to forget that Jay is still just 20 years old and already in his young career he has had a dream start, with KOs in his first two outings, a slot on a world title bill at Madison Square Garden, back-to-back losses and now a Scottish title win!

Jay is now ranked not too far outside the UK top 10, but given his age we will not be rushing him as there is a lot more to come from him. He is yet to mature physically and getting the right sparring is key to his continued development. I co-manage Jay with William Storey, CEO of energy drink brand Rich Energy, and we are currently weighing up options in terms of the next steps for his career.

Which boxer in your new stable has the most fan-friendly style?

This is a tough call as there are several boxers who have styles which could be described as fan-friendly. Two who I must mention are Calvin McCord [3-0 lightweight] and Monty Ogilvie [7-0 featherweight]. If I had to pick out one I would say Dean Sutherland. He has only had one professional contest but it was very eye-catching as he stopped teak-tough Victor Edagha in the second round. Dean is a super-lightweight and he is just 19 years old. He understands that it is not just about winning but also looking good in the process.

Which boxer in your new stable has the most inspirational sporting story?

As is the case in most boxing stables, there are a plethora of inspirational stories, some of which are very personal to the boxers. One which stands out to me is that of Barrie Mcrorie.  Barrie will make his professional debut at lightweight [9st 9lbs] on Friday September 14. Barrie has brought his weight down from 24st, which is an incredible amount of weight to lose and this is testament to his dedication.

Which other Kynoch Boxing fighters should fans be looking out for?

The stable stands at almost 30 boxers and each boxer brings something different to the table.  But in terms of those with big opportunities on the horizon, Ahmed Ibrahim is challenging for the Celtic lightweight title on October 6 and the lightweight division is electric in Scotland at the moment. Two of our boxers will contest the Scottish lightweight title the following week [Thomas Dickson and Andrew Mackay], so this is a division in which there are some fantastic all-Scottish matches to be made. Charlie Flynn is in this division and is the name many of the boxers would like to face because of his profile.

On October 13, unbeaten super-lightweight Craig MacIntyre will challenge for the Scottish title. If he wins this I then have a Celtic title shot in place for him for November. Craig is unbeaten in 10 contests and he is very talented. I have seen what he can do in sparring and he has the potential to go well beyond Scottish and Celtic title level.

What are your hopes for Kynoch Boxing in the future?

I want Kynoch Boxing to be at the forefront of the sport in Scotland and to become a renowned brand across the UK and beyond in due course. I aim to deliver entertaining promotions and to bring through the next generations of Scottish stars under our management.