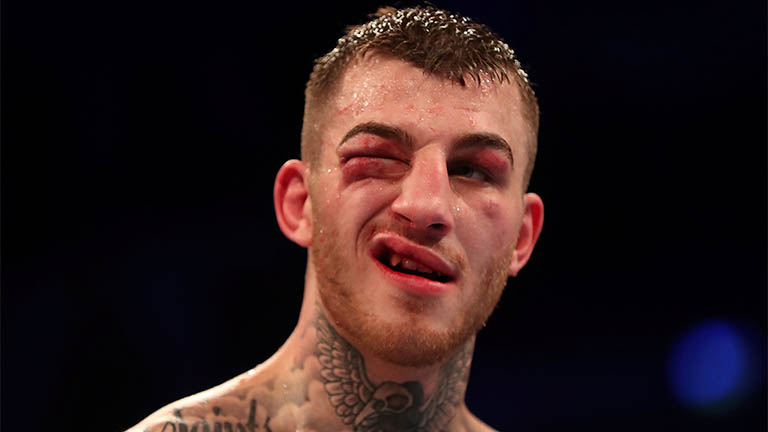 WHILE Matchroom have produced and promoted plenty of fighters better and more accomplished than Sam Eggington, the Black Country slugger might yet turn out to be the promotional outfit’s biggest success story, contextually speaking, simply by getting a shot at a world title. Cynics will undoubtedly scoff that he doesn’t deserve one and they’d have a point. The 25-year-old has lost six times in his career, most recently in emphatic fashion to Liam Smith in March, but in an era when unbeaten records are protected to a fault, Sam Eggington continues to dust himself off after each defeat and grow stronger.

On Thursday night in Florence’s Tuscany Hall, “The Savage” rampaged through Orlando Fiordigiglio to secure a victory that will likely lead to a lofty ranking with the International Boxing Federation in the super-welterweight division. It’s true that the 35-year-old Italian had no business being rated fifth in the world by the IBF but that was not Eggington’s problem. He got the job done and then some when a series of brutal right hands had Fiordigiglio out on his feet and rescued by the referee at 1-30 of the second round.

When the Stourbridge resident turned professional in 2012 he did so purely to earn a few quid. Realising his own limitations, he set his sights on becoming a journeyman to ensure his earnings were regular and not dependant on the amount of tickets he could sell. But things didn’t quite go to plan. Within three years he had starred on Prizefighter, secured a deal with Matchroom, exposed the unbeaten Shayne Singleton, and picked up British and Commonwealth titles at welterweight along the way.

Blessed with concussive power and a supreme engine, Eggington seduced plenty of fight fans with his gung-ho style but reality soon started to bite. Losses to Bradley Skeete, Mohammad Mimone, Hassan Mwakinyo and Smith suggested Eggington had found his level and it wasn’t anywhere near the top. The odds are still stacked against the Briton getting that far but he possesses enough power and bloody-mindedness to ensure he’s never written off completely – as Fiordigiglio discovered.

Eggington – feeding off the crowd chanting his opponent’s name – was the aggressor from the start. A minute into the second round, after bustling the home fighter to the ropes, an overhand right landed high on the target. Fiordigigilo was in trouble, his knees dipped and he tried yet failed to hold on. More right hands followed, a left uppercut whipped under the guard and a savage two-fisted barrage left the referee, Ammar Sakraoui, with no choice but to step in.

With the victory Eggington, still only 25, reinvigorated his career and ensured his fascinating journey has several miles left to run.

Eggington was joined backstage in his celebrations by South Africa-born welterweight Luther Clay, another away day winner on this Matchroom-promoted show. The 23-year-old from Bracknell exposed the unbeaten credentials of Italy’s Dario Morello to win a lopsided unanimous decision after 10 rounds.

Morello found his jab being countered by Clay in the early going. Clearly the better fighter with the better punch, Clay’s powerful right was the key to victory. It sent Morello to the ropes and down in the fifth round, and landed with a thud again in the seventh to trigger the second knockdown.

Things got a little messy from that point. Morello’s gumshield spent more time on the canvas than in his mouth but he engaged with Clay during a hectic eighth. By the end though, the three scores of 98-90 in the “Black Panther’s” favour told the right story. Terry O’Connor was the referee.

Jordan Gill scored the first victory of a British hattrick when he dominated the gritty Nicaraguan Yesner Talavera over six rounds. Gill, in his first bout since losing to Enrique Tinoco in an upset in May, applied educated pressure from the opening bell and scored with eye-catching blows in close. All three judges filed 60-54 tallies in favour of the Cambridgeshire prospect.

The Verdict Eggington continues to thrive through tough education.