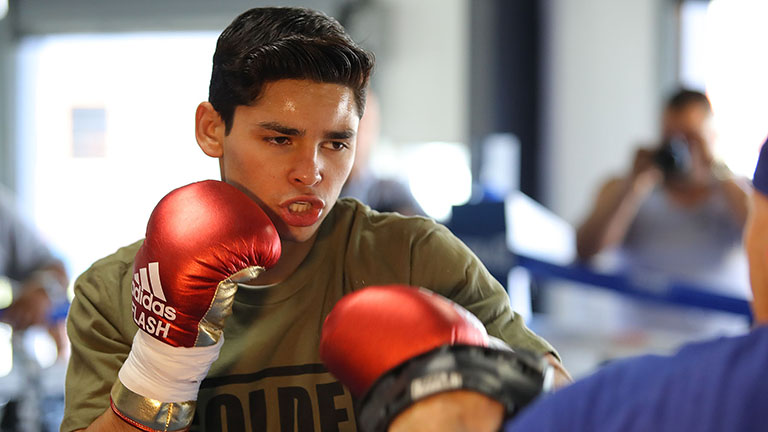 That’s the plan for Garcia anyway, as he confirmed to Boxing News a spar with Davis looks on the table, with the real thing coming next.

Davis (20-0, 19 KO’s), the current WBA ‘super’ super-featherweight world champion, and Garcia (15-0, 13 KO’s), have exchanged in a war of words this past week, with insults and threats thrown around back and forth, and the latest edition of boxing beef was born.

With Davis being a two-time world champion, and Garcia only debuting in 2016, it’s seemed like the two unbeaten Americans wouldn’t cross paths so soon, however, ‘Kingry’ had other plans.

“A lot of reporters asked who I wanted to fight and I say what I say because that’s what I want, and that was Gervonta,” Garcia said, explaining how the rivalry started.

“Then he started getting mad, I guess because I was saying I wanted to fight him, which makes no sense because you say who you want to fight and that shouldn’t be a problem. But he took offence to that, and it’s been building up ever since.

“He’s been making comments on my fights and saying I’m a bum, but that’s how it started – he took offence because I said I wanted to fight him.

“It’s not personal it’s business, and then it just turned into something else.”

In most cases, this is where the promoters would earn their money and build on a fight between the two fighters goading one another, it’s not often the boxers will fight it out, behind closed doors and for no cheque.

But it seems Garcia and Davis are both willing to do so, and this is a rarity, two boxers actually willing to fight each other, not worrying about tarnishing a future fight.

To most people this would seem strange; why fight in a gym when you could do it for real? But to Garcia, he believes this will only enhance the interest in a future fight between the two.

And no, the potential spar will not be recorded, if Garcia has it his own way.

Whatever happens it’s clear Garcia has confidence in himself, leaving the 19-year-old to predict a title fight is only one or two fights away.

“I know probably in the next two fights I should get a chance for a world title, whether if it’s with Gervonta or not,” Garcia said.

“I’ve been talking to [promoter] Oscar [De La Hoya] and we have our plans. Gervonta is definitely on our radar so we’re thinking about it, I’m going to have a meeting with Oscar on Saturday and we’ll talk from there.”

Whatever Garcia and De La Hoya decide is next, another promoter may be keeping a keen eye on the NABF title holder, one Eddie Hearn.

The deal left Garcia praising the efforts of the promoter and admitted a fight in the UK is a future target.

“Eddie Hearn seems like a great promoter, he’s doing his thing, I respect him and I just respect UK boxing overall,” Garcia said. “The fans are great, the fights are always a huge event and whatever the UK is doing they’re doing it right.

“I want to do that as soon as possible, I know I’ve got extreme support from the UK and I’d love to go out there and experience the whole atmosphere with the fans.

“Over here it’s different, I think the atmosphere of the UK fans is just a whole experience.”