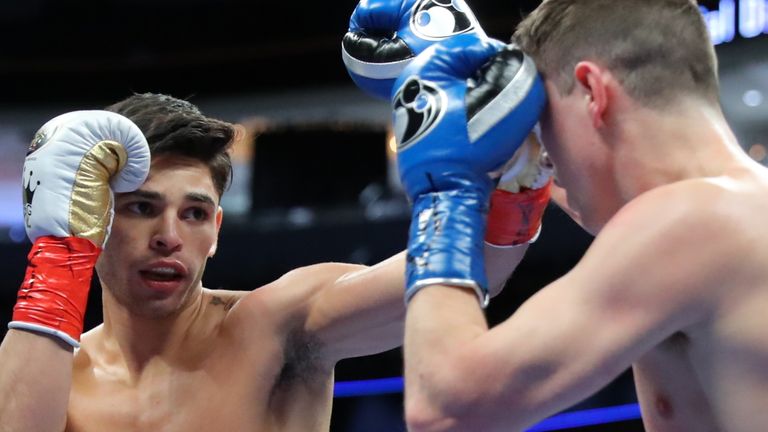 RYAN GARCIA is among the most influential boxers thanks to his ginormous digital following. When he dropped Luke Campbell for the count in round seven of their thrilling showdown in Dallas he also became one of the best lightweights in the world. The rip-roaring left hook to the body that finished the fight will be seen myriad times on his social media channels.

It ended a dramatic fight in an instant. It exhibited more about him as a boxer than his million upon million of Instagram followers ever could. What came before told us plenty about Garcia, too.

After a hectic opening round in which the 22-year-old scored with a quick straight right but swallowed a hefty counter left, the eager to please Garcia set upon Campbell in the second. The 2012 Olympic champion watched the attacks carefully, prodded the starlet with a range-finding right to the body before unleashing a sweet left hook to the jaw. The impact caused Garcia’s head to swivel, his body to collapse and the DAZN commentators to remember there was another fighter in the ring worth referencing.

Briefly, it looked like the 33-year-old Yorkshireman had not only upset the odds but exposed Garcia as more selfie than substance. Then Garcia hauled himself off the canvas and out of the crisis on steady legs. Admirably, his head was clear before the bell sounded to end the session.

“I’ve never been dropped in my life, I was too excited,” Garcia admitted afterwards. “I thought I could crack him and he cracked me. I was a little dizzy, I’m not going to lie. But I thought, ‘what’s the worst he can do now? I’ll just block’.”

He was forced to do exactly that as Campbell remained dangerous in the third round. The 33-year-old was boxing intelligently from his southpaw stance and scored several times with left hands. But the favourite’s confidence was growing despite many of his own blows landing on Luke’s gloves.

Trained by Eddy Reynoso and cheered on at ringside by his gym-mate Canelo Alvarez, Garcia was threatening with both hands. At times he was over-zealous but the power of his punches was evidenced by Campbell’s reddening face. At the end of the fifth, a huge left socked the underdog on the top of the skull. Campbell’s body shuddered and at the bell he groggily retreated to the ropes with his back to Garcia before instinctively lifting his hands to defend himself from punches he presumed were coming his way.

The brash American went for the finish in the sixth. Canelo rose from his seat and urged Garcia to slow down. The youngster acted on the advice and calmed his wild arms. Campbell was still having success but he was working harder and harder to stay out of trouble.

The Englishman had been inactive since August 2019, when he lost a decision to Vasiliy Lomachenko. Garcia had fought twice since, albeit briefly. He knocked out Romero Duno inside a round that November before impressing in February last year when he iced gatekeeper-cum-fringe contender Francisco Fonseca in just 80 seconds. In the seventh round of the biggest test of his career, any doubts that he could do the same to Campbell disappeared.

Garcia, 21-0 (18), forced Campbell back and let fly with his left hand. The older man braced himself for the shot but in raising his gloves he left a gaping hole beneath.

“He was very worried about a hook coming,” Garcia said later. “I’ve had that hook since I was born. He was worried about it going up top.”

The blow curled beneath Luke’s arms and slammed into his stomach. Campbell briefly stepped back before the potency of the shot caused him to drop to his knees. Badly hurt and winded, he bravely found his feet but the count had already reached 10 by the time he was upright. At 1-58 of the round, Ryan Garcia – the Instagram darling – threw his fists into the air and posed for the most meaningful photos of his career to date.

“I showed a lot of people who I really am,” the victor declared. “People wanted to call me a social media fighter. Whether it’s your teacher or your parents telling you who you are, it’s not about them, it’s about you and who you choose to be.

“I was not going to let nothing stop me.”

Teofimo Lopez, Gervonta Davis and Devin Haney may have something to say about that.

The hype surrounding Ryan Garcia is deafening. But in becoming the first to stop Luke Campbell, he has boxing’s attention.