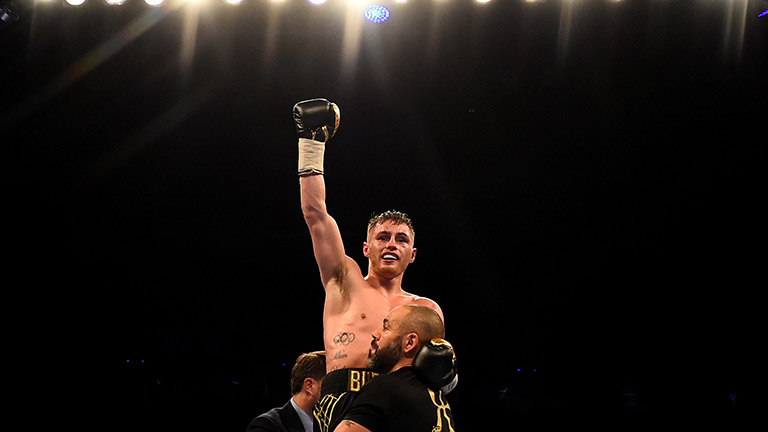 RYAN BURNETT went some way to erasing the painful memories of his freakish loss to Nonito Donaire when he scored a sixth round stoppage against Jelbirt Gomera at Belfast’s Ulster Hall on Friday night (May 17).

Six months have passed since Burnett surrendered his WBA bantamweight title when a back injury left him in agony in round four and ultimately unable to continue. As well as his unbeaten record, he lost his place in the World Boxing Super Series, too.

AGONY: The end is close for Burnett as injury strikes against Donaire in November 2018

But there was never any concern that Burnett would succumb to Gomera as he controlled his Filipino opponent from the opening bell. Joining Burnett’s hometown fans to cheer him on was Donaire himself, ever the gentleman when the gloves are off.

Nonito was taking a pitstop en route to Glasgow where tonight (May 18) he will watch Naoya Inoue and Emmanuel Rodriguez do battle to join Donaire in the WBSS bantamweight final.

Burnett – who has signed with Top Rank’s Bob Arum – scored with fierce right hands in the opening rounds which sent 26-year-old Gomera back to the ropes, hurt and unsteady.

Yet the underdog refused to yield, offering plucky resistance until Burnett drove home a spiteful right to the body which persuaded referee John Latham to end matters at 2-01 of the sixth round. The loser’s record dipped to 14-6 (7).

Burnett – who weighed a career-high 122 1/2lbs – could now meet WBO champion Zolani Tete, himself forced out of the WBSS tournament with an injury prior to fighting Donaire in the semi-finals.

But Donaire remains the top of 26-year-old Burnett’s wish list.

There was also success for another Belfast favourite, Marco McCullough, who picked up the vacant IBF European super-featherweight strap – a title designed to edge him up the world rankings – when he halted Dublin’s Declan Geraghty; referee Steve Gray stopped the bout at 2-23 of the third round.