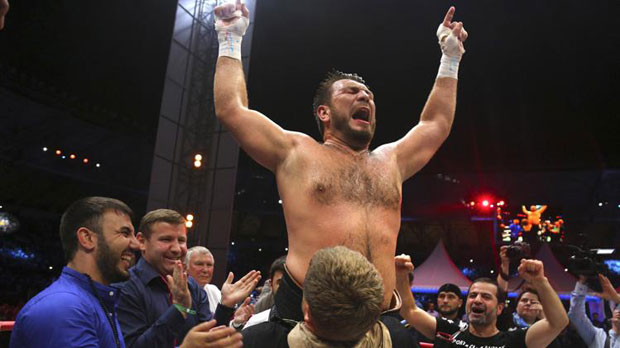 The WBA should be ashamed of themselves, writes Matt Christie

THE WBA should hang their heads in shame following Ruslan Chagaev’s close 12-round victory over Fres Oquendo at the Ahmet Arena in Grozny. The greedy governing body sanctioned this encounter between two undeserving dinosaurs as a ‘world’ title fight, despite Wladimir Klitschko being the WBA champion and being active.

The fight, for the ‘regular’ title (Wlad is named as the ‘super’ champ), appeared doomed when Oquendo failed to show up in Russia for a public workout, and possible replacements were sounded out. Another veteran, Shannon Briggs, was preparing fill in for his countryman until Oquendo, 41 and without a win over a rated opponent since 2003, turned up with 24 hours to spare.

The fight was predictably poor. The legendary Evander Holyfield was ringside and must have re-considered his recent retirement several times during the uninspiring action. Chagaev, weighing a beefy 246lbs, was in control early before Oquendo came on strong at the finish. Two scores of 115-113, and one of 114-114, were fair and condemned Fres “close but no cigar” Oquendo to yet another close points defeat.

In victory, Chagaev moved to 33-2 (20) but any suggestion that he is a ‘world’ champion should be ignored.