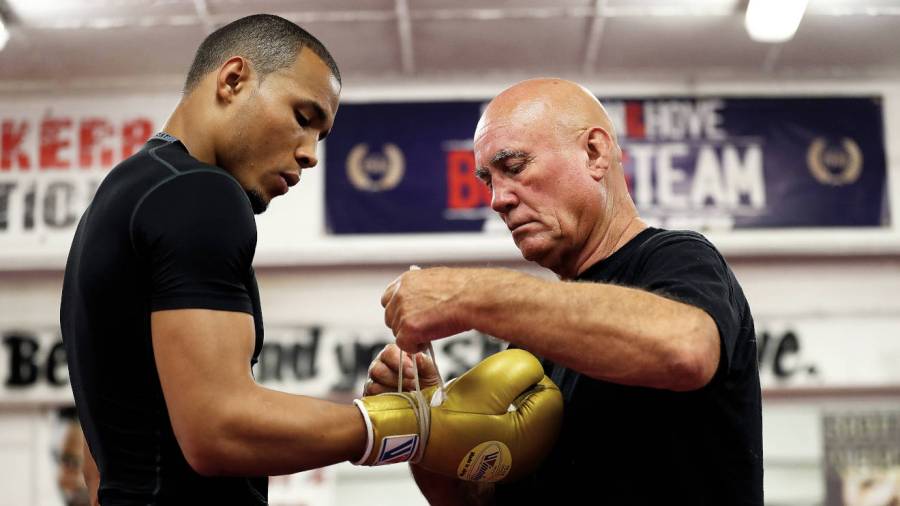 ROY JONES JNR was due to arrive in Hove on Tuesday (September 14) to put the final touches to Chris Eubank Jr’s preparation for his October 2 bout with Sven Elbir at Wembley Arena. Waiting to greet Roy at the seaside gym will be 75-year-old Ronnie Davies, a veteran trainer who has guided Eubank through his professional career after doing the same with his father many years ago.

When talking to Boxing News, Davies was quick to point out that he remains an important member of Eubank’s team. He was absent from the corner of Junior’s 10-round points victory over Marcus Morrison in May, leaving some to conclude that Davies’ services had been dispensed.

“Not true,” Davies told BN with a smile. “I hurt my neck and back when I fell off a ladder and I could not travel from the south coast to Manchester. I couldn’t sit down for that long. But I was involved beforehand and now I’m fully recovered, I’ll be working the corner with Roy in October. I’m still managing Eubank’s training camps from start to finish.”

Davies admits that he did question his future in the sport during lockdown. Eubank Jnr stayed in America with Jones Jnr when it became clear that gyms were not open in the UK. “I’ve got the buzz again,” Davies explained. “During lockdown my attention drifted away from boxing when I couldn’t go to the gym every day. I started to get bored, I lost some interest in the sport. Junior was out in America and I thought that was the end of that. I thought I was going to walk away from the sport and I kind of gave up on it.

“Then I got a call from Anthony Brown at the gym. ‘You’ve got to come back, Ronnie, we need you.’ That helped me. Junior wanted me back and here we are again. Starting over, with new ambitions. I feel just as ambitious now as I did 30 years ago.”

Thirty-two years ago, Davies watched Junior come into the world. “I was outside the room with his father when he was born. I heard him cry for the first time and it was a loud, piercing cry. I looked at Senior and I said, ‘I can’t imagine he’s going to grow up to be a fighter with a cry like that.’ I was wrong wasn’t I?”

Davies made his name with Eubank Snr and Eubank Snr made his with Davies. The pair remain close to this day. Davies is a former Southern Area lightweight champion and retired at the age of 23 in 1970. He went on to become one of the most knowledgeable and respected trainers in Britain. As well as the Eubanks, Davies has worked with several top fighters like Howard Eastman, Tony Oakey and Mark Baker.

Working with the Eubanks has been a challenge but one that Ronnie, looking remarkably fit, has enjoyed. Junior remains the same stubborn boxer as he’s always been but Davies can see new maturity in his charge. “He has mellowed somehow, at least out of the ring. But inside that ring, whether sparring or in a fight, he has that same intensity. He is still looking for the spectacular but when he’s boxing, he’s natural and strong, the combinations he can throw remain as impressive as they’ve always been. He’s always been a terrific fighter.

“He doesn’t always listen,” Davies joked. “Or at least he won’t immediately show he’s listening. So I tell him something and then, a week or so later, you’ll see he had been listening after all because he’s suddenly doing what I told him to do a week before.

“But it’s all about growing a fighter’s confidence. Being a trainer isn’t about fancy routines on the pads, or trying to reinvent the wheel, they were taught all the fundamentals when they were younger. So you develop them. And when it comes to fighting, too many trainers like to think they can change the course of a fight when the truth is there’s only so much we can do at that stage. Everything has to be in place before.

“It’s just as important to ensure they have complete peace of mind. I did exactly the same with the old man as I do with Junior; I look after all the medicals, organise the sparring, ensure he’s there on time for training, ensure he doesn’t leave it all in the gym. Check and double check that everything is in place so the boxer’s only concern is boxing and that he will be peaking in the fight, not in the gym. That was always difficult with Senior, and it’s the same with Junior, they always want to go at 100 miles-per-hour.”

Will it be strange to work with Roy Jones Jnr, one of the legends of the sport and someone who was once a potential rival to Eubank Snr? “It’s a funny old sport,” Ronnie said. “I’m very much looking forward to meeting Roy and working with him. Junior clearly has complete respect for him, and perhaps he needed someone like Roy Jones Jnr for that. Junior tells me Roy is old school like me, that we’ll get on. As long as Junior is happy and in the right place mentally, so am I. It’s a very important stage of his career now, we all know that.”

Big fights against the likes of Gennady Golovkin will be targeted for Eubank if he can get past Elbir in an event that will be showcased as a new era for Sky Sports Boxing. “It’s fitting that Junior is one of the stars on Sky Sports, 30 years after his father was. It will be great to be around Johnny Wish [John Wischhusen] and Adam Smith and those guys again.

“We were all a bit younger back then though weren’t we?”