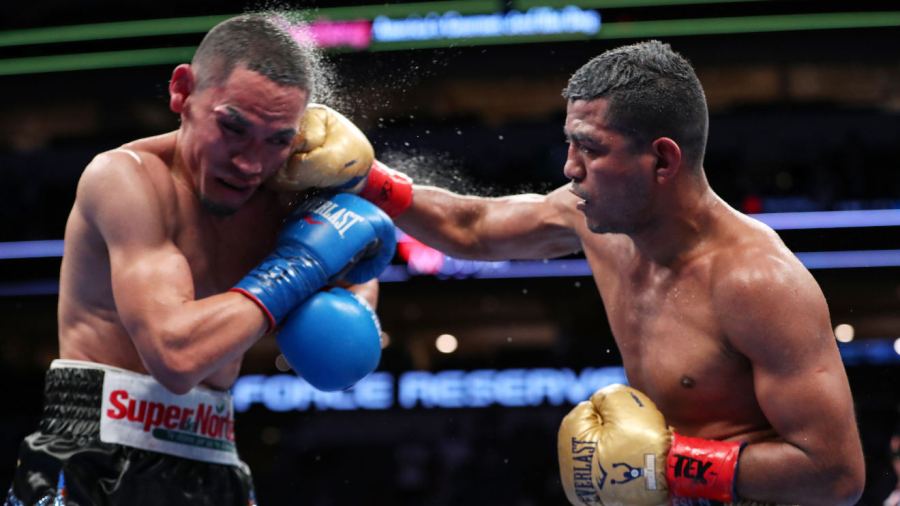 IT ended the way virtually everyone thought it would, with referee Luis Pabon standing between Juan Francisco Estrada and Roman “Chocolatito” Gonzalez, while MC Michael Buffer was getting ready to announce a decision that was so close it had us filled with anxiety as to the fate that awaited the combatants. What we could be certain of was that no matter who had their hand raised the outcome would cause debate.

It was a sombre night at the American Airlines Center with the news having spread earlier in the evening of the death of Marvin Hagler. As tributes poured in for the former world middleweight champion, the biggest one of all may have been delivered by Estrada and Gonzalez, who engaged in the type of head-to-head combat that the Marvelous one was well known for.

A draw (Boxing News had it 114-114) would have been the fairest verdict, such was the effort and effectiveness of both men, but because this will surely set up yet another match between them, in some ways the sport was best served by Estrada escaping with a split decision win. It was scored 115-113 by judges Jesse Reyes (Gonzalez) and David Sutherland (Estrada). The 117-111 in favour of Estrada from Carlos Sucre was far too wide, but should not taint the Mexican’s victory, although you could make a strong case for Gonzalez deserving to have his hand raised instead. Luis Pabon was the third man in the ring.

Round-by-round accounts of fights can sometimes make for monotonous reading and that is something we want to avoid here. Most of the sessions were repetitious – few were clear-cut for either. The fast and furious punches by both, round after round, made it difficult to distinguish who was holding an advantage. And when it did seem like someone had snatched the momentum, the other man would come back and seize control, even if just briefly. Estrada’s jabs and body blows were effective. Gonzalez’s long and looping punches were scoring as well.

Estrada’s WBC and Gonzalez’s WBA super-flyweight titles were on the line, but it was less about who would emerge as a unified champion within the division than it was about who was now the better fighter. Eight-plus years ago when they fought (at light-flyweight) it was the Nicaraguan who came out on top after 12 rounds. Estrada was out to prove that the gap was no longer there. Gonzalez, meanwhile, was desperately attempting to show that there was still a little daylight between them.

Most of the contest was fought in the ring centre, but there were times when Gonzalez forced Estrada to give ground. Estrada did seem to close most of the rounds a little stronger, but his corner apparently felt he was not doing enough. At the end of the ninth round they told him bluntly that he was behind and needed a knockout. A harsh assessment, being that Estrada was already doing everything possible to break his rival. But it was Gonzalez who broke through with the big punches in the final round. Flush hooks, that might have felled a lesser man, merely made Estrada back up and regroup, before he waged a comeback of his own.

Although Estrada would later say that he felt that he had done enough to win, his body language and that of his corner suggested otherwise in the seconds after the decision was announced. There was a slight pause until the reality set in that Estrada had evened the score.

The likely trilogy fight, whenever it may be, will be met with even more anticipation than this rematch. However, with old foe Srisaket Sor Rungvisai being Estrada’s WBC mandatory challenger, a different rubber match could well be next for the champion.

DAZN screened the show and will broadcast Vergil Ortiz vs Maurice Hooker next weekend. Sign up here

Jessica McCaskill deserved to retain her WBC, WBA, IBF and WBO welterweight titles against Cecilia Braekhus, but the margins on the judges’ scorecards reminded us once again why the state of Texas has such a questionable reputation for fairness. This is not to say there was any bias involved. It just appears that the judges are much more impressed by any fighter who moves forward, whether it is effective aggression or not. That can be the only logical explanation for McCaskill, from Chicago, being awarded a unanimous decision by lopsided scores of 98-91 (Javier Alvarez), 99-90 (Gloria Martinez Rizzo) and 100-89 (Chris Tellez). Boxing News had McCaskill winning 95-94.

At least the right woman won. If we are to make an argument on the judges’ behalf, it can be said that McCaskill won her rounds clearer than Braekhus won hers. But still, it is an absurdity for the former long-standing undisputed champion from Norway (via Colombia) to have only garnered three of the 36 total rounds on the judges’ cards.

McCaskill raced to a big lead over the first four rounds, intent on sending a strong message that, having handed Braekhus her only career defeat in their first fight seven months ago, this had not been an aberration. Strong punches rocked Braekhus, who was in the unaccustomed role of challenger. In the early going, Braekhus had to periodically hold on to survive the onslaught, but McCaskill was putting so much into her punches that fatigue started to set in. Braekhus then started to chip away at McCaskill’s lead in the fifth round, darting in and out and scoring with fast if not hard blows. However, she had been warned earlier by referee Rafael Ramos for excessive holding, which resulted in Cecilia having a point deducted in the seventh round.

Braekhus remained wary of McCaskill’s power until the final round, when she held her ground and fired away. It was a good round for Braekhus, but as we know now it was not nearly enough. She plans to carry on despite this defeat, calling on McCaskill to box her for a third time, but the champion has her sights set on a rematch with previous conqueror Katie Taylor, or a catchweight fight against Claressa Shields.

History was beckoning for Mexico’s Axel Vega, who stands at under 4ft 10ins. Victory over WBA light-flyweight champion Hiroto Kyoguchi would have made him the shortest boxer ever to win a world title. But Vega’s inclusion into the record books for this accomplishment will have to wait at least a bit longer, as he was stopped at 1-32 of the fifth round under bizarre circumstances.

It had been a pretty even fight over the first four rounds, with neither fighter willing to concede ground. Then, in the fifth, Vega connected with an overhand right to the top of his Japanese opponent’s head. After landing the shot, the young challenger abruptly turned around in excruciating pain, leaving himself open for Kyoguchi, who immediately pounced. But credit should go to referee Raul Caiz Jnr, who quickly stepped in before any punches could land on the defenceless Vega. As it turned out, Vega had broken the fourth metacarpal bone in his hand, and was therefore unable to continue.

Douglin, who has been in with some big names in the past, was hurt on various occasions. Yet he proved resilient and made Williams work the whole way in a fight that reportedly promoter Eddie Hearn was not too keen on the Matchroom prospect taking.

Camden, New Jersey’s Raymond Ford looked to have done enough to beat Albuquerque’s Aaron Perez, but it was ruled a split draw. Martinez had it 77-75 for Ford. Mitchell marked an absurd 78-74 for Perez, with Griffin coming in at 76-76. Ruben Perez officiated.

Frenchman Souleymane Cissokho had what amounted to no more than a hard sparring session in stopping an outclassed Daniel Echeverria at 1-29 of the sixth round of a scheduled eight. The Mexican was down twice before referee Rosario Solis called a halt.

THE VERDICT A glorious main event, featuring one not-so-glorious scorecard.