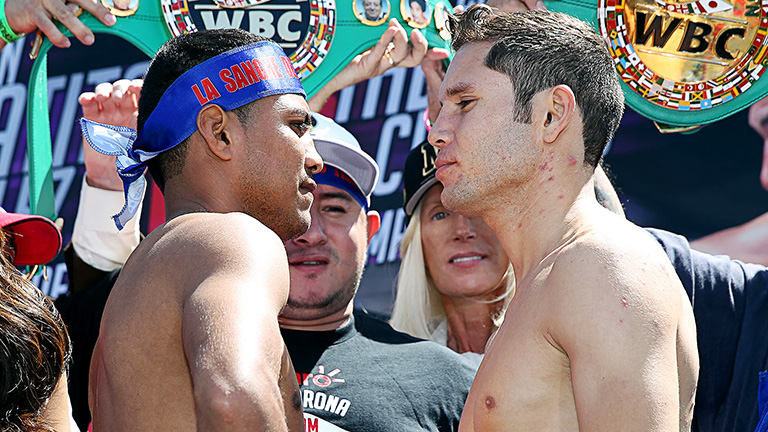 The best boxer in the world fights on Saturday night. You should watch. Roman Gonzalez (45-0, 38 KOs), the soft-spoken, diminutive Nicaraguan is going up in weight to challenge, arguably, the most dangerous fighter in the super flyweight division, WBC champion Carlos “El Principe” Cuadras (35-0-1, 27 KOs).

Before they could face each other in the ring, they had to first step on the scales and make weight before tomorrow’s championship match. “Chocolatito, as Gonzalez is affectionally known, playing the role challenger for a change, weighed in at 114.6. The champion, Cuadras, tipped the scales two tenths higher at 114.8.

In pursuit of his fourth divisional title, Gonzalez, the pound-for-pound king, will face a stiff challenge against a champion that hasn’t seemed the slightest bit vulnerable, yet alone completely beatable, in over a half-decade. Some would argue that it has been longer than that.

To be fair, Gonzalez hasn’t either. In his dominance, the three-division world champion has made world champions, across two different continents and three weight classes, look utterly pedestrian.

However, that all happened when he was picking on people his own size. Could this latest move up in weight prove to be too much for the likely first-ballot future hall of famer?

Gonzalez has faced unbeaten fighters before but none as accomplished, as tough, or, frankly, as big as Carlos Cuadras.

There’s a certain swagger that you carry into the ring when you’ve never tasted defeat and the Mexican champion is brimming with it. The promotion has been filled with gems from Cuadras referencing melting Chocolate, eating chocolate, and, well, you get the point.

Gonzalez, on the other hand, has responded to his opponent’s bravado with humble smiles, deferential shrugs, and noble compliments.

That said, the final order of business has been filed. Tomorrow night we either learn that Cuadras is still the man to beat at 115 pounds, or that Roman “Chocolatito” Gonzalez really is that special.