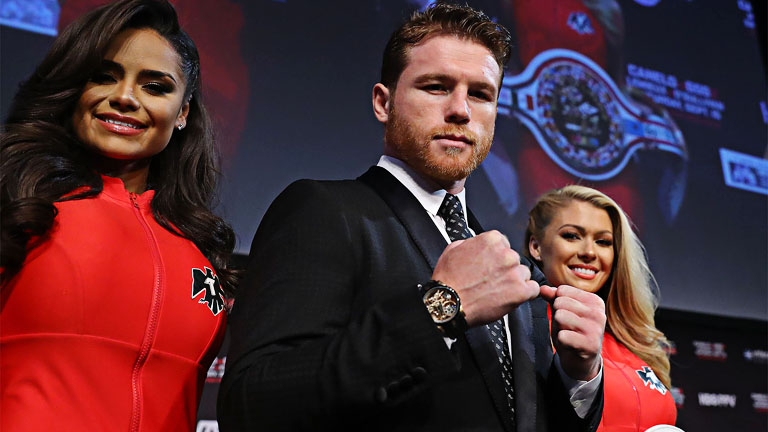 From taking a bus home from the Salford Sports Centre after his pro debut to fighting Mexican superstar Canelo Alvarez at Madison Square Garden in December. Rocky Fielding speaks to John Dennen

NOBODY expected Rocky Fielding to fight Canelo Alvarez. Not even Rocky Fielding. The Liverpudlian had won a ‘regular’ or secondary super-middleweight title from the WBA when he beat Tyron Zeuge earlier this year. He thought that might get him a bout with Chris Eubank Jnr, maybe James DeGale, well known fighters in the UK. He did not expect Alvarez, the Mexican superstar fresh off defeating Gennady Golovkin for the WBC and WBA middleweight titles to come calling.

“I had no idea at all,” Fielding told Boxing News. “DeGale’s name and Eubank’s name were flying around. Last Wednesday I was lying in bed at half nine and I got a phonecall off Jamie [Moore, his trainer]. I saw his name and I thought it was some sparring for someone. [He said,] ‘Canelo wants to fight you.’ My belly did a little somersault of excitement. I said, ‘Really?’ He said yeah, yeah, they’ve been in touch. I just said yeah, let’s do it. I’m up for it. He said okay, I’ll let them know.”

“It went quiet for three or four days,” he continued. “I was checking my emails every day in case something came through and I was checking twitter for any announcement, just nothing.”

Then on Friday night he got a text message. In 15 minutes Canelo was going to announce the fight.

“It was a big shock for everyone in boxing, in the boxing world. Just Canelo stepping up to super-middleweight and picking me to fight. I’m happy and I’m up to the challenge,” Fielding said. “My phone blew up with messages, it was a good feeling, exciting.”

As the world was reacting to the news that on December 15 Rocky Fielding would be fighting Canelo Alvarez at Madison Square Garden in New York, the Liverpudlian had more pressing matters in front of him. “At the same time it was announced my little lad was having a right little fit. I took him to bed, normally he’s nice and quiet and goes to sleep and for some reason he was screaming. I was sitting with him, my phone’s going off its head, it’s been announced, I had to sit with him,” Rocky said. But as he watched his son falling asleep he thought to himself, “Right this is it. This is my family and this is what I’m doing it for.”

“The feeling was good,” he continued. “I’ve got to do it for them, I’ve got to pay the bills, I’ve got to look after my kids and my girl. That’s what life and this sport’s about. Getting in, getting out, achieving what you’re going to achieve basically, as much as you can. My life after this will be making sure that my kids are secure and are going to get a good life out of what I can provide for them. It was everything.”

It is a life changing event. “But before even that got mentioned, it was Canelo wants the fight, sound, yeah, let’s do it. Without the rest of it. But I knew fighting him it’s going to be. It was life changing,” he said. “I’ve got two kids. It was the biggest purse I’m probably going to get now. I beat him then it’s off the scale. But it’s life changing.”

As dangerous as Canelo is, Fielding did not hesitate when it came to accepting this fight. “There was no turning it down. Fighting on a big undercard in London is great but fighting in Madison Square Garden, what would you rather do?” he said. “It was a no brainer.”

“I was there three years ago doing a tour with my girlfriend around Madison Square Garden and I got a picture outside, saying one day, do you know what I mean? Not even slightly even thinking I would. I just put one day, every fighter’s dream is to fight at Madison Square Garden, I just put one day, not even thinking. I went to a basketball game, in the upper tier I was looking down thinking imagine fighting here. All the stars that were there, Lebron James was playing,” he recalled. “Then three years later I’m getting a phonecall about fighting the biggest fighter in the world.”

Fielding has come a long way. “I turned pro I didn’t have a promoter. It was just me and Oliver [Harrison and] my manager. I was on Oliver’s shows. My debut was in Salford Sports Centre. I even jumped on the double decker bus on my way home with my fans. I boxed at Preston night clubs. I went from having no backing or anything like that, to going to Madison Square Garden. I’ve had a few setbacks,” he said. “I’ve worked through it all and just kept positive.”

He has no illusions about the scale of the task facing him, saying, “He’s the face of boxing at the minute, he’s pound for pound for the best. [Then] there’s me. He wants to fight me. It’s a challenge. It’s what I’m in boxing for. Fighting the best in the world at Madison Square Garden, regardless of anything. It’s a big, big ask and a big challenge. But anything can be done in boxing. He’s coming up a weight and I’m big for the weight. It’s every fighter’s dream. To fight the best, to be the best you’ve got to fight the best and to top it off at Madison Square Garden… It’s surreal.”

Rocky warned, “I’m going as a champion, I’m not going because I’m fighting Canelo at Madison Square Garden. I’ve got to put that at the back of my head now and train to win, train to beat Canelo and for the next 10 weeks now I’ve got to put myself through it to do it.

“He is a complete elite fighter, experienced, 50 fights, he’s only lost to Mayweather, turned pro when he was 15. So I’m up against it and I know that. But if I can stick to what I’m good at, I can do it. I’m not going there to lie down.”

Key for Fielding will be his size advantage. Alvarez has only fought above middleweight once, when he boxed Julio Cesar Chavez Jnr at 164lbs in 2017. It was a frustrating fight in which a largely negative Chavez took Canelo the distance. “[Chavez at 164lbs,] he must have been really struggling for that, and the style that Chavez has, he sits there in the pocket and fights there. So I can take a little bit out of that. When he [Alvarez] has stepped up to middleweight, Golovkin he went the distance with,” Fielding noted. “His knockouts have been at the light-middleweight, which he’s a beast at. But I take little things. It’s probably a challenge for him stepping up and it’s a big challenge for me. So we should clash well and see what comes of it.

“I’m going to be a lot bigger height-wise and everything. That’ll be an advantage. I’ll let Jamie and Nigel [Travis] come up with the gameplan but Jamie will study Canelo, he probably has already because he’s probably a fan as well and come back with something. I’ll take it, we’ll work together on it. He’s small, short, he’s much smaller than me, he’s shorter so there’s no point trading with him toe-to-toe. I’ve just got to use my advantages in height and being the natural super-middleweight whereas he’s not.

“Anything can happen on the night. If I catch him, I’ve got the power.”

He added, “I’ll have to keep what’s worked the last couple of fights. The gym’s buzzing with [Carl] Frampton, Martin [Murray], they’ve all got fights coming up in December so everyone’s working hard, pushing each other on. The camp’s good at the minute.”

The next step will be a press conference in New York and going face-to-face with the most famous man in the sport. “I’m going to enjoy that as well. I’ll have to go buy a nice suit. I’ve only got one from the baby’s Christening,” Fielding laughed. “Everything’s changing [but] I’ll stick to who I am and what I do.”

Fielding has been plucked from an ordinary life to be a part of one of the biggest fights in the sport. It is a real life Rocky story.