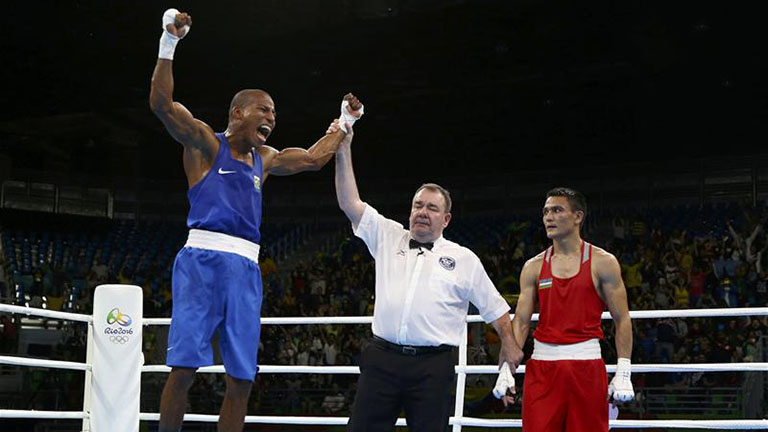 From training with flip-flops for pads and purloined bandages, Robson Conceicao is Brazil's best hope for gold at Rio 2016, writes John Dennen

ROBSON CONCEICAO was always a fighter. He grew up on the street of Salvador, Brazil, selling what he could on the streets. He got into boxing thanks to his habit of beating up other children.

“I was a kind of bully as a child,” he said. “I was quarrelsome. I had an uncle called Robert; he was a fighter by personality. He was quarrelsome too and I wanted to be like him. So then I met a friend of mine who was already involved in boxing, and he invited me to train and to stay with him.”

Boxing doesn’t require much but it was hard for Conceicao to even get the basic equipment he needed. “We had nothing so we did our best to get things,” Robson said. “I went to the hospital and faked that I had an arm injury. The nurses covered my arm with bandages and then I used those bandages to tape my hands for training and sparring. My friend used to put flip-flops on both of his hands for me to punch when we trained.”

He believes coming up through such a deprived background has given him the qualities he needs to succeed. “As a child I worked, helping my gran sell things so we could get by. And all the energy, the focus, the determination that I bring to the ring comes from my past and I use that to achieve my goals. It’s made me a humble person since the start of my career,” Robson said.

Conceicao guaranteed himself a bronze medal when he beat Uzbekistan Hurshid Tojibaev in the quarter-finals but he is Brazil’s best hope for a boxing gold medal at Rio 2016. “”I have had a very difficult life. I’ve been through so many different things in my life to survive. So I don’t see the Brazilian people cheering for me as a pressure. I see that only as an encouragement that will help me go further. I am so happy right now but it’s just the beginning. I’m not satisfied to be a semifinalist; I want even more. So I appreciate the encouragement and I do what I need to keep going,” he said.

His task in the semi-final will be hard. He boxes Cuba’s Lazaro Alvarez, the World gold medallist, on Sunday (August 14).