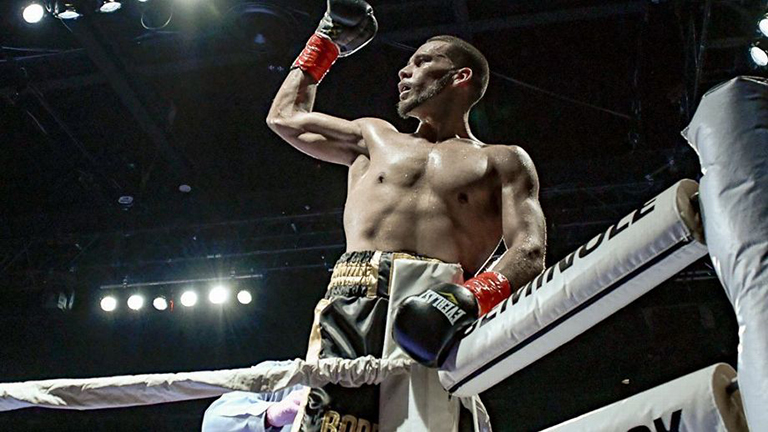 Robert Duran Jr, son of the great Roberto Duran, tells Lee Gormley he plans to create his own legacy while proudly holding up his famous family name

ROBERTO DURAN JR finds himself in a daunting situation, as the son of the legendary Roberto Duran embarks on his own personal journey into the unforgiving business that is professional boxing.

Beginning any boxing career brings a great deal of pressure and expectation. But for the offspring of a former fighter stepping into the sport, there’s even more demand. Add in being the son of one of the greatest to ever lace up a pair of gloves and, despite the opportunities such esteemed lineage might bring, it’s surely a heavy burden to carry.

Just ask Duran’s oldest son, also named Roberto Jr, who struggled to step out of his father’s shadow during a professional career that spanned from 2000-2004.

But in March of this year, the latest Roberto Jr, made a successful professional debut, showing exciting glimpses of the devastation that his father once showcased in the ring for so many years on route to a fourth-round stoppage victory over Cuban Miguel Morales.

Surely, with such esteemed footsteps to follow in, the 29-year-old, who was born in Miami, had to feel the pressure on his broad shoulders heading into his maiden ring outing?

“Not at all,” Duran told Boxing News. “I felt confident and very good before the fight and I was in great spirits.

“I loved every moment of my debut. It was an amazing feeling to be representing the family name.”

There’s an aura of confidence surrounding the promising son of a legend when asked if he can carry on the Duran name in style, making his own impact in the process.

“Oh most definitely. I started off my debut the right way,” he jokes, with a reflective nod back on the knockout success of his father ‘Hands of Stone’.

Duran Jr was born in 1989, the same year his dad rallied to score one of the greatest victories of his prestigious career. This was, of course, when a 37-year-old ‘El Cholo’ clinched the WBC middleweight crown by beating Iran Barkley in a dramatic back-and-forth clash ultimately hailed as The Ring Magazine’s Fight of the Year.

“Growing up I went with my pops to train with him regularly,” continued Duran Jr. “So watching him influenced me to also box. Just the training and everything about it was highly inspiring to me.”

‘Manos de Piedra’ finally retired, for good, at the age of 50 in 2002 with a record of 119 fights, 103 wins, and 70 knockouts, a remarkable career which incredibly spanned five decades. The Panama great subsequently became only the second fighter in history after Jack Johnson to have competed over such an extensive period of time.

Widely hailed as the greatest lightweight in history, Duran achieved world title supremacy in four divisions (lightweight  welterweight, light-middleweight and middleweight). Those are some enormous gloves too fill, but New York-raised Duran Jr isn’t letting the pressure weigh him down in his respective pursuit of glory.

“It’s a little pressure to do with who my father is, so people are going to be expecting a lot from me,” he admitted. “But I must maintain focus and create my own name.”

There are an abundance of examples of children of famous former fighters attempting to make their own mark in the squared-circle professionally, from Laila Ali and Julio Cesar Chavez Jr to, more recently, Chris Eubank Jr.

More often than not, it proves to be too hard an act to follow in the footsteps of such an acclaimed parent. But Duran Jr is relentlessly training and working in order to become one of the rare exceptions.

“I’m motivated, I’m dedicated and ambitious. I’m not trying to make myself nor my father’s legacy look bad. I differ with just those reasons. I have a lot riding on this.”

The hopes and expectations are there. But so too is the self-belief, drive and focus to craft his own personal success story within the sport in which his surname is iconic. Duran, the second coming is here, as Robert Jr confidently promises to hold up his father’s name with pride, while creating his own legacy in the ring.