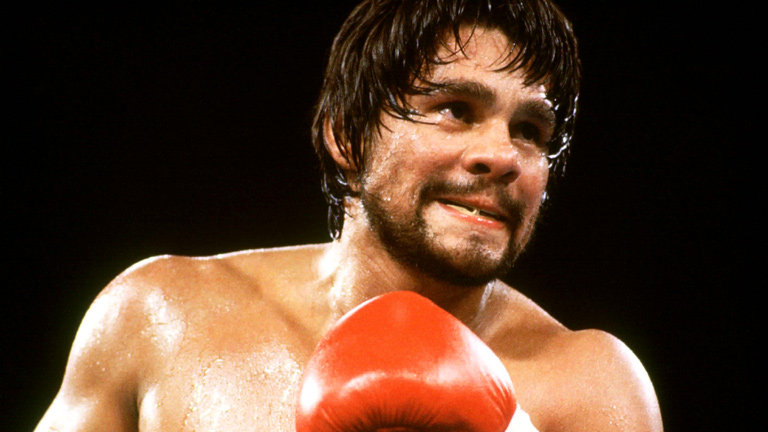 He came a long way to see his nemesis, Esteban De Jesús, in his dying days, out to Rio Piedras and to a converted milk factory where the malarial sunlight filtered in through grimy windows overlooking sickbed after sickbed. Now wraith-like, 90 pounds, and seeking solace from a future afterlife, De Jesús had been an addict, a killer, a convict, one of the top lightweights in the world, and, for a little while, at least, a national hero, the first man ever to beat Roberto Durán.

WITH José Torres retired and Carlos Ortiz, the gifted ex-champion whose prime began during the West Side Story era, nearing the end of a creaky comeback, New York City was ready for another Puerto Rican star. In 1972, Esteban De Jesús, born in hardscrabble Carolina, debuted at the Felt Forum in Madison Square Garden, stopping George Foster in eight rounds. A stablemate of Wilfred Benitez, and trained by Gregorio Benitez, De Jesús was a precise counterpuncher with a ruinous left hook and enough dark secrets to last a lifetime. After building a record of 33-1, De Jesús, already dabbling in the nightlife, set his sights on bigger targets – and the temptations that often accompany such ambition. In New York City he had impressed the afición with his sharpshooting skills, but not many believed he would be a threat to young Roberto Durán, the recently crowned lightweight champion stalking greatness.

If New York City was impressed by De Jesús, it was wonder-struck by Durán, who coldcocked Benny Huertas in his Madison Square Garden debut in September 1971 and less than a year later trampled stylish Ken Buchanan for the lightweight championship of the world. Even after building up an insurmountable lead on the scorecards, Durán could not resist his own malicious nature. A split-second after the bell ending the 13th round, “Hands of Stone” buried a shot below the belt that left Buchanan writhing on the canvas in agony. Poor Buchanan was ruled unable to continue, and Durán was declared the TKO winner, beginning a reign of terror that would last for the rest of the decade. Brash, bold, and brutish, Duran reveled in his reputation for savagery. As a child, he hustled around on the dusty streets of Chorrillo, a Panama City slum that could have doubled as the setting for a Graham Greene novel. Forever, Durán would be hungry—for money, for women, for celebrity, for combat. But winning the title had given Durán a chance to satiate some of his pangs and his gluttony would cost him the next time he fought in Manhattan.
Because Durán and De Jesús both had reputations in New York City, where boxing-mad Latinos supported their countrymen as a matter of national pride, a matchup between them was inevitable. They met in a non-title scrap on November 17, 1972, before a partisan crowd of 9,144. What was supposed to be a mere distraction from carousing turned into a nightmare for Durán within 30 seconds of the opening bell, when De Jesús landed a snapping right hand that stung him and followed up with a sweeping left hook that nailed Durán flush on the jaw. Stunned, Durán crashed to the mat for the first time in his career. When Referee Arthur Mercante completed the mandatory eight-count, Durán dove into the fray again but he could never claw his way back into the fight.

By feinting and making himself a moving target, De Jesús kept Durán off-balance from round to round, peppering the future legend with jabs, hooks, and the occasional cross. At the sound of the final bell, a disgusted Durán turned away from De Jesús with a defiant gesture of his glove. The unanimous decision went to Esteban De Jesús.

After scoring the biggest win of his career, De Jesús went on to post a pair of decisions over contender Ray Lampkin and a knockout over former super lightweight champion Alfonso “Peppermint” Frazier. Durán, meanwhile, released his raw fury in successful title defenses against Jimmy Robertson, Hector Thompson, and Guts Ishimatsu. It took a career-high payday of $125,000 to lure him into a rematch against De Jesús – this time in Panama.

On March 16, 1974, De Jesús and Durán squared off before nearly 16,000 spectators at the Gimnasio Nuevo Panama, in Panama City, where the dry season guaranteed temperatures of over 100 degrees at ringside. After a grueling struggle to make weight, De Jesús was so drained that Gregorio Benitez tried to postpone the fight under the pretext of a cut De Jesús suffered in sparring. A $40,000 purse convinced De Jesús to enter the ring under unfavorable circumstances.

If De Jesús was worried about the inferno-like conditions, he seemed oblivious to them when the opening bell rang. Both men forced a torrid pace in the dizzying heat. Durán, well-prepared for his only conqueror, fought with the trademark frenetic style he had been unable to muster in the first bout. Still, De Jesús seemed ready for the onslaught and for the second time in as many fights, he toppled Durán with a lashing hook barely a minute into the first round. From that point on, Durán and De Jesús—the best lightweights in the world—warred toe-to-toe until one of them began to wilt. It was De Jesús who succumbed. With less than a minute remaining in the seventh round, a clubbing right hand dropped De Jesús to his knees. He beat the count but took more punishment over the next few rounds, and at the end of the 10th, he told Gregorio Benitez that he could go no further. Unmoved, Benitez pushed De Jesús out of the corner for one last stand, which lasted less than 30 seconds. Sensing the kill, Durán moved in on a wobbly De Jesús with both hands churning. A looping right sent an exhausted De Jesús crashing to the canvas, where he took the full count on his knees.

Although De Jesús had absorbed a beating from Durán (as well as one to Antonio Cervantes in losing a decision for the WBA super-lightweight title in May 1975), he rebounded by outpointing Guts Ishimatsu for the WBC lightweight title in Bayamon in May 1976. De Jesús defended his WBC title three times in Bayamon, turning back Hector Julio Medina, Buzzsaw Yamabe, and Vincent Mijares—all by stoppage. Finally, nearly four years after their last meeting, the scene was set for De Jesús and Durán to renew their hostilities, this time for the undisputed lightweight championship.

Except for a few heated insults exchanged before their previous fights, Durán and De Jesús were fierce but not enraged competitors. In the days before their unification match, however, Durán made his feelings about De Jesús clear. “I don’t like him for a lot or reasons,” Durán said, “mostly because he is the only man ever to beat me. And he is the only man to ever knock me down. I don’t like him for a lot of reasons, but I have to respect him for them.”

Their rivalry reached critical mass at the weigh-in, when both camps took part in a scuffle that made the usually unflappable Don King jittery about the possibility of having to postpone the fight.

On January 21, 1978, Durán and De Jesús met at Caesars Palace in a unification bout broadcast nationally by CBS. Already hollowed out by a drug habit that predated his championship reign, De Jesús looked slack during the prefight instructions. He entered the ring a 5-7 underdog that afternoon, but the truth was that De Jesús , at 26, was only the latest nostalgia act to hit the Vegas strip.

To make matters worse for De Jesús, he was now facing a Durán at his absolute peak. Durán, a juggernaut when he flattened De Jesús two years earlier, answered the opening bell by jabbing and circling. By adding guile to his attack, Durán ensured that De Jesús never had a chance at victory. Although he boxed well in spots, De Jesús was forced into the uncomfortable role of aggressor for most of the fight. In the 12th round, he closed in on Durán, who connected with a tripwire right hand—half cross, half uppercut—that dropped De Jesús in a heap. Showing remarkable courage, De Jesús crawled across the ring and hauled himself upright with the aid of the ropes. When the action resumed, Durán battered his bruised adversary with both hands until the fight was finally halted.

A year after unifying the lightweight title, Durán would abandon his title to focus on the welterweight division, where in less than two years he would notch his greatest achievement: a stirring win over Sugar Ray Leonard in the first Superfight of the 1980s.

For De Jesús, losing to Durán in their rubber match accelerated his downward spiral. In his last fight, De Jesús challenged Saoul Mamby for the WBC super lightweight title in Bloomington, Minnesota, far from the bright lights of Las Vegas and New York City. On July 7, 1980, Mamby stopped De Jesús in the 13th round.

In retirement, De Jesús began making headlines for all the wrong reasons. Now adrift among the junkie subculture, De Jesús saw his drug habit grow worse. He was arrested during a raid in San Juan and charged with possession of heroin. Then, on November 27, 1980, fueled by a potent combination of heroin and cocaine, De Jesús turned a road rage incident into a tragedy when he shot and killed an 18-year-old man after a high-speed chase on an expressway. He was convicted of first-degree murder and sentenced to life in prison. At Rio Piedras State penitentiary, De Jesús became a preacher and daily prayer meetings became part of his routine. In 1985, when De Jesús found out that his brother (with whom he shared needles to inject heroin) had died of AIDS, he had himself tested by prison officials.

The result was a death sentence: De Jesús tested positive for the virus.

Within a few years, De Jesús was so ill that his sentence was commuted on the condition that he remain in an AIDS clinic for treatment. “The doctors tell me that I have anywhere from one to four years to live,” De Jesús said in a television interview in February 1989, “but I hope God will support me longer.” There would be no reprieve for the magnificent lightweight whose troubles – combined with his losses to Durán – would permanently overshadow his career. Three months later, he was dead.

A few weeks before he died, however, an ailing De Jesús received a visit from Roberto Durán, whose empathy brought him to Puerto Rico from hundreds of miles away. Durán met his ex-rival for the fourth and final time in a weathered milk factory converted into a makeshift sickbay. During the late-1980s the growing AIDS epidemic sparked a national panic in the United States. Before that, however, before the number of AIDS deaths spiked from hundreds in 1982 to more than 14,000 in 1989, AIDS, too often thought of as the bane of the underclass, was virtually a taboo subject. In addition, AIDS victims suffered discrimination and the process by which the disease spread was still shrouded in ignorance. Under any circumstances, it seemed, AIDS was something to fear with almost pathological intensity.

But Durán immediately moved in to embrace De Jesús. “When I see him there so thin,” Durán told Christian Giudice, “my tears run out because he used to be a muscular guy. I start crying and I hug him, and I kiss him and I tell my daughter to kiss him.”

This act of compassion was captured in a photo that was distributed worldwide by the Associated Press. In stark black and white, it reveals two warring selves, now achieving another kind of glory, an acknowledgment of human frailty and the bonds between us all, a haunting memento mori.