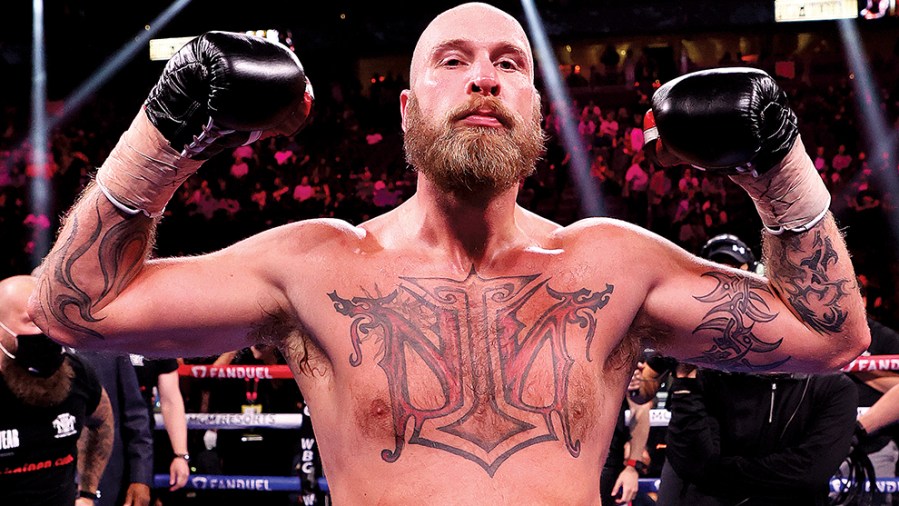 ROBERT HELENIUS won’t allow his name to be tossed onto a scrap-heap of faded heavyweights. The Finnish heavyweight has amassed a 31-3 (20) record over 14 years as a professional and professes to Boxing News that he has found a new love for boxing ahead of headlining Saturday’s US pay-per-view event against a returning Deontay Wilder.

“I’ve gone back to my roots,” Helenius explains, deep in camp on Åland Island, in the middle of the Baltic Sea. “Life is simpler out here. I have my own gym and I can train whenever I want. Plus, I am also left alone. The population is only around 25,000 here, so people soon get bored of spotting me and saying hello [laughs].

“I’m channeling that Viking spirit,” he continued. “I’ve made such a commitment to eating properly over the last couple of years and I’m beginning to see a massive difference. I’ve cut out all carbs and focused on eating meats and eggs; I guess you could say Rocky-style. It seems to suit my body, which would make sense as that’s what all my ancestors would have eaten.”

Helenius speaks calmly and with an unmistakable confidence. His 6ft 7ins frame aids this self-assurance but he hasn’t always been able to hold his head high in the sport. Unlikely back-to-back victories over Adam Kownacki has seen his stock rise again following a career of scattered opportunities, some in boxing’s wilderness across Europe.

“It’s been a tough road for me in the sport,” he continued. “I have had plenty of ups and downs over 25 years, amateur and pro, but this fight gives me the opportunity to move a step closer to what I’ve always dreamed of: fighting for a heavyweight world title. We’re making sure that everything is right for this fight. I can’t let an opportunity like this pass without giving 100 per cent.”

Helenius is no stranger to Deontay Wilder. The pair have shared numerous rounds of sparring prior to the “Bronze Bomber’s” trilogy fights with Tyson Fury, and if it wasn’t for Saturday’s meeting, would consider themselves friends. This familiarity also extends to the American’s dynamite right hand; something that Helenius has had first-hand experience in receiving.

“I’ve tried a couple of those – I don’t plan to try any more. They are explosive. But we’ve done a lot in this camp to try and help avoid getting hit by one of his big shots and, to be honest, that’s what my best attributes are in general. We’ve worked a lot on head movement, reaction time and footwork. This is what enabled me to be so successful as an amateur so it comes pretty naturally to me.

“But Deontay is a good dude. We’ve shared plenty of good moments in camps, but he knows as well as I do that it’s purely business now. I’m not that kind of guy that is going to talk smack about another fighter anyway. But I am happy to turn my emotions off and show aggression inside the ring.”

If irons sharpen irons, then Helenius’ tools should be well honed. He has shared previous camps with Wladimir Klitschko, Alexander Povetkin, Anthony Joshua and David Haye, as well as gaining priceless experience from over 250 amateur fights across the globe. He is the definition of seasoned and is a true believer that heavyweights can reach their peak at a mature age.

“I’m ready to bring my A-game,” he continued. “Being an underdog has always suited me. It fires me up way more than when I am in danger of overlooking an opponent. The adrenaline will be pumping like never before on Saturday and that will help me.

“Aggression is going to be key in this fight. I am going to need to push Deontay forward and not let him dictate the pace. He is an excellent boxer; he has shown this time and time again.”

Wilder hasn’t fought since a second loss to Tyson Fury in October last year. His record now reads 42-2-1 (41), with the “Gypsy King” holding the mantle of the only fighter that Wilder hasn’t been able to keep glued to the canvas as a professional. But Helenius doesn’t feel that these back-to-back losses will overly affect the mindset of the Alabama fighter.

“I’m preparing as if Wilder is still unbeaten,” he admits. “I don’t believe the Fury fights will have taken too much out of him. Plus, he was able to show real improvements in the third fight. I’m in the best shape of my life, and due to my conditioning, I should be able to stay fully switched on for the whole 12 rounds, something that other fighters have struggled with against Wilder.

“If anything, he [Wilder] has shown a real toughness in his last two fights with Fury, something that we didn’t really know prior to that, so I am going to have to be prepared for this. At the end of the day, Wilder is just another obstacle in the way of me achieving my dream.”

Helenius is convinced that he has put in all the necessary work to end Saturday night inside the Barclays Center, Brooklyn, as the victor. A dedicated schedule of a morning eight kilometre run and afternoon boxing work is bookended by the devouring of a “kilogram of meat” and his ability to avoid any serious injuries for the first time in his career is unearthing new benefits.

But whatever the result, Helenius is in the business of squeezing as much life out of his career as possible. “There are plenty of good years left in me,” he says with conviction.