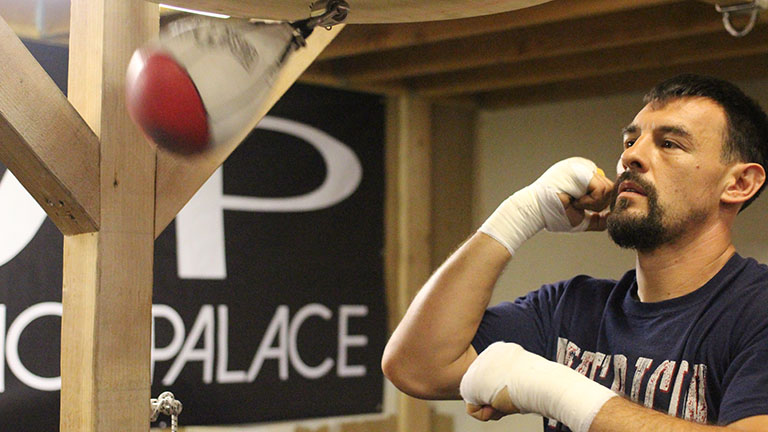 ROBERT “The Ghost” Guerrero (33-4-1, 18 KOs) returns to action on Saturday night in a 10 round rebound fight against Argentine welterweight David Emmnauel Peralta (25-2-1 14 KOs).

Guerrero, who lost to current WBC World welterweight champion Danny Garcia in his last outing, hopes that a win this weekend will serve as a springboard to another world title shot at 147 pounds.

“I’m focused and the fans can expect to see me leave everything in the ring like always,” said Guerrero at Thursday’s press conference.

His opponent, Peralta, will be fighting in the biggest fight of his career on Saturday and competing outside of his country for the first time as a professional.

“I want to go down the same path as Marcos Maidana and Lucas Matthysse,” said Peralta at Thursday’s press conference. “They were given great opportunities in their careers and took advantage of them. I am going to take advantage of this opportunity.”

In 2011, Peralta was knocked out in the 5th round in his attempt to earn the Argentinian Boxing Federation belt at light welterweight. He also competed against countryman Cristian Nestor Romero in April of 2015 for the vacant IBF Latino welterweight title but lost a narrow split decision. The rest of his resume reads like that of a high-level club fighter.

Needless to say, aside from a considerable height advantage over his opponent, Peralta may be a bit overmatched against a former multiple division world champion who has previously shared the ring with the likes of Danny Garcia, Andre Berto, Keith Thurman, and Floyd Mayweather.

“I got a chance to size him up today,” said Guerrero. “I saw how tall he is. Picking my spots – seeing where I have to go. After looking at him, I know he’s coming to fight. I’m expecting a war. This is like a world title shot for him. I don’t know what he is going to bring to the table and that is exciting for me.”

Putting aside the promotion, on paper, this is a gross mismatch cut from the same cloth as Garcia-Salka, which the WBC refused to sanction as a title defense, and Quillin-Zerafa, which ended with Zerafa being wheeled away on a stretcher.

An impressive win for Guerrero will likely lead to another big name fight for the former champion. And in a Peralta loss, we can only hope that he returns home safely with Los Angeles traffic having been the most precarious of his stateside activities.