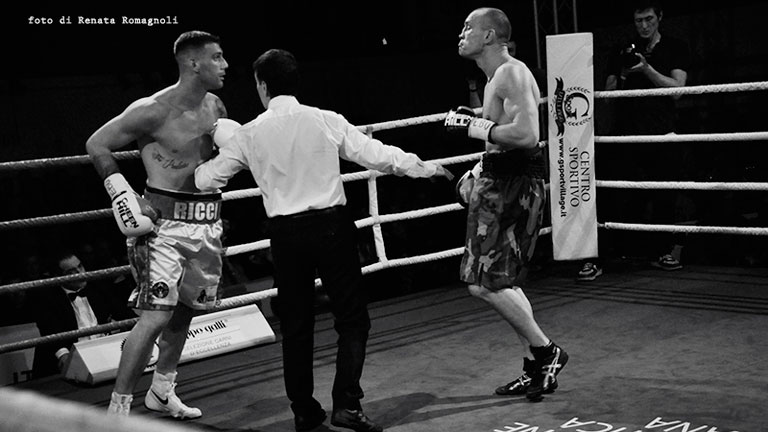 Saturday night in Rome we were treated to a good old-fashioned riot which will unfortunately overshadow a dramatic come-from-behind victory by Ukrainian everyman Sergey Demchenko over local fighter Mirco Ricci for the vacant EU light heavyweight title.

Everything exploded after referee Massimiliano Bianco waved the fight off in the tenth round with Ricci in trouble on the ropes. Ricci’s numerous followers, who had been milling – against regulations – behind their fighter’s corner all fight, started exchanging blows with the vastly outnumbered security guards. Out of nowhere, and possessed by who knows what lunatic reasons, professional boxer Andrea Pesce broke out of the pack and attacked the night’s promoter, Davide Buccioni. At that point Ricci’s fans charged along ringside upturning tables, throwing chairs and attacking anybody in range. It’s unclear what set them off or who their target was. This reporter was punched in the back of the head while trying to protect two elderly ladies and international referee Adrio Zannoni (who did the Groves-Rebrasse fight in Britain, amongst others) received a head wound from a flying chair. Things gradually calmed down, partly due to the intervention of the police, but the damage had already been done, both literally and figuratively. Boxing is already a marginalised sport in Italy, some way behind sports such as cycling or volleyball in terms of exposure and popularity, and is still considered by many as a refuge for delinquents and bloodthirsty voyeurs. Sadly, events like these only contribute to the misconceptions that the sport is some kind of crude primal circus attended by louts.

All of which is a shame for Demchenko. 36 years old, a heavy underdog with the bookies and 1-6-1 going in, this victory was some achievement for him. Still, to close observers of the Roman scene, the result wasn’t a total surprise. Though Ukrainian, he is a naturalised Italian and fighting in his adopted hometown of Rome would have been a welcome change from the late-notice opponent jobs he had been taking abroad. Additionally, despite being fairly stiff and slow, he’s game to the end and a heavy, clubbing puncher – potentially a dangerous proposition for a talented but lazy fighter like Ricci with question-marks over his durability and fitness.

The pattern of the fight saw the elusive Ricci (12st 6lbs) use the ring, pull out his usual repertoire of ‘tricks’ – tongue-pulling, windmilling his arms, offering his chin – and occasionally throwing fast and hard shots while the Ukrainian (12st 5lbs) dutifully trudged after him. Demchenko sometimes got through with an agricultural right hand or reaching jab and, as the fight wore on, had increasing success to the body when Ricci, not under any particularly intense pressure, would lazily lay on the ropes.

The Roman fighter gradually started to slow as the rounds went by and Demchenko, without having up to up the pace, found that he was able to keep his target in range just that little bit longer. Towards the end of the ninth Ricci was bothered by a right hand and he suddenly looked disorganised and unsure of how to get through the follow-up attack. He hadn’t recovered at the start of the tenth and a Demchenko right quickly had him backed up against the ropes where he took several unanswered head-jolting shots before Bianco stepped in. At the time of the stoppage Zannoni and Luca Montella had it 86-85 for Ricci while Luigi Muratore saw it by the same score for Demchenko.

Ricci drops to 17-3 (5) and his future in the sport has to be seriously questioned. It seems unlikely that he can progress beyond Italian level without major changes to the way he approaches a fight and unfortunately the repeated disgraceful behaviour of his fans raises the question as to whether he is employable in a public event. Demchenko goes to 16-9-1 (12) and hopefully the EU title will bring some well-earned paydays.

The undercard of this Buccioni Boxing Team show featured three young fighters from the Lazio region in six-rounders.

In his amateur days, Alessandro Micheli (9st 8lbs) stood out for his precocious brute strength and asphyxiating tempo, a raging man-boy who would swamp and subdue slighter fighters with his charging attacks. After six fights as a pro, the former Italian national youth champion (a tournament open to amateurs between 17 and 19 years old) is discovering that such attributes are not as effective against grown men over the longer distances. His crude steam engine rushes won him the first couple of rounds against the shifty and spry Peruvian, Eder Barreto (9st 6lbs), but even early on he was telegraphing his attacks. As soon as Micheli’s intensity started to wane, Barreto was able to settle down and slot through enough punches – especially right uppercuts in the final round – to earn a draw. Scores were 59-55 for Micheli, 58-56 for Barreto and 57-57. Micheli is now 5-0-1 (1) and could do with starting his attacks with a jab and a step rather than with the same old shoulder dip and leaping left hook. Barreto, always a tricky adversary, is now 8-7-3 (2).

Mattia Faraoni, Italian national amateur champion in 2014, is one of the more touted of the new generation of Roman fighters. He moved to 3-0 (1) with a surprisingly close win (58-55 and 57-56 twice) over Francesco Cataldo at cruiserweight. Despite looking tense and appearing to tire relatively early, Faraoni’s sharper single pot-shots and deceptively nimble movement (perhaps due to his long background in karate) seemed to have bagged him the first five rounds. The ever-game Cataldo (13st 10lbs) had him in a little trouble in the final round and a somewhat ragged Faraoni (13st 12lbs) also had a point deducted for repeatedly lowering his head. It was perhaps a little premature for Faraoni to be in a six-rounder. Cataldo, ten years his senior at 34, returned to the ring after two years out and is now 2-2 (1).

The opening bout of the night saw 22-year old Vincenzo Bevilacqua (11st 2lbs) outpoint Latvian Konstantins Sakara (11st), a veteran of the European circuit who has extended the likes of European champion Cedric Virtu. Bevilacqua was a comfortable winner (60-54, 59-55 and 58-55), but was maybe too comfortable. From a fighting family and with a decent amateur career, he looks at ease in the ring, rarely rushed and a good reader of his opponent. However, there was a lack of intensity and variety about his work – he relied largely on sporadic single counters to win the rounds – that could leave him ill-prepared against a more dogged and dynamic opponent. He is now 7-0 (no stoppages) while Sakara – who has a misleadingly high number of stoppage victims on his record – drops to 14-35-3 (12).