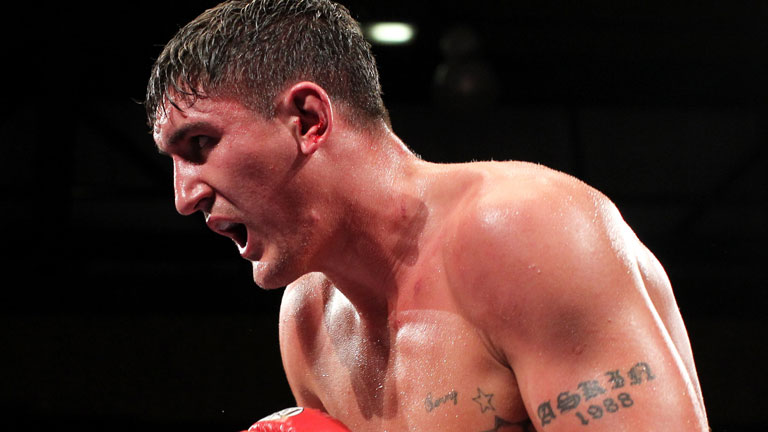 IN the main event at a sold-out York Hall, Blackpool’s Matty Askin retained his English cruiserweight title against Swindon’s Lawrence Bennett in bizarre style. Their war of words at the weigh-in was unresolved as the fight was called off in the first round. They tied each other up in close quarters, failing to acknowledge the referee’s command of ‘break’, and fell through the ropes and out of the ring as they refused to let each other go. Bennett managed to walk away from the commotion but paramedics carefully moved Askin onto a stretcher, as he was unable to continue.

The Shaun Messer-officiated bout was declared a technical draw.

Ex-pro footballer Leon McKenzie – a Croydon southpaw – is mandatory challenger for the vacant British super-middle title after stopping Edinburgh’s John McCallum. McKenzie jabbed well, picking his shots with his big left, and proving too much for McCallum, whose eyes were heavily swollen. In the sixth, McKenzie landed some hooks and at the end of the round referee Phil Edwards accepted the corner’s retirement with a gaping cut obscuring McCallum’s vision.

Joe Mullender secured a sixth-round stoppage over Barnsley’s Ben Davies in an exciting toe-to-toe brawl. Mullender’s power and workrate proved too much for Davies. Ben had no reply and in the sixth, Mullender’s body shots caused referee Lee Cook to step in at 1-42. Brentwood’s Mullender is now mandatory challenger to Lewis Taylor’s English middle title.

Fareham’s Floyd Moore won the Southern Area lightweight title against Gloucester southpaw Dan Carter with a savage body blow in the fourth round. Moore’s class showed through after some early exchanges, knocking Carter down twice with blasts downstairs, persuading referee Cook to halt the fight at 1-57.

Brentwood’s Kris Agyei–Dua claimed the Southern Area super-welterweight crown in three rounds as Canning Town portsider Freddie Turner retired on the floor, rupturing a knee. Turner had Agyei-Dua down in the first and was controlling things until the stoppage at 2-01 of the third. Mr Cook was the referee.

Another member of the Upton clan, Sonny Upton, of Hyde, stopped Norwich’s Duane Green before the fifth via corner retirement. Green’s left eyebrow was split and he was unable to box on. Mr Cook refereed.

Canning Town southpaw Camacho shook off the ring rust with some solid jabbing, but Marinchev didn’t let him have it all his own way, landing meaty
left hooks and cutting Wadi’s right eye.

Rainham’s Charlie Duffield impressed on his debut via third-round stoppage over Brighton’s Iain Jackson. Duffield caught Jackson with a right hook and referee Cook stopped the contest at 1-32 with Jackson’s eye heavily bleeding.

Folkestone’s Josh Kennedy secured a second-round stoppage over Bulgarian Slaveya Stefanov. Kennedy floored him in the first round, and three times in the next with lefts downstairs. Stefanov failed to make referee McCann’s count, which was completed at 2-42.

Strood cruiser Louie Darlin was held to a draw against Latvia’s Reinis Porozovs in a scrappy affair. Porozovs was guilty of excessive holding. Mr McCann scored 38-38.

The Verdict:A great small hall show – plenty of action and thoroughly enjoyed by the crowd.