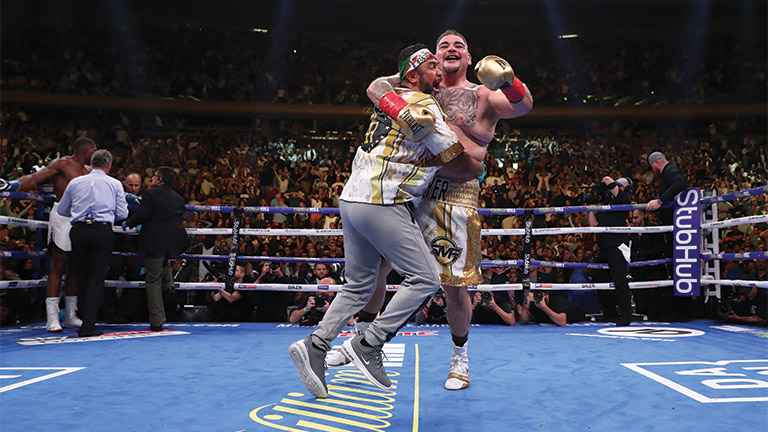 Matt Christie on the defining moments of 2019, including Andy Ruiz's astonishing victory

From ringside, Josh Taylor’s victory over Regis Prograis was hard to beat. It was nip and tuck all the way, but what impressed me the most was how both adapted to the evolving tactics of their opponent. The courage and determination on show, as both gave everything over the 12 rounds in pursuit of victory, was also awe-inspiring. The drama was born purely of two exquisite skill sets, as opposed to any mistakes being exposed – which is a rarity in boxing.

Take your pick from either of the above. At the end of 12 rounds I struggled to name a winner (scoring 114-114). From the TV screen, Vasyl Lomachenko and Terence Crawford impressed me the most while Naoya Inoue continues to excite. At the very top, boxing has some serious talent.

For sheer drama, it has to be the left hook from Andy Ruiz Jr that triggered Anthony Joshua’s downfall. All the better because Joshua’s two-punch volley that decked Ruiz immediately beforehand was also highly impressive – and long forgotten as a consequence of how that fight ended. Honourable mention must go to the fight-ending bomb Deontay Wilder dropped on Luis Ortiz.

Without question, Madison Square Garden in June when Ruiz Jr stunned Joshua. The epic battle between Katie Taylor and Delfine Persoon lifted the expectation levels on the undercard before the most unexpected story of the year unfolded. Even as it became clear Joshua was on the brink of defeat – far from an ideal result for British boxing – the sense of astonishment in the air was invigorating.

Sitting in the pouring rain didn’t help, but Filip Hrgovic’s foul-laced win over a disinterested Eric Molina is what springs to mind for this one. Also in Saudi but on a different bill, Amir Khan’s win over Billy Dib provided an atrocious advertisement for boxing. Thankfully, I wasn’t present for that one.

They all involve Andy Ruiz Jr. Atop the list is him jumping all over the ring like a spring-loaded sandbag after beating Joshua. Second is his gut dribbling all over his shorts in the rematch when it became clear he’d underprepared and cheated everyone out of the rematch they craved. And third was when I set eyes on him for the first time in New York: He walked into the interview room and I was convinced it must be his little brother because he was so short and unassuming. At that moment, I was convinced he would be blasted out with the minimum of fuss.

Eddie Hearn discussing his origins in the sport and his family life – as he described the pressure and strain his job provides – gave me a different perspective on the man who continues to divide opinion. Interviews I carried out in the wake of numerous drug scandals, ring deaths and controversies were memorable for the wrong reasons. Elsewhere, Dave Harris continued to inspire with his vision for Ringside Rest and Care while journeyman Lewis van Poetsch provided a lovely contrast to some of the more sombre chats I’d had throughout the year.