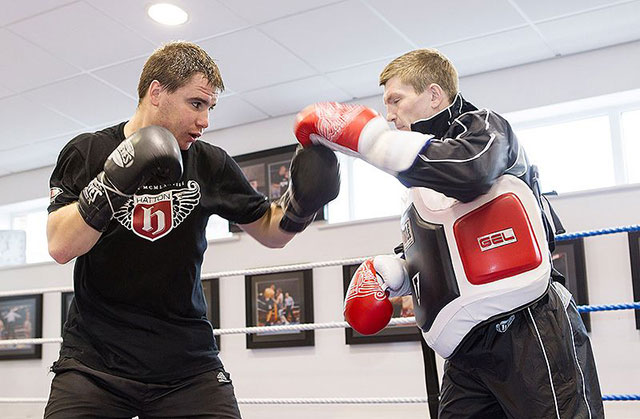 RICKY HATTON says Sergey Rabchenko’s November 12 clash with former three-time world champion Anthony Mundine is amongst the biggest he’s been involved in as a promoter.

‘The Hitman’, who also trains Rabchenko, has played a key role in world title fights involving the likes of Martin Murray and Ryan Rhodes since starting Hatton Promotions in 2009 and feels this will be an equally huge event.

Mundine was once the highest paid player in Australian Rugby League and his star has shone ever brighter since he switched to boxing thanks to victories over the likes of Sam Soliman, Daniel Geale and “Sugar” Shane Mosley.

Rabchenko will put his WBC Silver light-middleweight title and number two world ranking on the line in front of what is sure to be mammoth crowd at the Hisense Arena in Melborne and Hatton has no doubts about the fight’s importance.

“This is a mega fight between two great boxers and it’s something I’m already excited about,” Ricky said.

“I’m fortunate to have been involved in some major cards since I became a promoter and this is as good as any. Fighters such as Martin Murray, Scott Quigg and Ryan Rhodes all fought for major titles when they were with us, and now Sergey has his chance.

“Mundine is something of a celebrity in Australia so there will be a huge crowd and an intimidating atmosphere, but I think Sergey will come through the fight with flying colours.

“This is easily his toughest fight so far. Mundine has been in with the best and he has said he can’t afford to lose this fight. I just think Sergey will have to too much for him.”

Mundine v Rabchenko is promoted by Big Time Boxing in association with Hatton Promotions and Boxa. The whole show will be televised by Main Event.