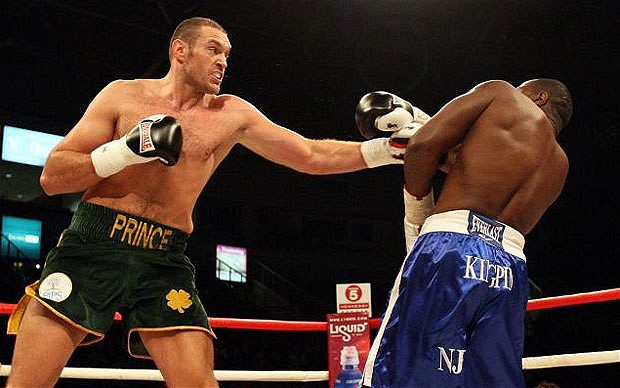 Browne and Fury are heading in the same direction, says Ricky Hatton

RICKY HATTON says his heavyweight charge Lucas “Big Daddy” Browne could fight Britain’s Tyson Fury…but it’s unlikely to happen until one of them has a world title.

Despite being well-acquainted outside of the ring, Browne and Fury have talked about facing each other in the past and Hatton believes a clash is inevitable providing that they both keep winning.

Victory should put the hammer-fisted Aussie in touching distance of a showdown with either WBC boss Bermane Stiverne or ‘regular’ WBA belt holder, Ruslan Chagaev.

“We’re pushing Lucas towards a world title fight now and if he could beat either Chagaev or Stiverne, then a defence against Fury would make a lot of sense,” Ricky said.

“Lucas is ranked ahead of Tyson by the WBC so will probably get a shot first, but if Tyson gets there before him then great because he’s already said he’d defend against Lucas.

“Lucas and Tyson are very similar in many ways. They’re both fearless and they don’t care who they fight. Lucas has been asking to fight Tyson for 12 or 18 months and, when the time is right, I’m sure Tyson would oblige.

“It’s not a case of two fighters avoiding each other, it’s a case of them both eyeing world titles and if they’re paths cross, so be it.

Despite world titles and a potential clash with Fury being on the cards, Hatton says Lucas cannot afford to get distracted from his task on Friday night.

Rudenko was previously in the frame for a European title fight with Dereck Chisora and he’s amassed an impressive record of 24 wins with 16 KOs.

“It’s a tough fight. Rudenko is a good boxer, he’s got a good record and he a decent knockout percentage so he could make it very difficult for Lucas,” Ricky said.

“Lucas is at a stage where there’s no easy fights for him. He can’t overlook Rudenko and I’m sure he won’t. I’m expecting another exciting performance from Lucas.”