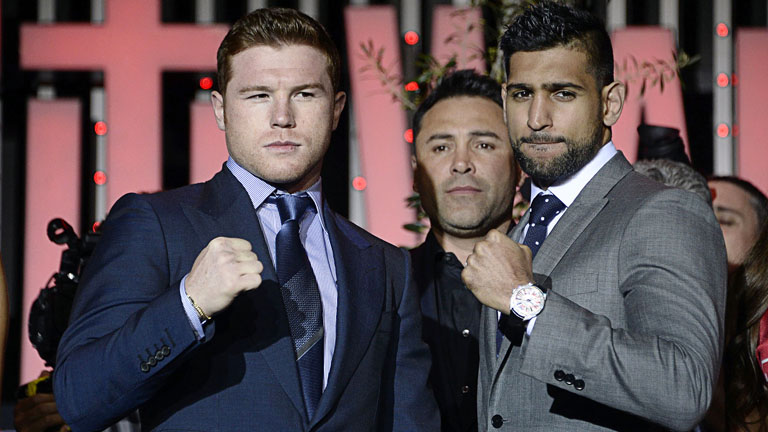 RICKY HATTON feels Amir Khan will make history if he upsets the odds and beats Canelo Alvarez in Las Vegas this weekend.

A former world super-lightweight champion, Khan recently moved up to welterweight but will fight Canelo at 155lbs for the WBC world middleweight crown.

Khan is a fairly heavy underdog against the Mexican hero, whose only defeat came to Floyd Mayweather in 2013, but Hatton feels the Bolton native has the assets to prevail.

“It [the announcement of the fight] came as a shock to everyone. Amir doesn’t shy away from a challenge and you’ve got to give him credit where it’s due,” he told Boxing News.

“He’s got the tools to beat him in the sense that he has fast feet and I don’t think Canelo has particularly fast feet. So if he can use his speed, in and out, in and out, he has the tools to do it but it is a big ask, to keep out the way for 12 rounds.”

Hatton pulled off a mammoth win of his own in 2005 when he forced pound for pound-ranked Kostya Tszyu to retire after 11 rounds to lift the IBF world super-lightweight title.

He was unable to match that feat when he twice travelled to Vegas to fight Floyd Mayweather and Manny Pacquiao, both of whom stopped him inside the distance.

Though he is aware of how difficult the Canelo fight will be for Khan, Ricky believes Amir has a chance to go down in British boxing history.

He said: “If he does win it, not moving up one weight but two weights against someone like Alvarez, I think it will go down as one of the greatest British wins we’ve ever had.”